Collenchyma tissue is a term given by a scientist named Schleiden in the year 1839. It is a kind of simple permanent supportive tissue that confers mechanical strength to the plant. The collenchyma cells appear as elongated cells with a non-uniform thickened cell wall.

Collenchymatous cells originate by the modification of parenchyma tissues into the cells, which comprises a thickened cell wall due to the deposition of cellulose, hemicellulose and pectin like substances.

It exists under the epidermis layer of stem, leaves, petiole etc. and may or may not contain chloroplast. Collenchyma tissues are of many types, based on their location and cell arrangement. This post describes the definition, characteristics, types, structure and functions of the collenchyma tissue.

Collenchyma tissue refers to the simple permanent tissue, which comprises axially elongated cells with a non-uniform and thickened cell wall (composed of pectin, cellulose and hemicellulose). Collenchymatous tissues are sometimes associated with vascular bundles and generally located in the hypodermis layer (underneath the epidermis).

Collenchyma cells lack hydrophobic components. It only gives mechanical strength to the plants when the cells are in a turgid state. It possesses a prominent nucleus with developed cell organelles and compact cell arrangement.

Depending upon the pattern of wall thickening and cell arrangement and their location, the collenchyma tissues are classified into the following types: 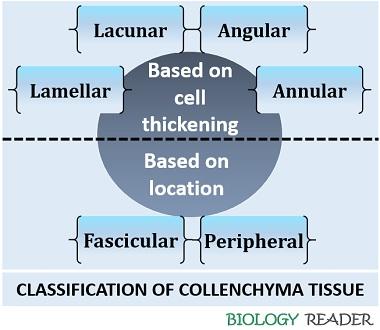 It seems polygonal in shape. The thickening pattern of the cell wall is towards the corner. The extra-wall material deposits on the vertical walls where the cells meet.  It has a compact cell arrangement with no intercellular spaces.
Example: Petioles of Cucurbita in the hypodermis layer.

It refers to the plate or tangential collenchyma, which possesses longitudinally elongated cells. The thickening pattern of the cell wall restricts the tangential walls. The intact rows of cells are arranged tangentially, leaving no intercellular spaces.
Example: Stem of Sambucus in the hypodermis layer.

It refers to the tubular collenchyma, which possesses spherical or oval-shaped cells. The thickening pattern of the cell wall is towards the direct contact of intercellular spaces.
Example: Petioles of Salvia, Malvia etc., in the hypodermis layer.

In this type, the collenchyma cells are located below the outermost epidermis layer and concentrated by one or more layers of parenchyma cells. It further subdivides into two kinds:

Here, the collenchyma cells are located in distinct regions with respect to the vascular bundles. Depending on the different locations, the fascicular collenchyma has the following three kinds:

Both the cell shape and size of collenchyma cells vary considerably depending on various factors like plant age, plant type etc. The length of the cell is approximately 2.5 mm. The shape ranges from small spherical or polyhedral cells to long, tubular-like cells with narrow ends.

A collenchyma cell is living in nature and having a vacuolated protoplast. Chloroplasts are rarely present inside the collenchyma cells. Primary pit fields are also observable under the microscopic study. Collenchyma cells either possess small or leaves no intercellular space.

The scientist Anderson reported that the cell wall consists of firmly packed, interspersed cellulose with pectin lamellae in 1927. In addition to these two, some scientists have reported the presence of hemicellulose.

Cellulose is a polysaccharide that exists as a linear insoluble microfibril. Pectin is also a polysaccharide that has glue-like or adhesive properties. Pectin deposition prevalently occurs at the time of primary cell wall thickening. Hemicellulose includes xylans, mannans etc., whose function is to provide cell rigidity in combination with cellulose.

Therefore, a collenchyma cell is a supporting tissue whose cell wall material is irregularly distributed, due to which it has uneven cell wall thickenings. It is characteristically found in stems, leaves etc., of dicotyledonous plants.

Thus, we can conclude that the collenchyma tissue has three primary features like the presence of a living protoplast, thickened cell wall and axially elongated cells.