The major groups of microorganisms are broadly classified into bacteria, fungi, protozoa, algae and viruses, which are highly diversified in nature. The microorganisms show huge diversity among each other, but these can be broadly grouped into the five major groups that we will discuss in this content.

Moreover, all types of microorganisms that belong to the different groups will show a characteristic difference in the properties like cell composition, morphology, mode of nutrition, pathogenicity, replication, reproduction etc. Some microorganisms are considered as good microbes, as some provide nutrients to the plants, few bacteria in the human digestive system also maintain the human health and most importantly microbes like fungi and bacteria decompose the dead organic matter.

But, as the coin has two sides, some microorganisms are pathogenic too that can adversely affect the plants as well as animals. In this context, we will mainly discuss the five different groups of microorganisms along with the comparison chart and their biological significance.

Microorganisms can define as the small living creatures that are sometimes not visible to the naked eye. Therefore, its study becomes important for us to know more about microorganisms like its cell structure, cell components, genome, distribution, effects etc. Microorganisms are beneficial while some are deleterious.  All the major groups of microorganisms show a practical significance in many fields like medical, research, industrial, environmental biology etc.

There are five major groups of microorganisms including:

Cell properties: Bacteria is a prokaryotic cell (having a primitive nucleus) and unicellular.
Size: It ranges from 0.2-100 µm.
Shape: Bacteria are pleomorphic in nature. It possesses variable shapes as given in the diagram below:

Distribution: Worldwide.
Habitat: Soil, water, earth crust, dead organic matter, hot springs etc.
Movement: For its movement, it has a whip-like structure called “Flagella”.
Nucleus: True nucleus absent.
Genetic material: The genetic material of bacteria can be either DNA or RNA.
Types: Bacteria can be either Gram-positive or Gram-negative based on cell wall characteristics. Depending upon the cell shape, bacteria typically exist in five forms, viz. Bacillus, Coccus, Vibrio and Spirillum.
Resistance: Some strains of the bacteria are resistant to adverse conditions like high Ph, temperature, high salt concentration and many antibiotics etc.
Nutrition type: Heterotrophic or autotrophic
Chlorophyll: Present in photosynthetic bacteria like purple and green bacteria.
Reproduction: Bacteria reproduce by both asexual and sexual method. Asexual methods include budding, fragmentation and most commonly binary fission. Sexual methods include transformation, transduction and conjugation.
Absorption: Bacteria absorb nutrients with the help of flagella that is used to trap the food or other organisms.
Nature: Some bacteria are symbiotic and parasitic in nature.
Morphology: Simple
Carotenoids: Wide variety of carotenoids are present in a class of bacteria.
Oxygen requirement: On the basis of oxygen requirement bacteria, can be aerobic, anaerobic and facultative anaerobes. 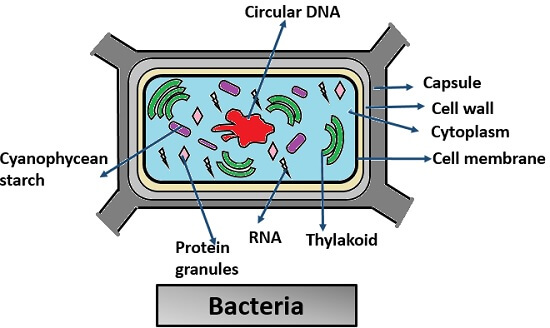 Cell properties: Fungi are eukaryotic and it can be multicellular or unicellular.
Size: The size of moulds ranges from 2.0-10.0 µm and the size of yeast ranges from 5.0-10.0 µm.
Shape: A fungus has two distinct morphological shapes. Its vegetative stage is characterized by the formation of a hyphal network, while the reproductive stage is characterized by the formation of fruiting bodies through the hyphae.
Distribution: Worldwide.
Habitat: Deserts, deep-sea sediments, soil, dead organic matter etc.
Movement: Fungi have no locomotory apparatus, there is only the movement of spores through air or wind.
Nucleus: True nucleus present.
Genetic material: In fungi, either DNA or RNA is present.
Types: On the basis of cell type, fungi are broadly classified into yeast and moulds. 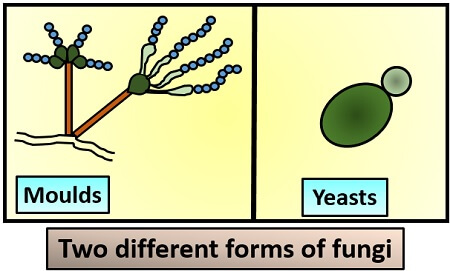 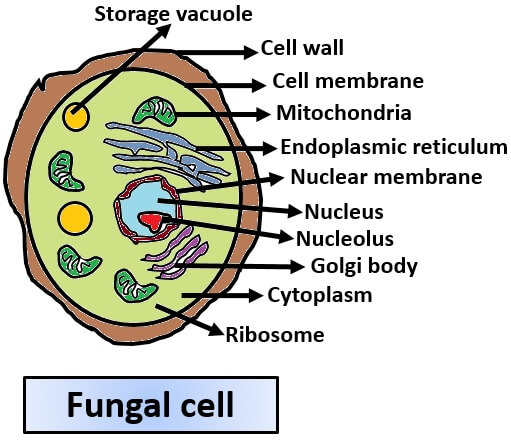 Cell properties: These are eukaryotic and multicellular.
Size: It ranges from 2.0-200  µm.
Shape: Protozoa are variable in shape.
Distribution: Cosmopolitan.
Habitat: Soil, plant, marine water, and freshwater etc.
Movement: Protozoa move through the help of cilia or flagella.
Nucleus: It contains a vesicular nucleus.
Genetic material: DNA.
Types: Flagellates, ciliates, amoeboid and sporozoans are the four types of protozoa.
Resistance: Some parasitic protozoans are drug-resistant.
Nutrition type: Most of the protozoans are heterotrophic and a few are autotrophic.
Chlorophyll: Few protozoans contain green chlorophyll pigment.
Reproduction: Protozoans reproduce by budding, binary fission, schizogony, multiple fission etc.
Absorption: Protozoa uptake food by cytosome present on the cell wall with the help of flagella or pseudopodia.
Nature: Protozoans are Paraphyletic in nature.
Morphology: Complex.
Carotenoids: Present.
Oxygen requirement: Most of the protozoans are aerobic. 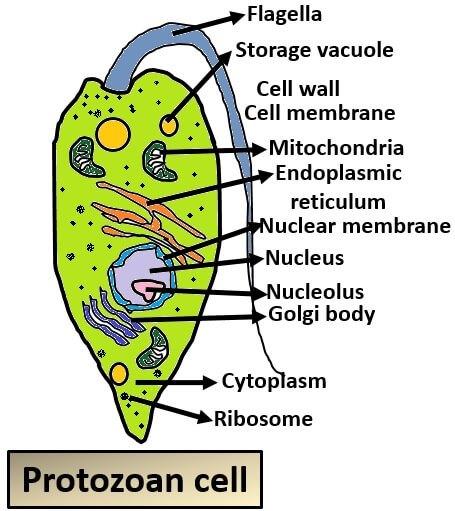 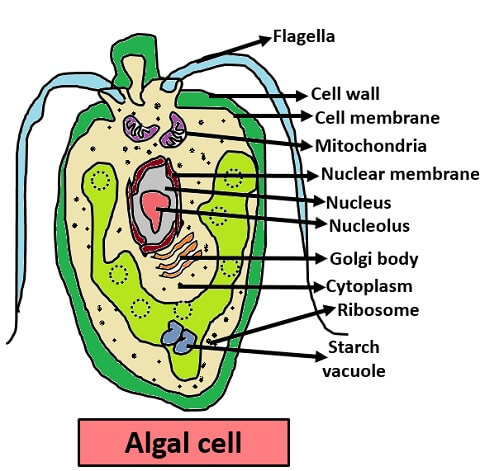 Cell properties: Virus are prokaryotic and acellular microorganisms.
Size: It ranges from 0.015-0.2 µm
Shape: Its shape is generally icosahedral, while a few are spherical, helical and complex.

Distribution: Ubiquitous.
Habitat: These are mainly living inside the host.
Movement: They move into the host cell by recognition of receptor site through tail pin and tail fibres by various methods like endocytosis and exocytosis.
Nucleus: Absent.
Genetic material: In viruses either DNA or RNA is present.
Types: Viruses are broadly classified into a plant, animal and human virus on the basis of their effect.
Resistance: These are resistant to many drugs or antibiotics.
Nutrition Type: Parasitic.
Chlorophyll: Absent.
Reproduction: Viruses replicate inside the host via lytic and lysogenic replication cycle.
Absorption: Its absorption is through tail fibres.
Nature: Viruses only share a parasitic relationship with other organisms.
Morphology: Simple.
Carotenoids: Absent.

Comparison Chart of the Five Major Groups of Microorganisms

Biological Significance of the Five Major Groups of Microorganisms

Some microorganisms are beneficial and some are detrimental so on the basis of this, they play a significant role in an ecosystem:

The significance of bacteria: Bacteria can be pathogenic as well as non-pathogenic. Pathogenic microorganisms cause many diseases in plants, animals as well as humans. Some play an important role in a symbiotic association, nitrogen fixation, nutrients recycling. Some bacteria cause food spoilage while some are used in the food industry.

The significance of fungi: Fungi are also pathogenic and non-pathogenic. Pathogenic fungi cause diseases in all plants, animals and human. Biologically important fungi play an important role in food industries for the production of alcoholic beverages, bread and other food supplements, medicines etc. Others play a vital role in the decomposition of organic matter, symbiotic association with algae etc.

The significance of protozoa: Most of the protozoans doesn’t cause diseases, but some may cause a severe effect on the living system. They significantly function like the producers or they act as food material for other microorganisms. It shows a symbiotic relationship with the associative organisms and also acts as an organic pollution indicator.

The significance of algae: Algae produce toxic substances that cause several infections. Others play a significant role in the preparation of microbiological media, pharmaceuticals preparations and biofertilizers. Algae also act as a pollution indicator and it is also being used as a food supplement.

The significance of virus: Virus is the type of microorganisms which are only pathogenic and causes severe diseases in plants, animals and humans, therefore these are important in the field of medical biology.