There are three modes of replication introduced during the 1950s like conservative, semi-conservative and dispersive. The researchers were confused between these three that what could be the actual pattern of DNA replication. In 1958, Matthew Meselson and Franklin Stahl presented their research, where they concluded that the replication of DNA is semiconservative type.

Matthew Meselson and Franklin Stahl have conducted several experiments after the discovery of DNA structure (by the two scientists Watson and Crick). Watson and Crick’s model is widely accepted to demonstrate the replicative model of DNA. We will discuss the definition, steps and observation of the Meselson and Stahl experiment along with the semi-conservative model of DNA.

Definition of Meselson and Stahl Experiment

Meselson and Stahl Experiment gave us the theory of semi-conservative replication of DNA. They have taken E.coli as the model organism and two different isotopes, N-15 and N-14. The N-15 is the heavier isotope, whereas N-14 is the lighter or common isotope of nitrogen. Meselson and Stahl performed their experiment by first growing the E.coli in the medium containing 15NH4Cl for several generations. They observed that the heavy isotope has incorporated in the genome of E.coli and the cells become more substantial due to 15N heavy isotope.

Meselson and Stahl then transferred the E.coli cells incorporated with 15N isotope to the medium containing 14NH4Cl for several generations. After every twenty minutes, the E.coli cells multiply. For the processing of DNA, the cells were centrifuged by the addition of Caesium chloride, resulting in the formation of the concentration gradient. As a result, light, intermediate and heavy DNA strands will get separated.

After completing their experiment, Meselson and Stahl concluded that after each cell division, half of the DNA would be conserved for every next generation. Therefore, this experiment proves that the DNA replication obeys the semi-conservative mode of replication in which 50% of the DNA conserve for every next generation in a way like 100%, 50%, 25%, and 12.5% and so on. 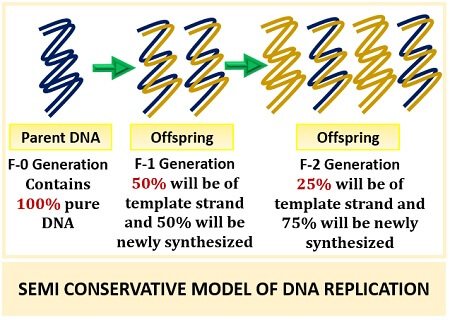 After the F-1 gen, the multiplication of the cell will get double, which will produce four DNA strands (in F-2 gen). In F-2 gen half of 50%, i.e. only 25% of DNA is conserved by having parental strands, and the remaining 75% will produce newly synthesized strands.

Meselson and Stahl performed a series of an experiment, which includes the following steps: 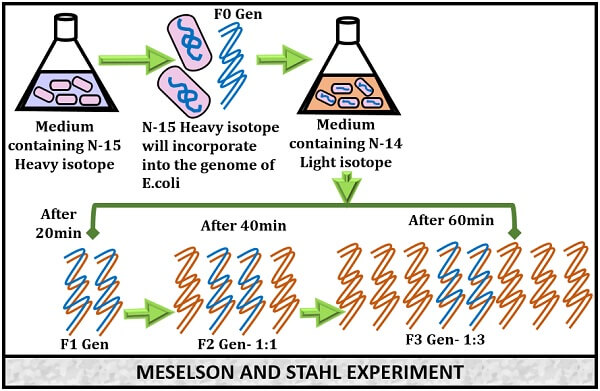 After centrifugation, the DNA separates based on mass or density. Different DNA bands like heavy, intermediate and light DNA forms as a result of the concentration gradient created by CsCl. 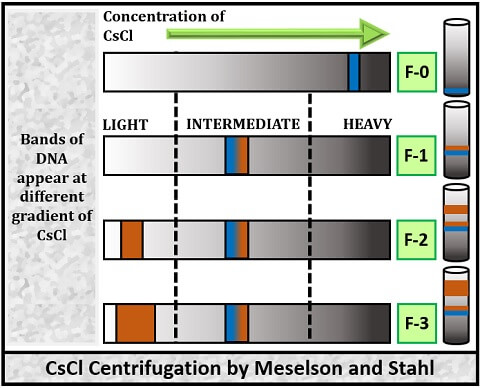 The result, after two generations of E.coli, the following results were obtained: 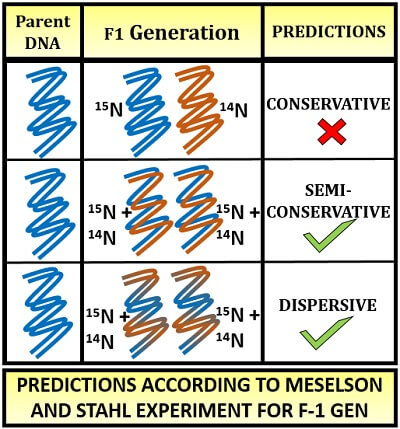 In the F-1 generation: According to the actual observations, two DNA strands (with a mixture of both 15N and14N isotopes) will produce in F-1 gen. The above diagram shows that the semiconservative and dispersive model obeys the pattern of growth explained by Meselson and Stahl. 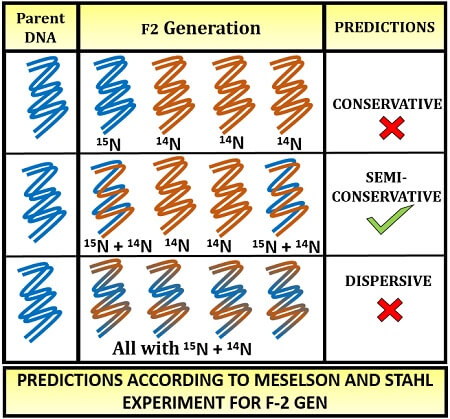 In the F-2 generation: According to the actual observation, four DNA strands (two with hybrid and the remaining two with light DNA) will produce in the F-2 generation. The hybrid DNA includes a mixture of 15N and 14N. The light DNA strands contain a pure 14N. The diagram shows that only semi-conservative type of replication gave similar results conducted by Meselson and Stahl. Thus, both the conservative and dispersive modes of replication were disapproved.

Therefore, we can conclude that the type of replication in DNA is “Semi conservative”. The offsprings have a hybrid DNA containing a mixture of both template and newly synthesized DNA in the semi-conservative model. After each multiplication, the number of offspring will double, and half of the parental DNA will be conserved for the next generation.