Synapse is a term pioneered by Charles S. Sherrington in 1897. It is derived from the Greek word “Synapsis”, which means to conjugate or clasp. The communication between the neurons is through synapses only, which facilitate nerve signal transmission from one to the next cell.

A scientist named Sanford Palay observed the ultrastructure of neural tissue to prove the subsistence of synapse. Synapses function as a key junction in the nervous system, without which a signal cannot reach the brain directly.

Electrical synapses can directly pass the nerve impulse to neighbouring cells during the time of fast defence responses. On the other hand, chemical synapses involve the excitation of a nerve impulse that causes the release of neurotransmitters, which can carry the signal further via binding with specific cell receptors.

In this post, we will learn the definition, types (based on neuron attachment and presence of neuroreceptors and neurotransmitters) and function of the synapses. Also, the mechanism and diagram of electrical and chemical synapses have been explained.

Synapses or neuronal junction refers to a region that conjugates and coordinates signal transmission activity between the two adjoining neurons. It forms a neuronal network to coordinate the tasks performed by the central nervous system and peripheral effector cells. Synapse has the following elements:

Synapse is generally classified based on two attributes, one is the attachment of nerve fibres, and the other is the presence of neuroreceptors and neurotransmitters. 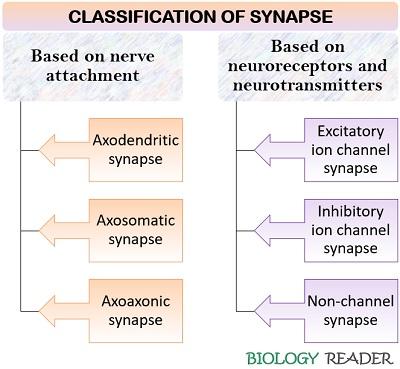 Based on the Attachment of Neurons 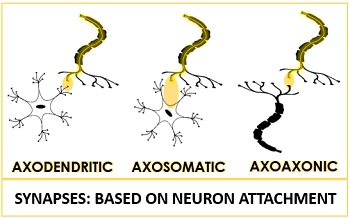 Based on the Type of Neurotransmitters and Neuroreceptors in Neurons

They produce nerve impulses, which can freely travel between the adjacent cells through gap junctions, without carrier molecules. Electrical synapses facilitate faster conduction of nerve signals. 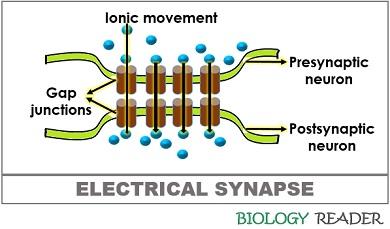 It does not require neurotransmitters, and it can conduct the transmission of information bidirectionally. Here, the ions move vigorously through the tiny apertures between gap junctions.

The movement of ions occurs in a synchronized manner, without the collision of ions. The gap between electrical synapses is approximately 3.5 nm. Electrical signals are generally excitatory.

Destruction in signal strength occurs when it travels between the neighbouring neurons. To overcome the loss, it requires a big presynaptic neuron to excite a much smaller postsynaptic neuron. 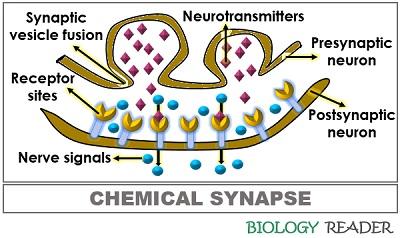 As a result, the concentration of calcium ions in the presynaptic neuron increases, which eventually cause the fusion of presynaptic vesicles with the plasma membrane.

It consequences the release of chemical messengers out of the neuron. Chemical synapse is further classifies into the excitatory and inhibitory synapse, based on its effect on nerve signal.

It promotes the propagation or conduction of an action potential. The binding of neurotransmitters to excitatory synapses leads to an opening of non-voltage gated channels.

It allows an influx of sodium or sometimes both sodium and potassium ions into the plasma membrane. The opening of the channel facilitates depolarization of the presynaptic plasma membrane, which generates an action potential.

The transmission of a nerve signal between the adjoining neurons is not a simple process. The nerve impulse must excite the synaptic vesicles to integrate them with the axon’s membrane. The dissolution of synaptic vesicles ensures the propagation of neurotransmitter molecules through exocytosis.

The chemical messengers or neurotransmitters further carry the nerve signal from the presynaptic terminal beyond the synaptic gap. Afterwards, the neurotransmitters bind with the specific cell receptors of the postsynaptic neuron or target cell. The action of neurotransmitter can be either inhibitory or excitatory, i.e. it may either excite or inhibit the neuron to which they bind with.