The nuclear pore complex encases the nuclear pore, which facilitates the translocation of macromolecules within the cell. A nuclear envelope possesses two concentric outer and inner layers fused with the NPCs. Both the phospholipid nuclear membranes are isolated by the perinuclear space in between.

The nuclear membrane works as a selective barrier protecting inner nuclear contents from the reactions occuring exterior to the nucleus. But for cell coordination, the nucleus communicates with the cytoplasm via protein channels that aid the nucleo-cytoplasmic exchange.

The protein channels are in the form of pores called nuclear pores, which help in translocating necessary ions and biomolecules within the nuclear lumen and cytosol. Each nuclear pore is surrounded by an eightfold symmetrical multiprotein complex, called the nuclear pore complex.

The nuclear pores are tiny orifices that facilitate communication between the nucleus and cytoplasm by directing the nucleocytoplasmic exchange for cell coordination. The small ions and molecules (smaller than 5000 Daltons) can diffuse freely within the cell, while specific biomolecules can travel up and down the cell via protein-mediated or active transport. Nuclear pores have a diameter and thickness of 120 nm and 50 nm, respectively. 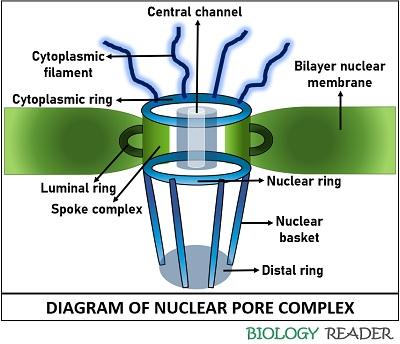 Nucleoporins scaffold: The nucleoporins mainly constitute the formation of the nuclear pore complex that massively entangles to enable selective exchange within the cell. It comprises the cytoplasmic and nucleoplasmic rings, in between which a central spoke ring is allocated. NPC appears as an octagonal ring due to the scaffolding of few nucleoporins.

Nuclear basket: It seems like a large bin-like structure associated with the nuclear ring. It enables tethering of nucleoporins inwards the nucleus lumen. This basket plays a significant role in exporting biomolecules.

A nucleus is surrounded by a selective bilayer nuclear membrane that acts as a barrier for the macromolecules of size <50 kDa but permits free diffusion of small ions or metabolites. But, macromolecules like RNA polymerase, histone proteins can enter into the nucleus, and the biomolecules like RNA and ribosomal subunits can be exported into the cytosol through active transport.

Thus, the exchange between the nucleus and cytoplasm is bidirectional that allows to and fro movement of nucleoplasmic and cytoplasmic contents. We should always remember that the necessary macromolecules can only move in and exit the nucleus, which contains a discrete amino acid sequence.

The molecules possessing specific amino acid sequences are tagged either by the nuclear localization (NLS) or nuclear export signals (NES). For selective transport, specific nuclear receptors also bind with the specific sequence of amino acids on the cargo proteins and stabilize the complex. RAN is another group of proteins that provides free energy for the active transport of macromolecules.

The NLS was first observed in the viral protein (T-antigen) that is needed for the viral replication inside the nucleus of the host cell. Nuclear localization signals are the non-cleavable amino acid sequences that are rich in lys-residues.

Both importin and exportin are the nuclear receptor proteins that are highly homologous in sequence and included in the family of karyopherins. At the time of translocation, the importins and exportins combine with the FG region on nucleoporins. A region that comprises phe-gly repeats is called FG-repeats.

Apart from nuclear receptor proteins, there is another protein named RAN that contains small monomeric nuclear GTPases. RAN protein generally exists in two conformations, namely RAN-GTP complex and RAN-GDP complex. The occurrence of RAN-GTP and RAN-GDP primarily exists within the nuclear lumen and the cytosol, respectively.

The above two complexes differ due to an asymmetric distribution of two proteins, namely GEF and GAP. GEF or guanine nucleotide exchange factor resides in the nucleus that replaces the Ran-GDP into Ran-GTP. Oppositely, the GTPase activating protein or GAP that exists within the cytosol causes hydrolysis of GTP into GDP, thus transforming the Ran-GTP to Ran-GDP.

The RAN-GAP protein confines atop of NPC, i.e. towards the cytoplasmic surface. The RAN-GDP and RAN-GTP stabilize the import and export complexes. Therefore, the RAN gradient fulfils the need of free energy for the active transport of macromolecules and also mediates directionality during the translocation.

The steps involved in the import and export cycle through the nuclear pore complex includes: 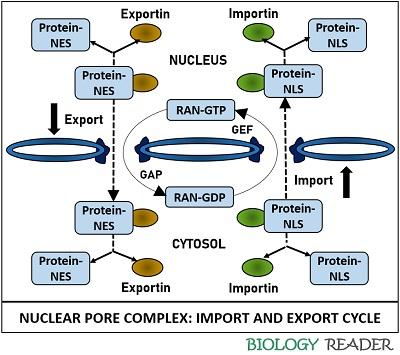 The nuclear importin receptor possesses α and β subunit. A protein cargo that is destined to be ejected inside the nucleus binds to the α-subunit through nuclear localization signal. The RAN-GDP complex that exists in the cytosol joins to the β-subunit of an importin receptor.

The above complex then binds to the nucleoporins of the NPC and finally shuttles beyond the lipid bilayer nuclear envelop. A protein cargo is then ejected into the nuclear lumen, and the remaining complex (RAN-GDP and importin) goes through conformational change within the nucleus.

The RAN-GDP interacts with the RAN-GEF, i.e. guanine nucleotide exchange factor that adds one phosphate group to the RAN-GDP complex to form RAN-GTP. An importin receptor is reclaimed back across the pore to the cytosol along with the RAN-GTP.

As we discussed earlier, the RAN-GAP (GTPase activating protein) are the proteins localized on the cytoplasmic side of NPC that cause hydrolysis of GTP. The GTPase enzyme causes deletion of one phosphate group from the RAN-GTP complex and results into dissociation of importin receptor and formation of RAN-GDP complex. Finally, an importin receptor becomes free to start another cycle.

The nuclear exportin receptor attaches with a target protein that is destined to be ejected into the cytosol. Then, the RAN-GTP complex that exists within the nucleus combines with the exportin receptor. The whole stable complex binds to the nucleoporins of the NPC and finally shuttles beyond the bilayer phospholipid nuclear envelop.

The RAN-GAP on the cytoplasmic surface of NPC causes a conformational change in the RAN-GTP by removing one phosphate group. As a result, a protein cargo dissociates from the complex in the cytosol. The remaining complex, i.e. RAN-GDP plus exportin receptor, is reclaimed back across the pore inside the nucleus.

The RAN-GEF is a protein domain found within the nucleus, which adds one additional phosphate group to the RAN-GDP complex. It results in the release of exportin receptor and the formation of the RAN-GTP complex. Finally, an exportin receptor becomes free to start a new cycle.