Nutrition in bacteria is primarily categorized into two major groups, namely autotrophic and heterotrophic. Classification of bacteria in terms of nutritional requirement typically depends on the energy sources, whether in the form of light or chemical energy. Some bacteria obtain energy directly from the sunlight. However, a few bacteria get chemical energy by utilizing inorganic and organic carbon compounds as their sole energy source.

Therefore, bacteria’s heterotrophic mode of nutrition is classified further into saprophytic, symbiotic and parasitic modes of nutrition based on the feeding mechanisms and the host type. This post describes the definition of nutrition and nutritional types of bacteria with examples.

Bacteria need micronutrients (like iron, boron, chromium, and manganese) in trace or minute amounts to perform electron transport chain reactions and other processes.

They obtain energy from direct light and the oxidation-reduction reactions of different chemical compounds present in our environment. Depending upon the energy sources, the nutrition in bacteria is mainly autotrophic and heterotrophic. Phototrophic bacteria possess bacteriochlorophyll pigments to synthesize food, while heterotrophic bacteria rely on another host for food and energy.

Depending upon the energy, electron and carbon sources, bacteria can be classified into different groups, as mentioned in the diagram below. Phototrophs and chemotrophs are the two groups of bacteria that obtain energy through direct sunlight and chemicals.

Then, lithotrophs and organotrophs represent a bacterial group that use reduced inorganic carbon and organic compounds as electron donors, respectively. At last, bacteria utilizing carbon sources are grouped into autotrophs and heterotrophs. 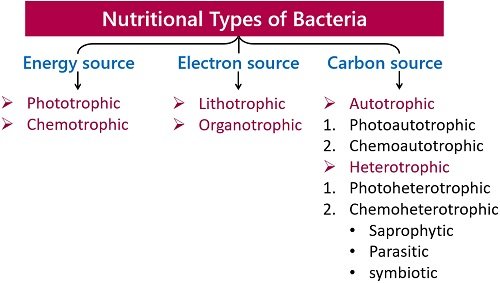 Based on Energy Source

Below, you can look into the table that mentions all the types of bacteria based on different energy sources.

Based on Electron Source

Based on Carbon Source

They obtain their-ready made food from organic substances, living or dead. These are of two types:

Therefore, we can conclude that the nutritional types of bacteria rely upon different energy sources like light energy and chemical energy to undergo various cellular processes.