Reaction centre refers to the site of photosynthetic reactions. Chlorophyll and pheophytin are the pigments found in a reaction centre. It comprises protein pigments that mediates light absorption and excitation of an electron to the higher energy state.

Photosynthetic organisms like green plants, many bacteria and algae have membrane-bound protein complexes or reaction centres that execute a transmembrane electron transfer. Photosystem I and II are the two common RCs of green plants and algae.

Photosynthetic cells further utilize ATP to produce sugars as the final product of photosynthesis by fixing atmospheric carbon dioxide. This post describes the definition, mechanism, reaction centre of photosystem 1 and 2, along with the structure and types.

A reaction centre is the active site of the organisms, which carries out photosynthesis by converting light energy into chemical form via the association of accessory pigment proteins or antenna molecules. The photosynthetic organisms use either of the two photosystems (PS-I or PS-II) or both to carry out the light absorption, electron transfer and release of free energy. The photosystem is a basic component of the light reaction. 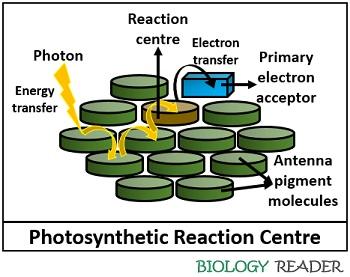 A reaction centre lies within the photosystems, which reduce the carrier molecules using light energy. Light-harvesting pigments surround the RC, which altogether contributes to an antenna complex that mediates light absorption and transfer of photons to charge the reaction centre. The difference between photosystem I and photosystem II classifies RCs primarily into two significant groups:

As the light energy reaches the RC, 2e– enter the electron transfer system. Here, light is considered the form of energy because it possesses small bunches of energy termed photons. The photons from the light energy of a specific wavelength excite electrons to a higher energy level.

Electrons are most stable at their ground state. Electrons possess the least amount of energy in their orbit during the ground state. The excited electrons return to the photosystem by releasing some energy. Later, photosynthetic cells harness the free energy to carry out the dark reaction of photosynthesis. Thus, this is the whole mechanism of a photosynthetic reaction centre.

Reaction Centre of PS-I and PS-II

The reaction centre plays a significant role in the photosynthesis of bacteria, cyanobacteria and higher plants. Oxygenic and non-oxygenic photophosphorylation are the two typical modes of photosynthesis. 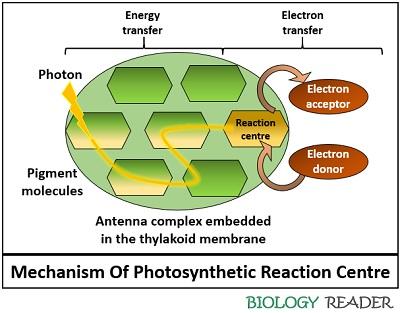 A reaction centre possesses a multisubunit complex (containing >24 or >33 protein subunits). The RC of the photosynthetic bacteria provides the best way to research the mechanism of light energy absorption by photopigments.

Hartmut Michel, Johann Deisenhofer and Robert Huber were the scientists who proposed the crystal structure of RC. On further study, it was observed that different subunits and few accessory molecules participate in the photosynthetic reaction centre.

Six kinds of photosynthetic RCs generally exist, depending on the following factors:

Type-I and Type-II RCs are the two major groups:

The reaction centre functions as a primary donor that passes the electron to the cofactors or electron acceptors in a photosynthetic reaction. The electron donors generally possess Tyr residue (TyrZ) and comprise the following elements:

The structure and arrangement of the antenna pigments associated with the RC differ variably among different photosynthetic organisms. The RC of heliobacteria possess a simple organization by having a single protein complex (contains 40 chlorophyll g pigments) that lacks auxiliary peripheral antenna proteins.

The RC of photosystem-I and green sulfur bacteria comprises light-harvesting pigments (around 100). In contrast, the RC of purple bacteria and photosystem-II comprises around six to eight pigment proteins having C2 symmetry.