Ozone formation takes place differently in the stratosphere region and the troposphere region of the earth’s atmosphere. The heat or sunlight causes chemical changes or dissociates molecules of oxygen into individual atoms, which can further react with the atmospheric oxygen to form stratospheric ozone.

In contrast, the heat or sunlight causes chemical reactions in the volatile organic compounds (VOC), nitrogen oxides (NOX) and another source of pollutants to form tropospheric ozone. Ozone is designated with a chemical formula O3, which is a combination of three oxygen atoms. Therefore, the ozone formation can occur both near the ground and high in the atmosphere.

Ozone can define as a pale blue gas that functions as a protective shield against the harmful UV light coming from the sun. It is also called trioxygen because of the presence of three oxygen molecules and often referenced as (O3). Ozone forms a very thin sheet that protects the earth by efficiently absorbing the potent UV radiation and also provides protection to human existence.

Ozone is a dipolar molecule carrying both positive and negative charges. It reacts very selectively and highly electrophilic. There is single lone pair of electrons and 18 valence electrons. The bond angle and bond length between the oxygen atoms is 116.8 degrees and 1.278 Å, respectively. The diagram given below depicts the resonance and Lewis structure of ozone. The dipole moment of ozone is 0.53 D and the bond order is 1.5. It functions as an isoelectronic compound. 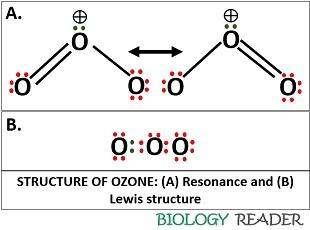 As we discussed earlier that the ozone is generated naturally in the two atmospheric zones, one is the lower stratosphere, and the other is the ground-level troposphere. Other than that, ozone can also be formed artificially by using an ozone generator machine. 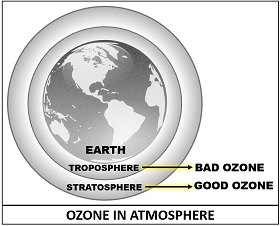 It is formed naturally by the series of reactions between the oxygen molecules and ultraviolet radiation. The concentration of stratospheric ozone is much higher than the tropospheric ozone, and it constitutes about 21% of the atmosphere.

The formation of ozone is higher in the tropical stratosphere, which is estimated between 18 and 36 kilometres above the earth’s surface. Stratospheric ozone undergoes repeated creation and destruction by a process called the Chapman cycle, which involves the following sequential stages: 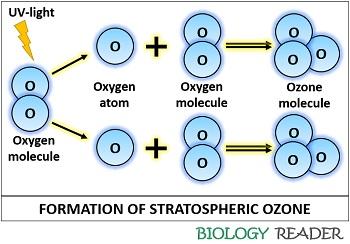 Photolysis of Oxygen: It is the first step that involves a short wavelength (240 and 160 nm) UV-light, which splits molecular oxygen (O2) into two free atomic oxygen molecules (O).

The reaction of Oxygen atoms with an oxygen molecule: It is the second stage resulting in the combination of each highly reactive atomic oxygen with molecular oxygen to generate ozone (O3).

Dissociation of ozone: At last, the ozone again splits off into a highly reactive oxygen atom and one oxygen molecule under the presence of solar UV-radiation. This series of reaction occur continually, i.e. the ozone is continuously generated and dissociated in the stratospheric zone.

The stratospheric ozone is considered to be good ozone, which shields the potent UV-radiations coming to the earth surface. It reacts with a wide variety of natural and human-produced chemicals in the stratosphere.

It is also called ground-level ozone. Tropospheric ozone is formed by the natural gases and the gaseous pollutants present in the atmosphere like hydrocarbons, nitrogen oxide gases, carbon monoxide, and hydroxyl radicals etc. There is a small amount of ozone present naturally at the ground level produced by the soil and certain plants, which is not harmful to human well-being.

The gases released from the vehicles, refineries etc. that contribute to the greenhouse gases accumulate in the tropospheric layer of the atmosphere, which then reacts with the heat or solar UV-light and turns out to be more harmful. Compounds like VOCs, NOx and CO functions as the precursors of tropospheric ozone, which leads to ozone depletion. VOCs or Volatile compounds like gasoline are coming out of the sources like emission through automobiles and many industrial processes.

Apart from natural methods and chemical reactions in the atmosphere, ozone can also be generated artificially via ozone generator. 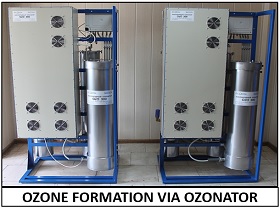