Photosystem I (PS-I) and photosystem II (PS-II) are two multi-subunit complexes that play a pivotal role in the light-dependent reaction of photosynthesis. Chlorophylls are the light-harvesting pigments that constitute the photosystem and pigment system.

A photosystem possesses an antenna complex (200-300 light-harvesting pigment molecules) and a reaction centre. Based on chlorophyll’s different absorption wavelength, two photosystems (PS I and II) generally exist. The auxiliary accessory pigments trap photons and hand them over to the specialized protein pigments of the reaction centre.

Definition of Photosystem I

PS I refers to a photosystem that participates in a light reaction of photosynthesis. In contrast to PS II, PS I carries more chlorophyll-a content compared to chlorophyll b. Furthermore, PS I participates in cyclic phosphorylation and produces NADPH. Photosystem I has a reaction centre that possesses chlorophyll-a molecules. It is capable of absorbing light at a wavelength of 700 nm. 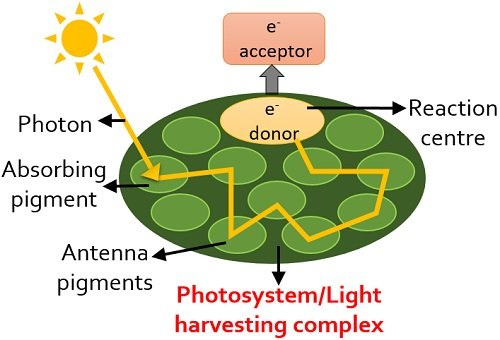 PS II refers to a light-dependent photosystem that participates in the photosynthetic light reactions. Opposite to PS I, it contains more chlorophyll b pigments compared with chlorophyll a. The PS II reaction centre contains chlorophyll-a that has an absorption peak of 680 nm (P680). Furthermore, the pigment molecules of PS II absorb photons and funnel them to the reaction centre or antenna complex.

The PS II reaction centre excites and releases high energy molecules. Consequently, the primary electron acceptor molecules pick high energy electrons and hand them over to the PS I through many carrier molecules. The excitation of electrons through electron carriers of low energy levels releases free energy that the cells harness to synthesize ATP from ADP via photophosphorylation.

Therefore, we can conclude that photosystems I and II play a fundamental role in trapping photons of selective wavelength and channelizing them to the active reaction centre. Plant cells harness the light energy harnessed to generate chemical potential energy like ATP and NADPH that is again used by the plant cells to synthesize glucose during the dark reaction of photosynthesis.