Penicillium is a genus consisting of a group of fungi, which include 354 accepted species. Some Penicillium species are considered doctor fungus as some of the members produce antibiotics, which can inhibit the growth of certain bacteria.

Among the group of Penicillium species, excluding P.marneffei, all are filamentous in structure. This post discusses the classification, structure (including macroscopic and microscopic features, characteristics and some interesting facts about Penicillium.

By focussing on both macroscopic and microscopic features, one can easily examine the morphology of Penicillium.

All the species (except P. marneffi) show the following similar features:

P. marneffi produces flat, radially sulcate colonies. The colour of the colony towards the centre appears bluish-green and white at the periphery after incubation at a temperature of 25 degrees Celsius. Oppositely, it produces cream to slightly pink coloured convoluting mycelial network at 37 degrees Celsius.

The vegetative structure of Penicillium comprises the following elements. 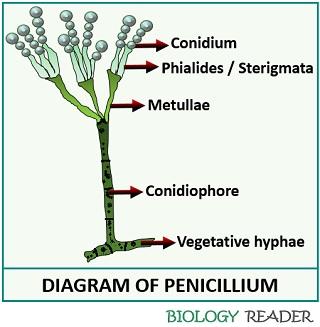 A septum consists of a central pore. The growth of mycelium usually occurs superficially on the substratum or deep inside the substrate. A single cell of mycelium may contain one to many nuclei, i.e. Uni-nucleate or multi-nucleate.

Penicillium species possess a long, filamentous-like conidiophore. The conidiophore may be either symmetrical or asymmetrical in structure and can be simple or branched depending on various species. Metullae or primary sterigmata develop as a secondary branch from the long conidiophore.

Phialides are the secondary sterigmata that resemble the flask-like structures, which pinches out from the secondary branches (metullae). The arrangement of phialides is very typical, which resemble the brush-like clusters, and sometimes known as “Penicilli”.

The members of the genus Penicillium generally comprise conidial chains on the flask-like phialides. Conidia possess a diameter of 2.5-5 µm. The conidial spores or conidiospores exist as round and unicellular cells. The spore cells generally have an arrangement in bicipital succession.

Habitat and Distribution: They are commonly present in the soil, dead organic matter of plant and animal waste, air etc. Penicillium species are generally ubiquitous in distribution and having a heterotrophic or saprophytic mode of nutrition.

Growth Requirements: Penicillium species grow at a mesophilic range of temperature (between 20-30 Degrees Celsius) and a pH of 3 – 4.5. They achieve maximum growth at a temperature of 23 degrees Celsius. The water activity must be in a range of 0.78 – 0.88.

Wonder Drug: Some strains of the genus Penicillium produce various medically useful antibiotics. The first antibiotic was isolated from Penicillium notatum by a scientist named Alexander Flemings in 1929, which he named “Penicillin”.

Penicillin functions as an antibacterial agent that mainly resists the growth of gram-positive bacteria. Later, another antibiotic was introduced as “Griseofulvin” from Penicillium griseofulvum and used as an antifungal agent to inhibit the activity of dimorphic fungi.

Culturing: It can be cultured on Czapek Dox agar and 2% Malt extract agar at a temperature between 23-25 degrees Celsius. Almost all the strains require a sporulation period of a maximum of 7 days. The identification of the specimen involves mounting with a lactophenol cotton blue stain over a glass slide.

Some of the interesting facts are given below:

Penicillium is a term derived from the Latin word Penicillus (means paintbrush), as its structure is very similar to a paintbrush. Penicillin was the first antibiotic introduced by Alexander Fleming, which he isolated from the species (P. notatum).

The growth of Penicillium species is the common cause of fruits and vegetable decay and one of the primary reason for post-harvest losses. It can also affect the economy, as it may grow on fabrics, leather, wood etc.

It can grow on various foodstuffs (commonly fruits and vegetables) and may consequence food spoilage. Some of the P. species produce mycotoxins, which may cause various allergic reactions.
Example: P. verrucosum releases ochratoxin-A mycotoxin, which shows nephrotoxic (kidney damage) and carcinogenic effects (cancer).

Some of the strains are harmful to humankind and the economy of our country. Still, few are also crucial in the industrial field, medicine, food microbiology, bio-deterioration. P. species play an essential role in the commercial production of cheese, organic acids and antibiotics.