Physical mutagenesis is a mutation in the cells, tissues and DNA of the organisms induced by physical mutagenic agents like radiation and heat. Thus, mutagenesis (muta: means changes and genesis: means origin or outset) is a phenomenon defined as the origination of any changes that can alter the gene sequence and structure, thereby causing mutation.

Physical mutagens mainly include sources of electromagnetic radiations like X-rays, α-rays, β-rays, UV-rays etc. and thermal heat, which can cause either direct DNA-damage or indirect DNA damage via highly reactive free radicals.

DNA is a heritable material, which replicates and passes down to the daughter cells. DNA replication accuracy is high, but some consequences may occur that can cause replication errors like mismatch base pairing, crosslinking, dimerization etc.

The mutation is primarily seen during DNA replication and translation due to the incorporation of some physical, chemical and biological mutagenic agents. In this context, we will focus only on the different types of physical mutagens, along with the definition of physical mutagenesis.

Therefore, the sources responsible for the occurrence of physical mutagenesis are termed physical mutagens. Cells use different DNA-repair mechanisms to undo the changes that occurred in the DNA strand like excision repair, photoreactivation repair, mismatch repair and many more. But, the accumulation of mutation can cause cancer.

Physical agents like radiations of the electromagnetic spectrum and heat induce physical mutagenesis, which is characterized by the following changes in the DNA: 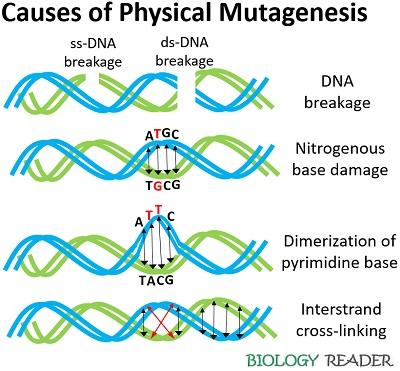 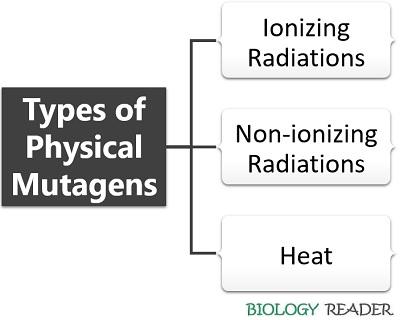 Therefore, we can say that the radiations cause damage at a molecular level, as they affect the DNA biomolecule directly (ionization or excitation) or indirectly through the formation of highly reactive free radicals. 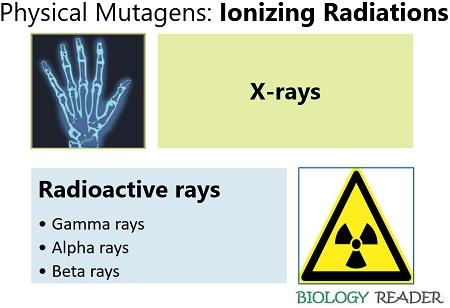 Ionizing radiations mainly affect the rapidly dividing cells (like blood cells in the bone marrow and gastrointestinal tract). High-energy radiations can directly damage the DNA by causing chromosomal breakage (either one or both the strands), chromosomal rearrangement and DNA crosslinking.

However, ionizing radiations indirectly damage the DNA through the free radical effects by following the mechanism given below: 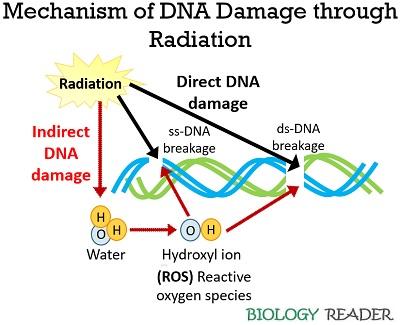 Reactive oxygen species may directly or indirectly affect the nuclear DNA by modifying bases incorporated within the DNA or deactivate the DNA-repair enzymes.

UV-radiation is a common example of non-ionizing radiation, which can induce DNA damage because of the skin cells’ high absorption capacity. Nucleic acid (DNA) readily absorbs UV-light of wavelength 280 nm. Thus, DNA acts as a target molecule of the UV-rays.

UV-radiation naturally originates from the sunlight and artificially through tanning beds. It has a high wavelength and low energy or penetration. Non-ionizing radiations result in DNA excitation due to photon (UVA and UVB) absorption by the cells.

As a result, crosslinking, base damage, dimer formation etc. may consequence. Dimerization in the pyrimidine bases is most evident than the purine bases. The steps involved in the dimerization of bases are as follows: 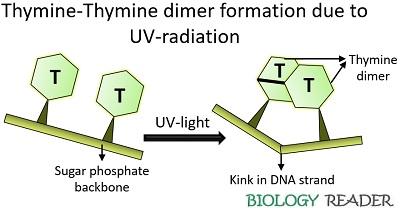 UVA, UVB and UVC are the ultraviolet rays coming out of the sun. The earth’s ozone layer mostly absorbs UVC-rays. Only UVA and UVB rays reach the earth’s troposphere and cause diversified effects. 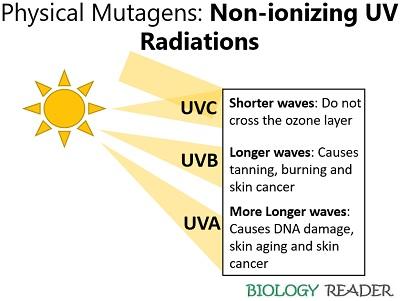 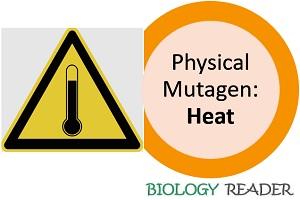 Heat stress, heat shock or hyperthermia are the terms used for the term heat, which can cause lethal effects on the DNA integrity and termed as heat-stress induced DNA damage. Heat stress causes single-strand breaks that result in the cessation of the DNA replication. Besides this, heat stress also causes double-strand breaks and inhibits the DNA –repair system.

Therefore, we can conclude that physical mutagenesis is an outcome of the damaged caused to the cells, tissues and DNA through the sources like radiation and heat stress. There are different DNA-repair mechanisms, which can correct DNA-damage induced due to physical mutagens.