Exocytosis is a means of membrane transportation that expels the intracellular material out of the cell. The transport of the substance is mediated by the vesicles that eliminate the cell debris and release specific proteins, enzymes, hormones etc., outside the cell.

It is a type of active transport mechanism that makes the use of ATP. Examples of exocytosis include the release of enzymes into the blood, neurotransmitters into the synapse, and plasma membrane proteins out of the cell.

In this post, we will discuss the definition, constitutive, regulatory and lysosome mediated pathways. Besides that, the characteristics, steps, example and the process of vesicle formation have been explained.

Exocytosis refers to the cellular mechanism, where the transport vesicles incorporate with the cell membrane and eliminate the materials out of the cell via constitutive, regulatory and lysosome mediated secretory pathways. Thus, exocytosis merely refers to the process, which expels the biomolecules and metabolic waste from the cell to the extracellular space.

Generally, exocytosis is mediated by the given three pathways: 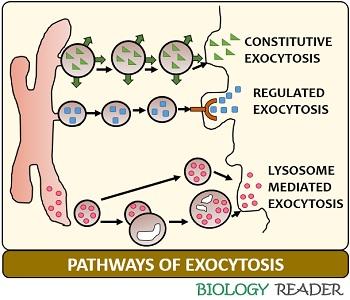 This kind of mechanism can be carried out by all cells. It is operated continuously to deliver the newly generated lipids, proteins etc., from the Golgi complex to the bilayer cell membrane.

The specialized cells carry out this pathway by secreting specific hormones, proteins, enzymes, neurotransmitters etc., from the cytosol to the extracellular space.

This pathway involves the incorporation of the lysosomes with the bilayer cell membrane. Lysosome mediated secretory pathway functions to exclude the undigested cellular debris out of the cell.

A lysosome appears as a small vesicle, which contains an acid hydrolase enzyme. The hydrolytic enzymes function to break down the waste materials and microbes. They carry the cellular debris to the bilayer cell membrane and fuse to expel the contents out to the extracellular matrix. 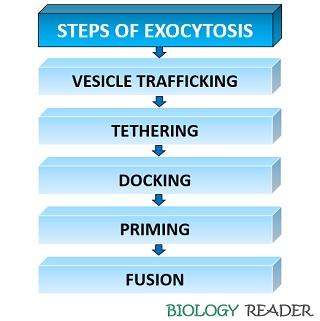 Exocytosis in Pancreas: When the blood sugar level becomes low, the islet alpha cells of the pancreas release glucagon hormone via exocytosis. Then, the glucagon hormone activates the hepatic cells of the liver, which facilitate the transformation of stored glycogen into glucose. Then, the glucose released by the liver cells finally goes into the bloodstream until it reaches a normal range. 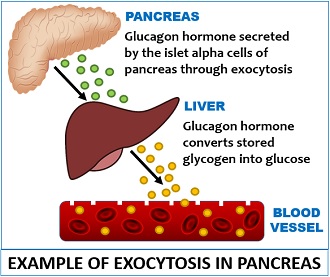 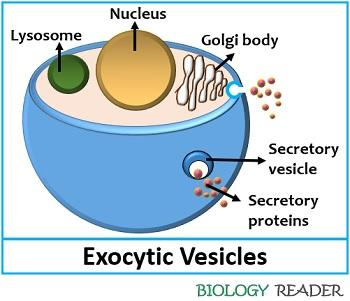 The calcium-dependent cycle serves as a regulated secretory pathway, which requires specialized cells to release the vesicular contents. In contrast to this, the cells carrying out a constitutive pathway are calcium-independent.