Definition: Any undesirable change or deterioration in the quality of milk is called Spoilage of milk. These changes can be like an unpleasant appearance, colour, odour, taste etc. Milk contains a complex biochemical composition and a high water activity, due to which it provides an excellent culture medium for the growth and multiplication of microorganisms that lead to cause serious health issues. Spoilage of milk can be due to the primary and some secondary factors.

A primary factor includes microbes or enzymes, which deteriorates the milk quality by degrading the constituents like protein, fat and carbohydrates present in the milk. A secondary factor includes the addition of unwanted chemical or toxin that makes the milk unsuitable for consumption. Besides, it also includes such conditions that are naturally present in the food like moisture, oxygen content, which leads to support the microbial growth.

Majority of the psychrotrophic microorganisms cause milk spoilage through the enzymatic degradation of protein and fat content by their proteases and lipases activity. It is important to perform a microbial examination to detect the presence of any harmful microorganisms. the quality of milk should be maintained, as it is used for the production of various other dairy products.

Here in this content, we will mainly focus on the sources, factors affecting the milk spoilage as well as the microorganisms involved in the spoilage process and their microbial analysis by different approaches.

There are two factors involved in the spoilage of milk, namely internal and external factors as given in the diagram below. 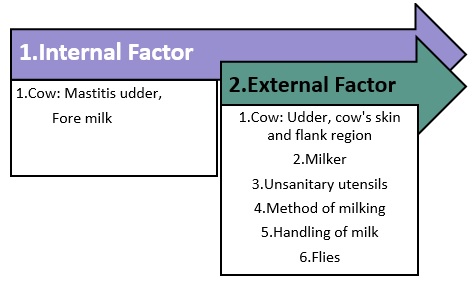 Factors Affecting the Spoilage of Milk

It can be categorised into: 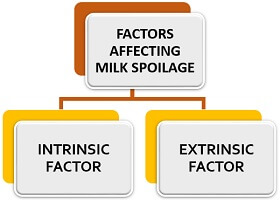 Types of Microorganisms involved in Spoilage of Milk

The microorganisms that are participating in the process of milk spoilage can be categorized into the three major groups, which are explained below. 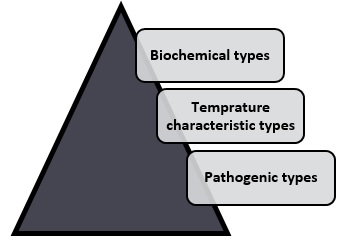 Gas production: It includes the microorganisms, which can produce acid and gas mainly coliforms. Gas production is characterized by the stormy fermentation of milk, which evidences at the top of the milk.
Examples: Clostridium sp., Bacillus sp., coliform
Signs of spoilage: Explosion of curd.

Ropiness: It includes the microorganisms that can make the milk highly viscous and sticky. It is characterized by the appearance of silk-like threads in the milk, caused due to the slimy capsular material of an organism. Surface ropiness and ropiness throughout the milk are the two common types.
Examples: Alcaligenes sp., Klebsiella sp., Enterobacter sp. Etc.

Dairy mould: It is characterized by the growth of moulds in milk, which can produce toxins to cause serious health issues.
Examples: Penicillium sp., Geotrichum sp. Etc.
Signs of spoilage: Mouldy appearance

Based on temperature, the microorganisms can be classified into the following four types:

Thermophilic bacteria: It is also called heat-loving bacteria, which grows at a temperature between 55-65 ֯C.
Examples: Bacillus sp.
Changes in milk: Off flavour and odour.

Besides, there is one more type that is Thermoduric bacteria, which indirectly contaminate the food by contaminating the container. It can result from faulty cleaning and improper handling and these can survive at pasteurisation temperature but cannot grow.
Examples: Micrococcus luteus, Bacillus subtilis etc.

Some pathogenic forms of microorganisms are found in milk, which can cause serious illness. Diseases can be transmitted either through raw milk, cow and others.
Examples: Tuberculosis is caused by Mycobacterium tuberculosis in both cow and man. Bacillus anthracis causes anthrax in both cow and man. Streptococcus pyogenes causes scarlet fever in man.

It can be done by the following methods:

It is also called “Viable Count Method“, which examines the viable count of bacteria present in the milk. It gives a rough and direct assessment of a viable number of bacteria and a very simple method to carry out.

Procedure: Take 1ml of milk sample. Then, prepare serial dilutions by transferring 1ml of a sample from each tube, i.e. 10, 100 etc. After that, transfer solid agar media into the sterile plates. Spread 0.5 ml of a milk sample over the solidified agar media. At last, incubate the prepared plates for 24-48 hours at 35-37 ֯C and finally count the number of colonies.

Interpretation of result: More than 300 colonies indicates the milk is unpotable. 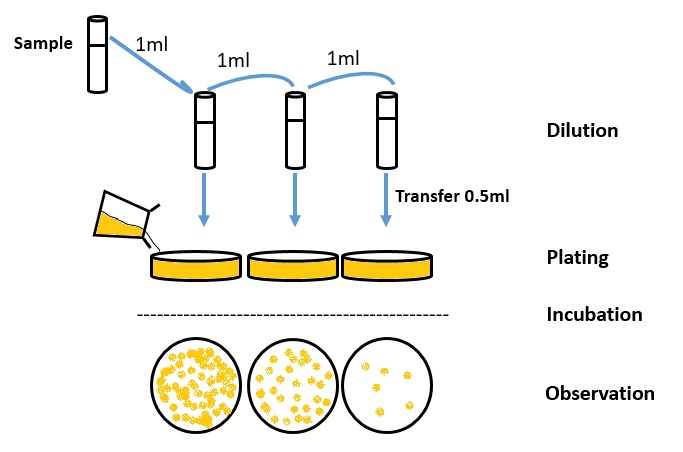 Procedure: Firstly, take MacConkey fluid medium. Then, add milk of different concentrations in a fermentation tube. After that, dip a Durham tube and incubate the tubes for 24-48 hours at 35-37 ֯ C. In this test results are made, based on the fermentation property of coliforms. 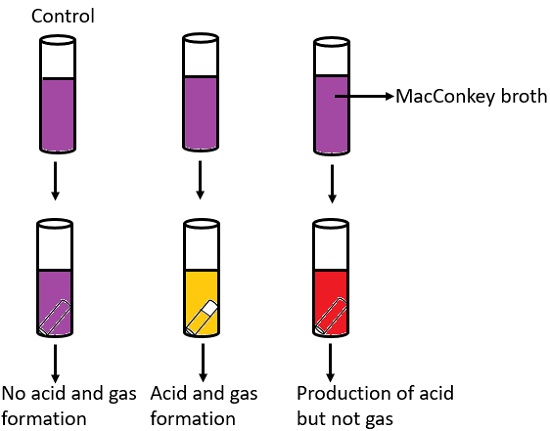 It is a rapid method to determine the microbial load. Using this test, we can identify the quality of milk depending upon the colour-retaining property. The speed of reduction of methylene blue colour is directly proportional to the volume of bacteria present in the milk sample.
In simple words, an increase in the number of bacterial flora will reduce the colour of methylene blue more rapidly due to the consumption of oxygen.

Procedure: Add a definite quantity of methylene blue to 10 ml of milk. After that, hold the sample at 37 ֯C until the colour disappears.

Interpretation of result:
Decolouration time —— Result
30min-2hrs —— poor quality
2-6hrs —— Fair quality
6-8hrs —— Good quality
Over 8 hours —— Best quality
Shorter the decolouration time, higher is the volume of the bacterial flora present in the milk and poor is the quality of milk and vice versa. 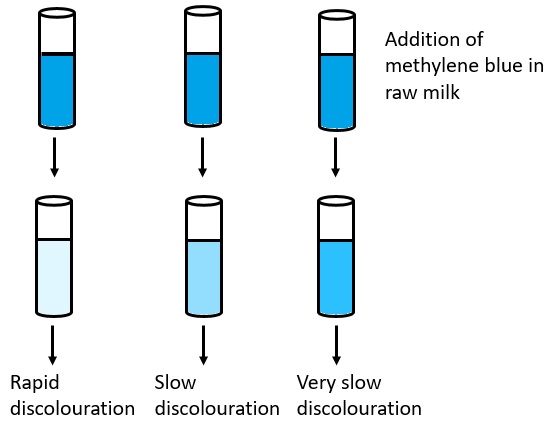 It is very similar to the methylene blue reductase test

Procedure: Firstly add resazurin to the milk sample. Then, incubate the tubes for 10 minutes and observe the shades of colour.

Interpretation of result:
Positive: Formation of pink colour indicates the presence of bacteria that reduce resazurin.
Negative: Colour remains unchanged, i.e. bacteria are not present in the milk, which indicates that milk is of good quality. 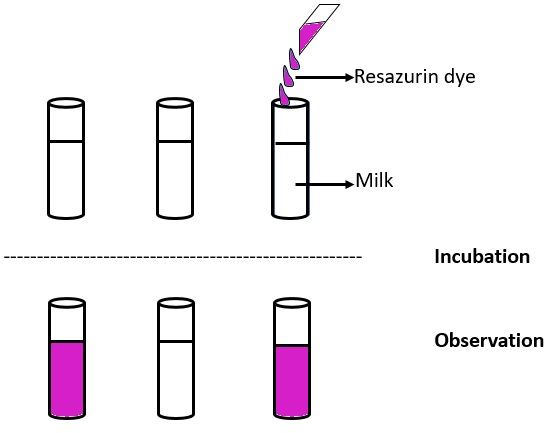 It is used to check the pasteurisation process, to verify whether milk is pasteurised, or not. Phosphatase is an enzyme that is usually present in the milk. This enzyme becomes inactivated if pasteurisation is performed properly.

Procedure: Firstly, take 5 ml of milk in a sterile test tube. Then, add a few drops of sodium biphenyl phosphate. After that, incubate the tubes for 10-15 minutes.

It checks the sterilisation process of milk, whether the milk is boiled correctly or not, to the temperature prescribed for sterilisation. In sterilized milk, all the coagulable heat proteins get precipitated.

Procedure: Firstly, take 5 ml of sterilised milk. Then, add a few drops of ammonium sulphate and boil it in a water bath for 5 minutes.

It is a rapid method for the microbial examination to determine the cell type and morphology.

Procedure: Firstly, take 0.01 ml of raw milk in glass slide (hemocytometer) and air dry. Then, add one drop of methylene blue. At last, count the bacterial clumps in a colony counter.

It counts both viable and non-viable cells.

3 thoughts on “Spoilage of Milk”