The first polymerase activity was seen in E.coli, which was observed by Arthur Kornberg in 1958 and he named it as E.coli DNA-pol I. Later, three types of DNA polymerases were introduced and designated as DNA-pol I, DNA-pol II and DNA-pol III. On further discovery, it was found that the DNA polymerase not only have the polymerization activity but also the exonuclease activity.

A DNA polymerase enzyme performs a central role in the DNA duplication process, in which it creates a strand complementary to the template strand in a 5′-3′ direction. Besides, a DNA pol is also involved in the proofreading and editing mechanism of DNA through its exonuclease activity.

In prokaryotes, out of three DNA polymerases, the only one (DNA pol-III) participates in the process of replication and the other two (DNA poly-I and II) perform DNA proofreading and repair. Here, we will discuss all the properties, structure, and activities of all the three polymerases in prokaryotes.

DNA-polymerase is also called DNA replicate, which forms replicas of DNA relative to the template strand by adding nucleotides to the growing chain. Polymerase enzyme always moves along with the parental strand (template strand) in 3’-5’ direction but forms daughter strand (complementary strand) in 5’-3’ direction. From the name polymerase, we could remember its function that is polymerization or elongation of DNA.

In prokaryotes, there are generally five types of DNA polymerases, out of which three are the most important (DNA pol-I, II and III). DNA pol-I is a key enzyme, which participates in DNA duplication, proofreading, editing, repair and removal of RNA primers. DNA poly-II is solely involved in DNA repair and DNA pol-III is solely involved in the polymerization process. Type IV and V also participates in the DNA repair mechanism but only when the types-I, II and III lose their proofreading efficiency.

In prokaryotes, DNA pol-I, II and III are the three important types that we will discuss below. 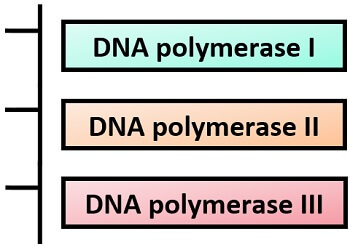 It is the first polymerase enzyme, which was discovered by Arthur Kornberg in 1958. It consists of a single polypeptide chain. Initially, it was believed that DNA pol-I is a replication enzyme. On further study, it was evidenced that it is more a DNA repair enzyme rather than a replication enzyme. In pol-I, there is one atom of zinc present per chain, due to which it is also known as “Metalloenzymes”.

Activities of DNA pol-I: It shows both polymerases as well as exonuclease activity. 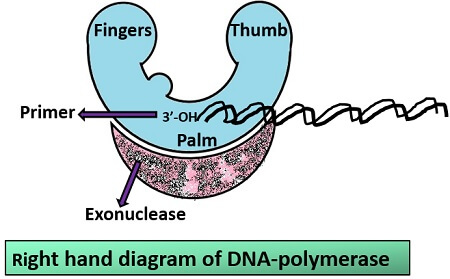 Thomas Kornberg discovered it in 1970. Its efficiency of polymerization is slower than the pol-I. It also consists of a single polypeptide chain. Pol-II acts as backup enzyme or alternative to the process of replication, as in the absence of pol-I it can elongate the Okazaki fragments.

Structure: The structure of pol-II is quite unknown.

It is the primary holoenzyme that mainly participates in the process of replication. It consists of two polypeptide chains. Pol-III contains subunit of many enzymes that perform different functions, and also called as “heteromultimeric enzyme”. Pol-III contains 10 subunits in its structure that make pol-III a complete enzyme, i.e. “holoenzyme”.

Structure: The structure of pol-III consists of 10 subunits, such as: 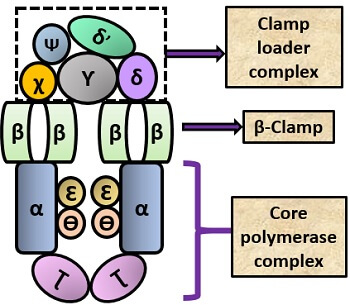 Comparison Chart Between the Functions of Prokaryotic DNA Polymerases

These all properties make it useful in molecular technologies like PCR, DNA sequencing etc.