The shoot system of the plant is an outgrowth that originates from the plumule of the seed’s embryo above the ground. The term shoot is generally interchangeable with the term stem, as it constitutes the major part of the shoot system.

The morphology and physiology of the shoot system are more complex than the root system of the plant. The main stem is the vertical axis that comprises two segments, namely nodes and internodes.

A shoot refers to the plant’s main stem or the complex network of various structures like branches, leaves, buds, flowers, and fruits attached to the main stem. A shoot or a shoot system always grow upwards to the ground and performs multiple functions like photosynthesis, storage, reproduction, transport, hormone production etc.

A shoot or seedling originates from the plumule of the seed’s embryo and shares the following morphological features: 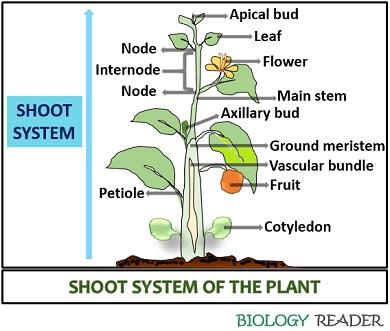 It functions as a skeleton by constituting a major part of the shoot system and firmly supports the other components like leaves, buds, flowers and fruits. The main stem originates through the direct prolongation of the embryo’s tigellum and gives rise to the lateral stems, leafy appendages, buds etc.

These are the flattened structures that hit the node of the main stem and the region in the middle of two nodes or internode. The angle forming between the leaf at the node section and the vertical stem commonly refers to the “Leaf axil”.

Leaves have a basipetal or acropetal pattern. They emerge out via differentiation of the shoot apical meristem. A leaf mainly comprises of three elements, namely: 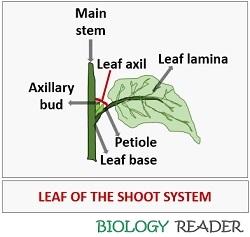 It commonly refers to a lateral bud or lateral meristem attached to the leaf axil. An axillary bud has two types: 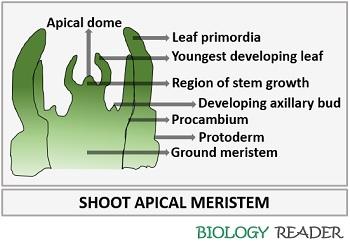 It constitutes the reproductive part of the shoot system and belongs to the members of angiosperms that are meant to reproduce sexually. A flower involves four characteristic whorls, namely:

Based on the function of floral parts, a flower is classified into the following two types:

It is the reproductive structure that indicates the maturity or the age of the plant. “Parthenocarpic fruits” lack seed or reproductive parts and produce fruits asexually. An ovary or ovule differentiates into pericarp and seed, respectively, after complete fertilization. When a pericarp is thick, it differentiates into three distinct layers, namely outer epicarp, middle mesocarp and inner endocarp.

They are the seed leaves or true leaves that germinate after the fertilization of the ovule from the plumule of the mature embryo.

A shoot system of the plant body performs specific functions like: 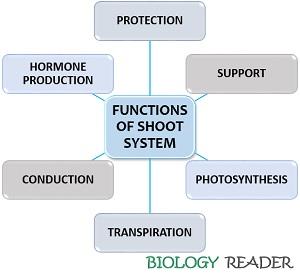 Protection: In some plants, a stem comprises hairy or spiny structures on its surface that harbour a plant from predators. Some plants like bracken produce toxic materials that also keep away the grazing animals.

Support: The ground tissues like sclerenchyma and collenchyma also provide strength and rigidity to the stem. Thus, the stems withstand straight and embrace various components of the shoot system like leaves, lateral branches, buds, flowers etc.

Transpiration: Both leaves and stems undergo transpiration via stomata and lenticels, which allow gaseous exchange between the plants and the surrounding.

Conduction: A main stem of the shoot system participates in preparing food by the leaves to the other parts via phloem vessels. Besides, the root system facilitates the absorption of water and minerals to the other components via xylem vessels.

Hormone production: A shoot tip produces auxin (a growth regulatory hormone) that stimulates the vertical growth or height of the plant and restricts the growth of axillary bud.

A cytokinin is also a growth-regulating hormone that conquers the inhibitory effect of auxin by stimulating side branching or the growth of axillary bud. The cytokinins increase the diameter or thickness of the plant and give a bushy appearance.

Therefore, both the growth-regulating hormones can manipulate the plant’s growth pattern and can be used widely in the field of agricultural science.

A shoot develops after embryogenesis, where a zygote inside an ovule goes through successive mitotic division to form a mature embryo. A mature embryo comprises five distinct regions that you could see in the diagram below: 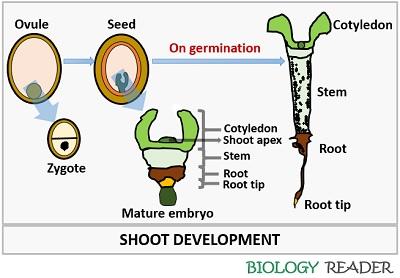 A top green part will produce seed leaves or cotyledons, in between which a shoot apical meristem is present. The shoot apex or the terminal bud will stimulate elongation of the plant. The region below the apical meristem will encourage the growth of the main stem. The below two layers will give rise to the root system of the plant.

2 thoughts on “Shoot System of Plant”