The root system remains subterranean or underground the soil in the case of vascular plants. Therefore, it provides strength and rigidity to the growing shoot system against adverse conditions.

Some of the trees (like a banyan tree, bonsai tree etc.) have their root system over the ground that refers to aerial roots. Unlike stems, roots are irregularly branched structures that lack nodes and internodes.

The root system consists of a thimble-like root cap and thread-like root hairs. In this context, we will learn the definition, types, characteristics, parts and functions of the root system in plants.

The root system refers to the ramose structures that exist subterranean or superterranean to the earth surface. A root consists of the hard root cap, primary root meristem and root hairs. The growth of the root system depends upon the soil composition, soil type, type of plant species and growth conditions. Roots are complex structures whose total dry weight may exceed the total weight of the plant body. A seed first develops a radicle or primary root and later forms secondary, tertiary etc., roots.

Roots are of the following types: 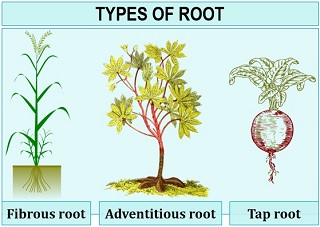 A structure of root generally comprises of three parts: 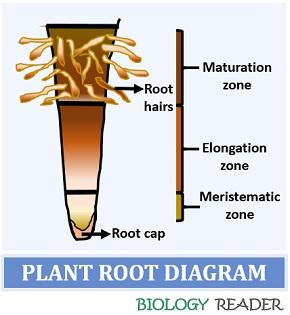 Root cap: It is found at the tip of the root system and has a thimble-like appearance. Root-cap is a multicellular structure present proximal to the primary meristem. It also secretes mucilage that acts as a lubricating agent. A mucilage secreted by the root cap protects the root system against dryness. Few aquatic plants like Pistia, Ecchornia etc., have a root pocket instead of a root cap.

Root meristem: It is found 1 mm above the root cap and refers to the “Zone of meristematic activity”. This region contains cells of small size, thin-walled and dense protoplasm. Here, the cells undergo repeated cell divisions. The “Zone of elongation” refers to the region where some cells enlarge rapidly, located proximal to the meristematic zone. The cells in the elongation zone extend the root length.

Root hairs: The cells in the zone of elongation undergo multiplication and differentiation to develop mature cells. The mature cells proximal to the area of elongation constitute a region of maturation. The epidermal cells of the maturation zone give rise to the fine, thread-like root hairs. Root hairs perform a functional role in water and mineral absorption from the soil.

Anchorage and Physical support: A root system anchors the plant body or the shoot system to the soil. Roots under the ground help in maintaining the plant’s posture by giving physical support. Taproots provide better attachment of the plant to the soil and make a plant resistant to toppling during storms.

Absorption and Conduction: Roots promote absorption of water and conduction of dissolved minerals and nutrients in the soil to the plant body. Root hairs are fine structures existing in close vicinity to the ground and absorb nutrients from the soil.

The root hairs uptake the nutrients and conduct them to the shoot system via xylem through capillary action. Therefore, the root system provides nourishment to the plant for growth or development. In addition, fibrous roots are more efficient in absorbing nutrients deep inside the soil.

Food Storage: The root system also acts as a storage organ of the plant, which mainly stores water and carbohydrates. The plant prepares its food during photosynthesis and stores in the specialized part of the plant like leaf, stem and roots. Taproots are more effective in food absorption than fibrous roots.

Role in Photosynthesis: Roots play an essential role in the process of photosynthesis. A plant gets water from the root system and releases excessive water through stomata through transpiration. As the water vapours release out of the stomata, CO2 enters the plant cell necessary for photosynthesis.

Ecological functions: Roots are part of soil ecology, promoting soil aggregation and protecting a plant from being carried away by wind or water.