Trickling filter process is one of the types of aerobic wastewater treatment. It is a fixed-bed bioreactor that is the part of secondary wastewater treatment, which eliminates the coarse particles, suspended organic and inorganic waste, small colloids etc. out of the primary effluent. A trickling filter is also called biological filter, as it makes the use of active microbial mass as a bioweapon to degrade the waste out of primary sewage.

Trickling filter process can define as the biological system, which tends to separate or degrade the maximum organic and inorganic waste (up to 85%) out of the primary or raw sludge via the slime layer. The designing of a trickling filter unit includes a support structure, pebble or plastic filled media and rotary distributor.

It works under the aerobic conditions and makes the use of aerobic microbes so that they can exploit or oxidize the organic matter into a simpler form. The filter bed is placed below the pebble filled media, which aids the separation of secondary effluent out of waste activated sludge. The final effluent is released from the outlet pipe and further treated with disinfectants like chlorine, UV, ozone etc. to make it safe for disposal.

The trickling filter process goes through a series of operation, which involves the following stages: 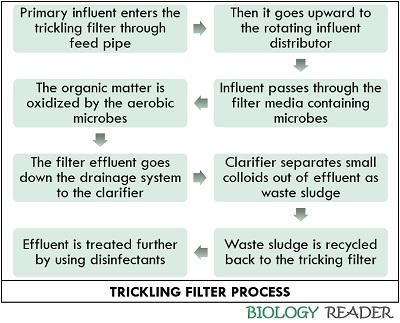 Introduction of the settled sewage

The primary sewage flushes downward via a perforated rotary distributor, which evenly distribute the sewage over the filter matrix. The filter bed is packed with constituents like rock, gravel, redwood, synthetic material etc. that acts as a media for the attachment of the microorganisms. Therefore, the trickling filter is the best example of an attached growth system, in which biomass is directly associated with the media instead of sewage suspension.

Passage through the filter media

The filter media is chiefly composed of porous media that increases the surface area for the decomposition of the organic matter by the microorganisms. Trickling filters are generally available as the standard rate and high rate filter, in which both have different hydraulic and organic loading rate. It is also provided with air vents and backwashing to avoid odour, fly breeding and to clog problems.

Oxygen utilization by the microorganisms

The treated primary sewage splashes through the arm of a rotary distributor provide the oxygen supply in the form of dissolved oxygen. Oxygen is drawn into the filter media via vacuum or chimney effect. The bio-film layer uses the dissolved oxygen trapped within the filter media and oxidize the organic compounds by releasing carbon dioxide gas, water and other oxidized end products. 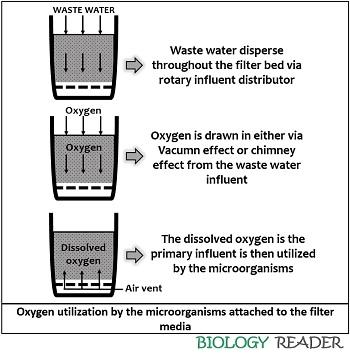 It also refers as a slime layer, which contains aerobic biomass of the surface of the filter bed up to the thickness of 0.1-0.2mm. In contrast, the remaining area contains anaerobic biomass. The above surface containing aerobic microbes is considered as the rapid growth phase region, as the microorganisms harness direct sunlight and maximum amount of oxygen to degrade the organic waste.

In contrast, the lower surface containing anaerobic microorganisms is considered as the oxygen-deficient region, in which the microbes enter the endogenous phase to utilize their own cell for the growth. After a certain point, the biofilm layer thickens gradually by the organic matter decomposition, and later it sloughs off into the liquid flow and further separated inside the clarifier or sedimentation tank out of effluent.

Trickling filter functions as a bioreactor in the secondary wastewater treatment, and its layout includes the following: 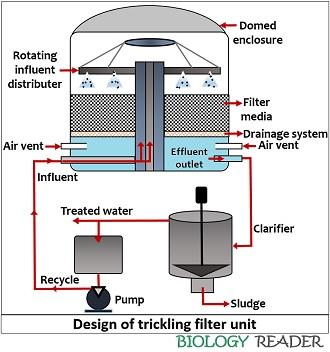 Filter bed: It is a bed chiefly containing crushed rock or other coarse media. The construction of a filter bed is roughly 6 feet deep and 200 feet in thickness. Settled sewage is flushed evenly over the filter bed containing organic and inorganic waste via continuously rotating distributor’s arm. Holes within the rotary distributor arm facilitates the trickling of primary influent and settled sewage throughout the filter bed.

Drainage system: The treated wastewater from the trickling filter bed goes down the drainage system and further undergoes tertiary treatment via membrane filter and disinfection before secondary sedimentation. A secondary clarifier is a sedimentation unit, which separates the small colloids, suspended particles etc. at the bottom out of waste fluid.

Besides, the tertiary treatment is also necessary for the safe disposal of the effluent, as this step eliminates the pathogenic microorganisms. In contrast, the oxidized or decomposed organic matter sloughed down and recycled back in the trickling filter mediated via return pump. 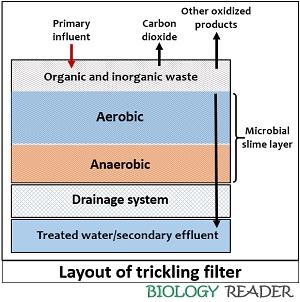 Depending upon the hydraulic and organic shock load, trickling filters can be categorized into two types, namely high rate and low rate trickling filter. The hydraulic loading rate can define as the sewage flow (Q) per unit volume (V) of filter bed in a day, while the organic loading rate can define as the kilograms of BOD (Y5) introduced into the per unit volume (V) in a day.

To identify the characteristic difference between the two, one can look upon the table given below that specifies the efficiency and depth of the low and high rate trickling filter.

Therefore, we can conclude that the trickling filter process is one of the attached growth system, which means that the microorganisms responsible for the degradation of the organic matter are attached to the non-submerged packing material. It is designed for the secondary treatment of the primary influent to eliminate the suspended and soluble organic waste along with the nutrients.