As we know the enzyme is “Highly specific” molecule, its specificity is due to the active site that allows the binding of a particular substrate. The amino acid residues are present around the active site, which holds the substrate molecule in the right position during biochemical reactions.

The substrate molecule shows a high binding affinity towards the active site. In this context, we will discuss the definition, reaction mechanism, characteristics, properties and role of the enzyme’s active site.

The enzyme’s active site is the small region, which seems like a cleft or cavity composed of nearly 10-15 amino acid residues. According to the term, we can define it as a site that activates the complex enzyme to bind with the particular substrate, induces the substrate’s transition state and stabilize the product formation. Thus, the active site merely refers to as the catalytic site. The active site performs two functional activities.

Reaction Mechanism of an Enzyme 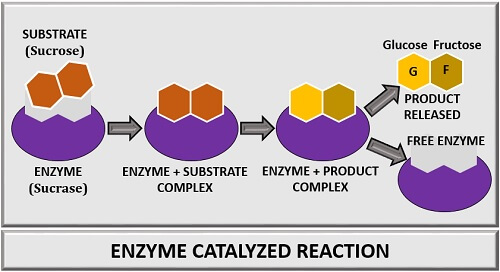 Let us take an example, where sucrose is a substrate combining with the active site of an enzyme “Sucrase”. After, the binding of sucrose with an enzyme sucrase, an E-S complex forms. Then, a reaction between sucrase and sucrose takes place. The reaction will change the sucrose’s structural conformation called “Transition state of the Sucrose”. The change in sucrose’s structural configuration leads to the conversion of the E-S complex into the E-P complex. At last, glucose and fructose are released as products form the sucrase enzyme. 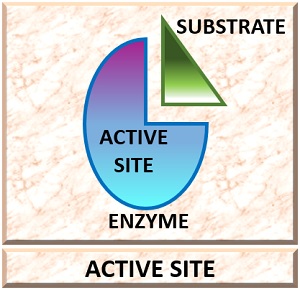 Following are the important characteristics of an active site that includes: 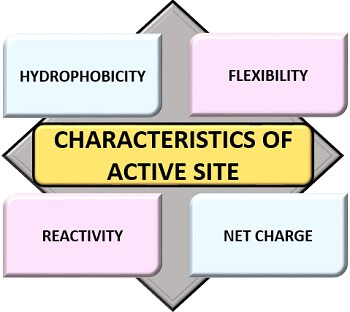 An active site shows flexibility as it can change its conformation to mediate substrates’ conversion into products.

The active site of an enzyme reacts with the specific substrate. Its reactivity depends on the environmental conditions like temperature, pH, enzyme and substrate concentration, etc. The enzyme’s active site combines with the substrate and thereby reduces the activation energy to further catalyze the reaction.

The active site mainly consists of non-polar amino acid residues, which carry no charge or zero net charge. Some active site also consists of polar amino acids, which carry both positive and negative charge. The net charge of the catalytic site decides which amino acid will bind with the enzyme. There must be a complementary pairing between the active site and the substrate. The same charge on both the catalytic site and substrate will not form an E-S complex as repulsion may result between the two.

As we have discussed the active site performs two major activities like:

Let us assume two conditions; one is the conversion of substrate into a product without enzyme and second in an enzyme’s presence. 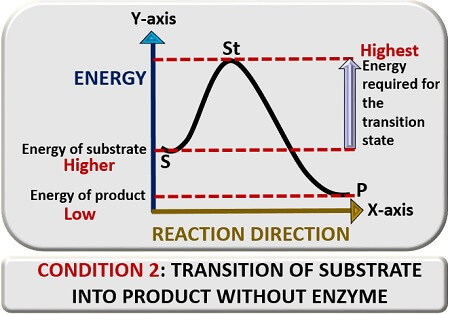 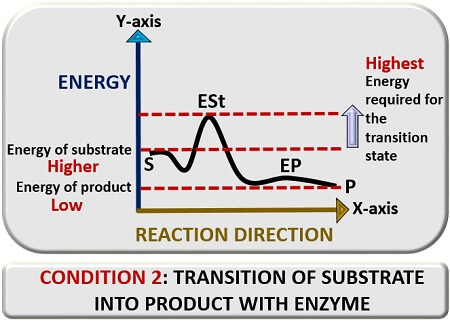