Clostridium botulinum is a clinically significant bacteria, which causes a sporadic but severe disease called “Botulism”. It produces a particular type of exotoxin that affects the nervous system by inhibiting the neuromuscular junction’s activity. Therefore, the botulinum toxin behaves as a neurotoxin, which blocks the release of a neurotransmitter (acetylcholine).

Clostridium botulinum belongs to the group of pathogenic bacteria, which produces a highly potent exotoxin that causes botulism disease. They exist as anaerobic, gram-positive, rod-shaped and spore-forming bacteria. Clostridium botulinum is widely distributed in the world. The spores of C.botulinum are ubiquitous but most commonly found in soil and marine sediments. C.botulinum spores can enter the body in two ways:

Once a bacterium enters the body, it first causes gastrointestinal symptoms after 24-36 hours of ingestion. A bacterium goes through the maturation phase and produces an exotoxin that causes cranial nerve dysfunction within 3-7 days. 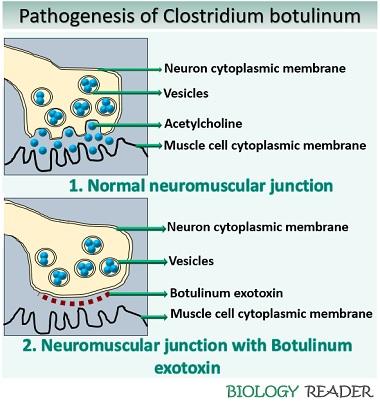 Further, C. botulinum obstructs muscle contraction by inhibiting acetylcholine synthesis and resulting in the paralysis of involuntary muscles. An exotoxin causes “Flaccid paralysis” by blocking the motor nerve terminal to synthesize acetylcholine at the neuromuscular junction. The progression of the disease is in a downward fashion, which means it would initially affect the eyes, face, throat, chest and other lower extremities.

Spores of C. botulinum are worldwide in distribution and are saprophytes. The strains of C. botulinum have a wide range of habitat, and they are commonly present in the soil, the skin of fruits and vegetables, hay, silage, animal manure, sea mud etc.

The origin of C. botulinum was evolved after a major outbreak occurred in the year 1735, after eating German sausages. After C. botulinum origination, many scientists studied its phenotypes, serotypes, pathogenicity, and applications etc.

The morphological characteristics of C. botulinum include: 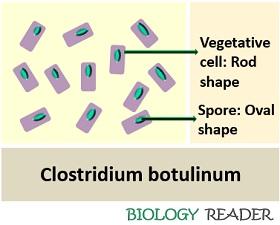 Based on serological specificity, C. botulinum produces the following serotypes:

The spores of C. botulinum can resist extreme conditions, and their growth requires the following environmental conditions:

Thus, the effect of botulinum exotoxin can be detoxified by subjecting it to high heat (100 degrees Celsius for 10 min), high acidity, high sugar and high oxygen environment.

The different groups of Clostridium botulinum synthesize exotoxins that serve as non-toxic protoxins or progenitor toxins. Trypsin activates the exotoxins and the other proteolytic enzymes. In the pure crystalline state, botulinum exotoxin is considerably the most potent or fatal substance known to humankind.

The exotoxin has a molecular weight of 150 kDa. Generally, botulinum exotoxin is a neurotoxin that disrupts the nervous system’s normal functioning and results in paralysis of involuntary muscles. A lethal dose for mice is 0.000,000,033 mg and 1-2 µg for human. 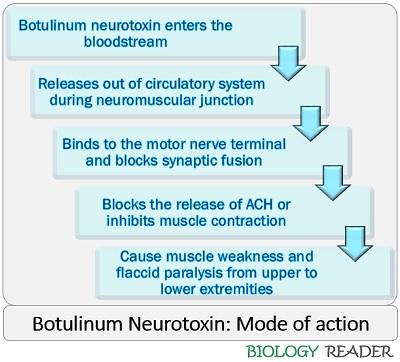 Some interesting facts of Clostridium botulinum are:

Clostridium botulinum is a medically important bacteria, which causes severe disease ‘Botulism’. It is used to prepare or produce medicaments like botox, Dysport etc., to relieve muscle pain. Botulinum exotoxin can be used as a bioweapon for biowarfare and bioterrorism and in the cosmetic industry to remove the glabellar lines.