HIV stands for Human Immuno Deficiency Virus. It belongs to the group of Retrovirus, which consist of positive single-stranded RNA. HIV was first isolated from the patient’s lymph node by Montagnier and Barre Sinoussi who won Nobel prize in the year 2008. The symmetry of HIV is icosahedral. Human Immuno Deficiency virus is enveloped and diploid.

Human Immuno Deficiency virus damages the immune system by successive damage to the CD4 cells. HIV is a lentivirus which means “Slow virus” which takes time to make someone sick, and it infects the cell in three stages, namely acute stage, chronic latency stage and AIDs. There is a long interval between the primary infection and onset of AIDs. In this context, we will discuss the meaning, structure, genome organization and the life cycle of HIV.

Human Immunodeficiency virus is defined as a foreign body, which weakens the immune system by damaging the CD4 cells (a type of effector T-cells) that protects the body against the antigens and can induce various types of infections and diseases. The initial stage of HIV cause acute infection, later it causes chronic infection and eventually leads to AIDs. HIV is thought to be evolved from the chimpanzees in Central Africa infected with simian immunodeficiency virus (SIV). 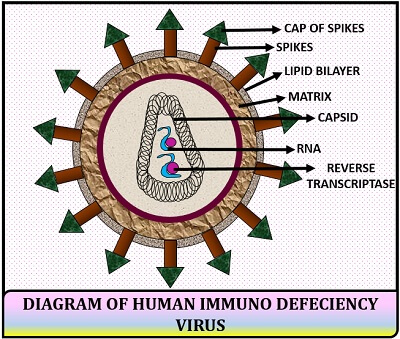 The genome size of HIV is 9.8 Kb. There are three structural and six regulatory genes found in the genome of HIV.

The primary function of HIV is to perform the structural synthesis of new viruses. There are three structural genes, namely Gag, Env and Pol.

The pathogenicity of HIV includes the following steps: 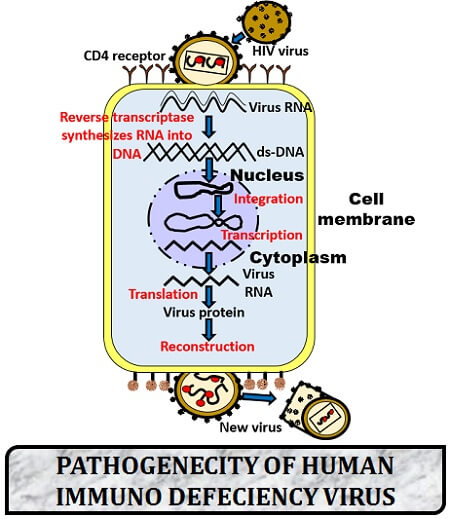 Attachment: After the recognition of specific binding sites, the gp-120 binds with the CD4 receptors. It promotes further binding with the co-receptor.

Fusion: The gp-41 then folds back on itself and draws the virus towards the cell and results in the fusion of two membranes, i.e. virus envelope and cell membrane of the CD4 cell.

Replication: After that, the polymerase active site completes the ss-DNA by the polymerization activity and forms a complementary strand of DNA to form a ds-DNA helix.

Transcription: A cell then contains a viral DNA, which further undergoes transcription to form m-RNA. This m-RNA then moves from nucleus to the cytoplasm of the cell.

Translation: The m-RNA translates to synthesize the building blocks or viral proteins for the new virus.

Processing: It involves the processing of viral proteins by the protease, which cleaves the longer proteins to the smaller core proteins.

Reconstruction: At this stage, the RNA strands, reverse transcriptase, integrase and protease enzymes come together, and the core protein surrounds the capsid.

Budding: The mature virus particle releases out of the cell through the process of budding, which acquires a new envelope of viral protein. The virus infects the other cells.

HIV replicates billion of times by affecting the CD4 cells and progressively damages the immune system by making a person prone to many infections.