Animal cell culture is one of the important tools now in the field of life science. It is the in-vitro technique, in which the cells are grown in the laboratory conditions under proper nutrient source, growth factors and the controlled environmental conditions for the cell growth and division.

The cells in the animal cell culture are obtained by either enzymatic action like trypsinization or mechanically by mincing or chopping. In animal cell culture, the cells form a monolayer in the solid media and suspension in the liquid media. The method of a cell or tissue culture first involves the production of primary cells and followed by subculturing or passaging, it can produce secondary cells lines.

Firstly the antibiotics were developed to prevent contamination. Secondly, the cell obtaining techniques were introduced to produce cell lines by trypsin. Then, standard media were introduced, which made the growth of cells far easier and faster.

Animal cell culture is defined as the type of cell culture, in which the cell grows and multiplies either in a solid or liquid medium as a cell monolayer or cell suspension, respectively to produce the primary cells. Then, followed by subculturing of primary cells, it produces secondary cells to a definite cell number in the normal cells and indefinite in the continuous cells.

On the basis of cell growth and division, the animal cell culture is subdivided into the following two types:

It is defined as the cell culturing from the tissue of the host animal. The cells can be obtained directly by the mechanical method and indirectly by the enzymatic action. Once, the cells are obtained, they have to be cultured on a suitable container that must be provided with all the nutrients required for the cell division and growth. The growth of primary cells either occurs as an adherent monolayer on the solid media or as a suspension in a liquid medium.

The process of animal cell culture can be summarized into the following series:

Normal cells: These cells possess a low passaging value because they lose their ability to divide after some time due to cell ageing. Therefore, the cell divides to produce definite cell lines.

Continuous cells: These cells possess a high passaging value because the cells have the ability to continuously divide. Therefore, the cell divides to produce indefinite cell lines. 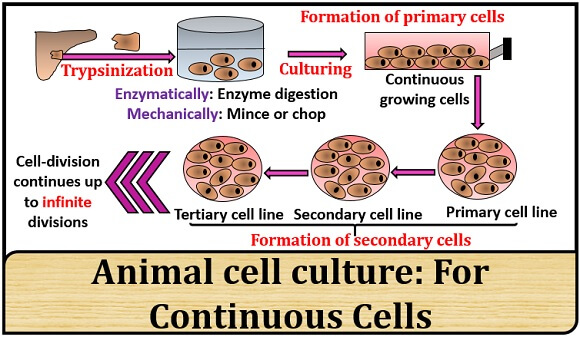 Passaging value is directly proportional to the cell type and cell division.

Difference Between Normal and Continuous Cells