Southern hybridization is the technique, first given by the scientist E. M. Southern in 1975. It is a type of blotting method that involves transferring the DNA from the solid agarose gel to the adsorbent medium like nitrocellulose or nylon filter paper. Southern blotting is done after DNA hybridization.

The target DNA is first cleaved by the restriction endonuclease called DNA digestion. Then, the cleaved or digested DNA is allowed to run over the agarose gel complex. After that, the DNA is subjected to denaturation by using alkali 0.5 M NaOH and depurination is also employed sometimes to reduce the size of DNA by using 0.2 M HCl.

The target ss-DNA then complementary pairs with the radioactively labelled DNA probe to form a ds-DNA, which can be visualized by the X-ray film. You will get to know the definition, principle, transferring mechanism, process and applications of the southern blotting method.

Southern hybridization is also called Southern blotting. It can define as the immobilization of the DNA fragments from the agarose gel matrix to the solid support matrix (nitrocellulose filter or nylon) to detect specific genes or sequences by using radioactive probes. Thus, it isolates target DNA or desired gene of a sequence by labelling it with the specific radioactive probe. The probe complementary binds with the target DNA that can be visualized on the X-ray film.

The southern hybridization is carried out to separate desired DNA. The target DNA reacts with a specific DNA probe, which results in a complementary pairing of ss-DNA with the radioactive probe. The probe is short, ss-DNA and labelled with a radioactive isotope. The probe binds with the target DNA can be visualized after exposing it to X-ray film by autoradiography.

The replicas of DNA on the agarose gel is transferred to the nylon filter by the capillary mechanism. The capillary action moves the buffer solution upwards to the nitrocellulose or nylon filter, which will hit the DNA to be print on the filter. The paper towel and weight do not allow the migration of DNA from the nylon filter. 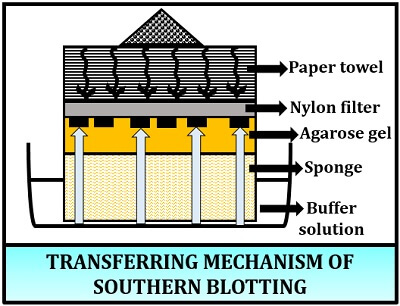 The gel is fragile, whereas the nylon filter is easy to handle and acts as a sticky membrane where the DNA bands stick easily. The filter membrane makes the further steps easier to perform like probe hybridization and autoradiography. 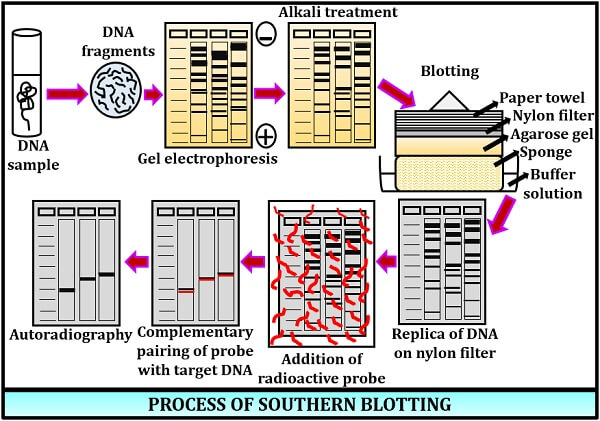 This step is called DNA digestion. Before restriction digestion, homogenization of the sample is performed to facilitate entire cell lysis by using detergent. It results in the expulsion of the DNA from the ruptured cell’s nucleus. Then, the extracted DNA is purified by alcohol precipitation. Finally, the extracted DNA molecule is cleaved into short fragments by the enzyme restriction endonuclease.

After the band formation, subject the gel matrix to the alkaline solution to denature the DNA or to break the ds-DNA into ss-DNA. For denaturation, 0.5 M NaOH solution is generally used. To reduce the size or the length of the separated strands, a technique called depurination is employed. Depurination makes the use of acidic solution (0.2 M HCl).

Southern blotting involves the transfer of the ss-DNA bands from the agarose gel to the nitrocellulose filter paper. Blotting is a very crucial step which has to be performed with care and it involves the following steps:

The transfer of DNA bands to the nitrocellulose filter is the process of forming replicas. The exact bands on agarose gel will now appear on the filter paper through the capillary action.

After blotting, bake the nitrocellulose filter membrane at 80 degrees Celsius for up to 10 minutes. Sometimes, UV-treatment is also employed to facilitate the cross-linking of the DNA strands to the filter membrane.

Then, hybridize the DNA bands of the nylon filter by adding radioactive probe in situ. The probe will bind with the desired DNA molecule by making it ds-DNA. The process is also called annealing. 32-P labelled ATP is most commonly used in the southern hybridization.

After the probe hybridization, wash the filter to remove the free probes. Then, expose the nitrocellulose filter to the x-ray film. The X-ray will help us visualize the hybridized or the desired DNA of interest on the nylon filter.

Therefore we can conclude that the southern blotting is a method of separating nucleic acid (only DNA). Southern is a type of blotting technique or hybridization method where the target DNA complementary pairs with the radioactive DNA probe. 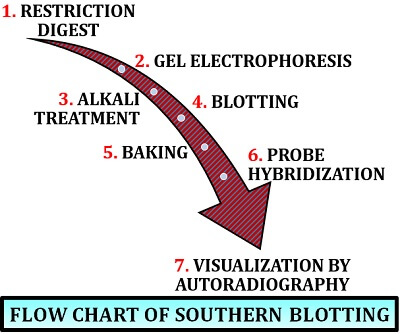 On the above, there is a flow chart of southern blotting which involves steps like restriction digestion, gel electrophoresis, alkali treatment, blotting, baking, probe hybridization and autoradiography.