Thus, an exotoxin produced by Clostridium botulinum is called botulinum neurotoxin, which blocks the synthesis of the neurotransmitter acetylcholine from the cholinergic neurons. Botulism causes symmetrical descending flaccid paralysis. A paralysis first starts from the face and then disseminates towards the limbs.

Clostridium botulinum produces a “Neurotoxin”, which is considered one of the potent substances for human health. A case of botulism was first recorded in the year 1735 in the people who consumed German sausages. In 1870, a scientist named Muller named the disease “Botulus” (derived from the Latin word for sausage).

Botulism is caused by a neurotoxin produced by Clostridium botulinum. Neurotoxin is an exotoxin, which affects the nervous system. Botulism is a clinical condition, paralyzes the involuntary muscles and further spreads to the respiratory system and the heart. Based on serological specificity, neurotoxins are categorized into the following seven serological types:

The spores of Clostridium botulinum sporulate to produce a neurotoxin, which can be present in the following food sources: 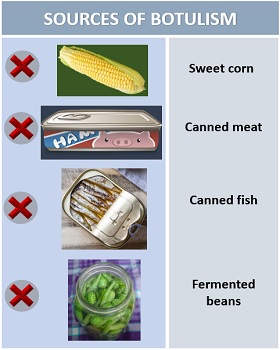 Spores of Clostridium botulinum generally grows in favourable conditions like:

There are three forms of botulism caused by Clostridium botulinum: 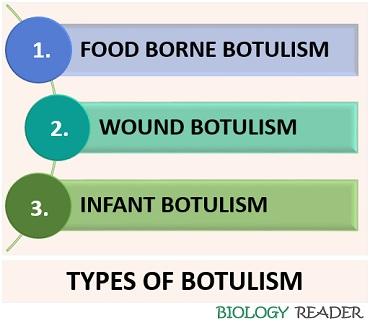 Foodborne botulism: It spreads by eating food contaminated with the spores produced by the Clostridium botulinum. Foodborne botulism develops after the consumption of unprocessed, undercooked, canned and unrefrigerated food.

Infant botulism: It spreads by the ingestion of the Clostridium botulinum spores that grow in the infant’s intestinal tract of age limit between 2-8 months. Infant botulism develops after the consumption of honey syrup.

In addition to this, there are some other types also that occur very rarely. Adult botulism is rarely seen, in which the spores of the Clostridium botulinum colonize in the digestive tract of adults. Iatrogenic botulism is very lethal, which occurs by an overdose of botulinum neurotoxin or botox.

Botulinum neurotoxin can produce the following type of effects: 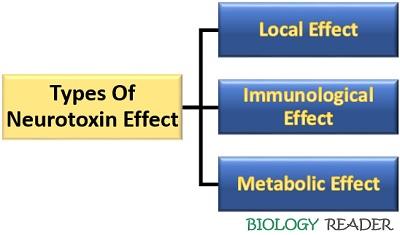 A neurotoxin produced by Clostridium botulinum can affect the cardiovascular, respiratory and central nervous system etc.

A neurotoxin produced by the Clostridium botulinum causes botulism by following a given pathogenic cycle: 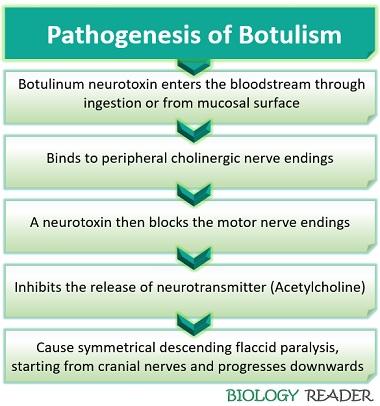 There are many cases of botulism, and if it remains untreated, then the mortality rate reaches about 50-60%. Treated patients may also concur with botulism, with a mortality rate of about 3-5%. The diagnosis or treatment of botulism should be made early otherwise, it can cause major outbreaks.

There are a few first aid measures that can control the transmission of the disease to some extent.

Foodborne botulism: To prevent its transmission

Wound botulism: To prevent its transmission

Infant botulism: To prevent infant botulism, keep the body hygienic and don’t give corn or honey syrup to the infants.

The early symptoms of botulism can be treated by the oral administration of polyvalent antitoxin. Enemas are found effective in the removal of the unabsorbed toxin.

If the mice live, by the injection of antitoxin and stool sample and die by the infusion of an untreated serum sample, then it gives a positive result for botulism. Mouse inoculation test detects the presence of particularly A, B and E serotypes of C. botulinum.