Oppositely, negative interaction may result in a benefit to one or both individuals. In the ecosystem, all the biotic components, i.e. living organisms, are dependent on each other for the sustenance or survival. Here, you will get to know the definition and all the types of positive and negative microbial interaction along with the examples. 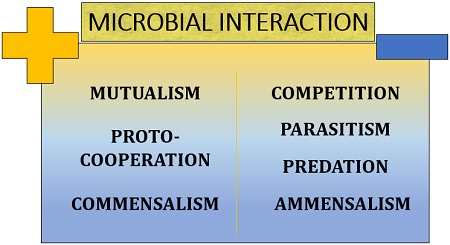 There are two types of interaction based on positive and negative affect. 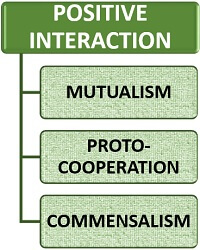 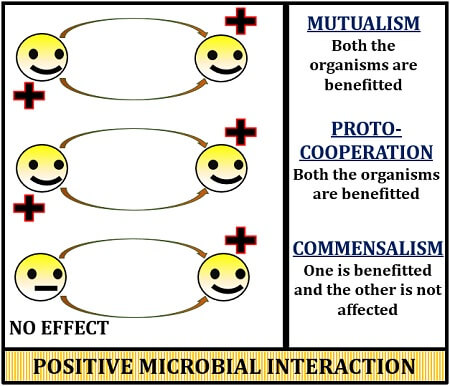 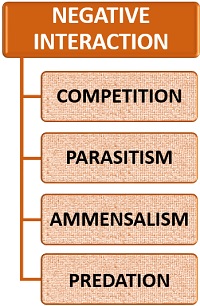 It is a negative interaction, where one organism closely depends and lives upon the other to invade all the nutrients is called a parasite. The parasite that attacks the other organism is called a host. In parasitism, the host-parasite relationship is an obligatory interaction where a parasite strongly needs a long interaction for its growth and multiplication.

It is also called Antagonism. It is a type of negative interaction where one organism produces inhibitory substance for the other. One population is either unaffected or benefitted, and the other is inhibited in the ammensalism. It is a type of chemical inhibition. Therefore, the effect of predation is 0/-, as a result of an interaction.

Example:
Bdellavibrio and some protozoans are the predators that attack the other bacteria. 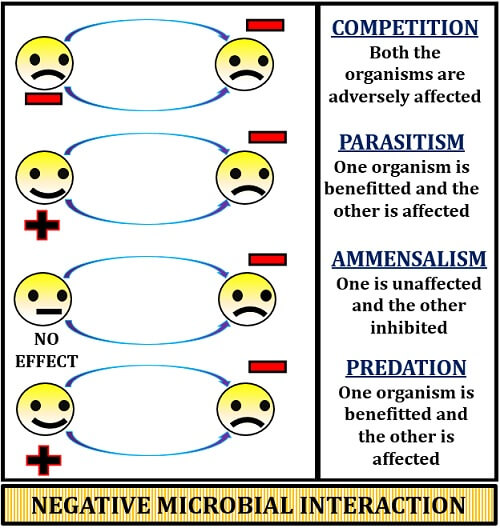 Therefore, we can conclude that all the biotic components like plants, animals, and microorganisms somehow relate to each other for the food, resources, and survival in the ecosystem. The interaction can occur either between the organisms of the same species or different species. Hence, some organisms cooperate for mutual benefit, and some compete with each other. The interaction between the two microbial population will definitely produce an effect which can be in one way or reciprocal.