The coagulase test is an analytical method that demarcates the staphylococci species into coagulase-positive and coagulase-negative species. Coagulase is an enzyme, which can either bound to the cell surface of bacteria as “Bound coagulase” or reside within the extracellular space as “Free coagulase”.

Slide and tube coagulation method come into use to confer the presence of bound and free coagulase, respectively. Coagulase binds with prothrombin, which results in the proteolysis of fibrinogen into fibrin.

In this context, we will discuss the definition, principle, purpose and the two popular methods of the coagulase test. You would also get to know the meaning of some important terms related to this context.

Let us discuss some important terms, which we must keep in mind while studying this article.

It refers to a protein enzyme, which associates with thrombin and forms the Staphylothrombin complex. It results in activation of the proteases, which eventually cause proteolysis of fibrinogen (glycoprotein). Thus, the peptide bonds of the fibrinogen break to produce visible strands of fibrin clots. 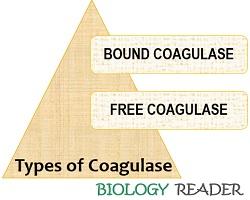 It refers to the fibrinogenase, which primary function is to form fibrin clots by causing proteolysis of internal fibrinopeptide in the fibrinogen’s plasma protein.

Thrombin works as a clotting enzyme, which comes into action after the splitting of prothrombin by the enzymatic activity of prothrombinase. Then, thrombin acts upon fibrinogen glycoprotein that further splits it into individual strands of fibrin.

It is a kind of glycoprotein, which functions as a substrate of thrombin. Fibrinogen is an extracellular protein in the plasma that acts as a “Determiner of platelet aggregation”. It has a molecular weight of 340kDa and an average 150-400 mg/dl concentration in the blood plasma.

Thrombin acts upon the substrate (fibrinogen). It breaks the fibrinopeptide bonds of α and β chains towards the amino terminal. The hepatocytic cells of the liver produce fibrinogen glycoprotein.

It is an insoluble protein, which appears as long fibrous threads. Fibrin is an active protein that participates in blood clotting. It helps in aggregating the platelets to form a spongy mass that stiffens to form a blood clot.

Coagulase positive microorganisms produce bound and free coagulase enzyme. The bound coagulase combines with the fibrinogen protein of blood plasma and ultimately leads to the precipitation or clumping of fibrinogen.

The cell membrane of some bacteria possess coagulases, which provide resistance against phagocytosis and other host defences. Therefore, the coagulase test also differentiates between the coagulase-positive and potentially virulent organism (Staphylococcus aureus) from the other isolates of Staphylococci.

The coagulase test aims the following: 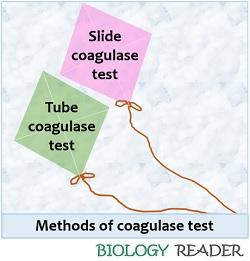 It detects the cell-bound coagulase, which directly agglutinates the plasma into fibrin clots. It involves the mixing of bacterial suspension with a drop of plasma. The agglutination of plasma indicates a positive coagulase test.

In contrast, the slides with a negative result are confirmed by following the tube coagulase test. Therefore, the slide coagulase test is a screening method that only checks coagulase’s presence or absence. 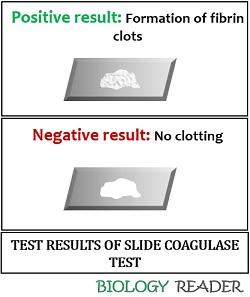 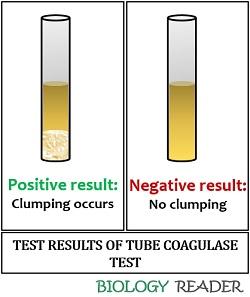