Oxidase test checks the production of cytochrome-c oxidases, whose presence in the test organism becomes evident by the formation of the blue-purple coloured complex (indophenols). It uses TMPD (tetramethyl phenylenediamine dihydrochloride) reagent.

In an oxidized state, TMPD develops a blue-purple coloured complex while remains colourless in a reduced state. Therefore, we can say that the oxidase reagent performs dual functions as a redox indicator and mediator.

Oxidase test refers to a biochemical test that differentiates organisms into oxidase-positive and oxidase-negative microorganisms based on the existence of cytochrome oxidase enzyme in the electron transport chain system.

The living organisms that possess cytochrome oxidases can oxidize the TMPD reagent into a blue coloured complex or indophenol. The organisms which lack such enzyme cannot oxidize the reagent and remains in a reduced form or appear colourless.

Before moving into the principle of the oxidase test, we must know the meaning of the following terms:

It mediates the transfer of electrons within the cytochrome-c reductase (Cyt-Q) and cytochrome-c oxidase (Cyt-IV). In humans, cytochrome-c proteins are coded particularly by the CYCS gene.

It is the fourth complex of the electron transport system, which commonly exists in bacteria, archaea and eukaryotes. It is generally a transmembrane protein and the last enzyme of the respiratory chain.

Cyt-c oxidase performs a significant role by receiving electrons from the cytochrome-c complexes and transferring them to the dioxygen electron acceptor. The final electron acceptor releases two water molecules by binding with the four proton ions.

It is also popular by the name of the “Wruster’s blue” reagent, which is incompatible with the active oxidizing agents. TMPD reagent works as a redox reagent that ascertains the presence of cytochrome-c oxidase in the electron transport chain. It also serves as an artificial donor, which passes the electron to the cytochrome-c complex.

The principle of oxidase test depends upon the mechanism of oxidation reaction, in which the organisms possessing cytochrome oxidase enzyme can oxidize the TMPD reagent into the end products like blue-coloured complex (Indophenol) and water. 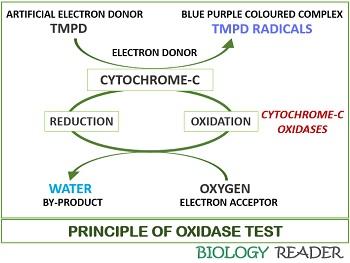 TMPD oxidase reagent will pass the electrons to the cytochrome-c oxidases, where the TMPD reagent turns into a TMPD radicle or acquires blue-purple colour.

Finally, the terminal oxygen carrier will accept the electrons from cytochrome oxidase and binds with protons to release water. In contrast to this, the organisms deficit of cytochrome oxidases will not oxidize the TMPD reagent.

To perform the oxidase test, we need:

Procedure and Methods of Oxidase Test

Oxidase test can be performed by employing the following methods: 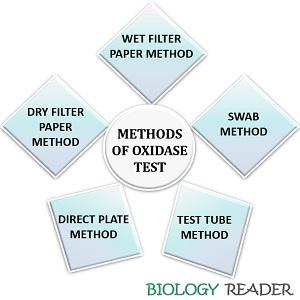 In this method, we need to saturate the Whatman’s no.1 filter paper in the 1% N, N, N-tetramethyl p-phenylenediamine dihydrochloride reagent. After that, subject the filter paper to the process of freeze-drying and later keep it in a screw cap bottle (under dark place). 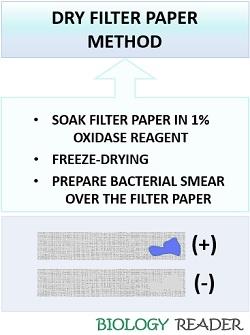 In this method, take the filter paper discs infused with the oxidase reagent and directly rub the culture of the test organism via a wooden applicator. At last, observe the filter paper for the appearance of a blue-purplish colour. 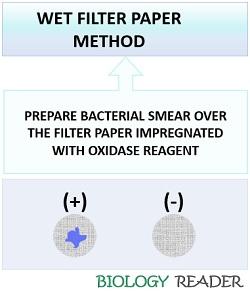 It is a very convenient method and a single step procedure, which involves the addition of TMPD oxidase reagent over the suspected colonies. 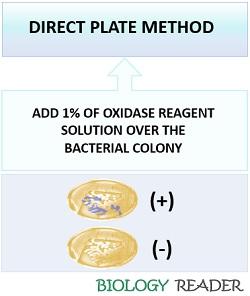 It is a simple procedure that involves dipping of the sterile cotton swab in the solution of 1% TMPD reagent. Afterwards, gently touch the cotton swab over the suspected colony and look for any colour changes in the swab’s bud. 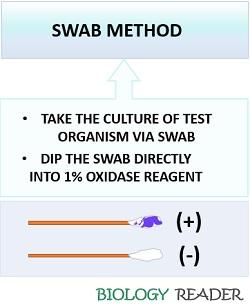 In this method, prepare nutrient broth media and pour up to 4.5 ml into the test tube. Then, inoculate the test organism and incubate for at least 24-48 hours at 35 degrees Celsius.

After incubation, add oxidase reagent (0.2 ml) into the culture tube and shake vigorously. At last, look at the culture tubes for the appearance of a bluish-purple colour. 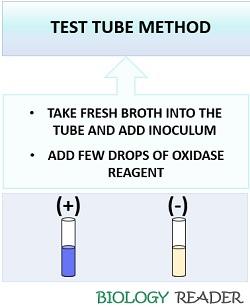 There could be three possible outcomes:

Aerobic bacteria possess cytochrome oxidase that constitutes a part of the aerobic respiratory chain. Thus, the oxidase test also distinguishes aerobic organisms from the facultative aerobes, strict and facultative anaerobes. Oxidase test is useful in speciation, as it differentiates Pseudomonas from other related species.

The reagents should be freshly prepared; else, the oxidase test may give diversifying results. A test organism must be 18-24 hours old. The test organism isolated from non-selective and non-differential media is preferred for identification and classification.

Growth medium supplemented with dye can give erroneous results. It uses a platinum loop instead of iron or nichrome to avoid false-positive results from the surface oxidation during flaming.