The dark reaction of photosynthesis refers to the phase that doesn’t need light energy or photons to complete the cycle and hence also called the light-independent photosynthetic phase. Dark reaction or Calvin cycle was first explained by a scientist named Melvin Calvin. It occurs at the site of the chloroplast within the fluid surrounding the thylakoid that refers to the stroma.

In a dark reaction, the photosynthetic organisms make glucose which a cell utilizes to make other essential components. Plant cells harness the high energy products (ATP and NADPH) of the light reaction to construct sugar molecules.

Therefore, the dark reaction does not require light energy directly. However, it somehow depends upon the by-products of light-dependent reactions, i.e. ATP and NADPH, to facilitate the production of glyceraldehyde 3-phosphate.

The dark reaction refers to the bio-synthetic phase or carbon reduction phase, which fix the atmospheric carbon dioxide into useful compounds like glucose. It occurs in the stroma of the chloroplast, which encircles the thylakoid sacs. The Calvin cycle uses ATP and NADPH from the light reaction to form sugars. The conversion of  CO2 into sugar goes through three phases:

The above three sequential steps collectively called the Calvin cycle or dark reaction.

It occurs in the stroma. The light reaction of photosynthesis produces ATP and NADPH that collectively initiate Calvin’s cycle and releases ADP, Pi and NADP+ that is again utilized by the cells to form high energy molecules during the light reaction. 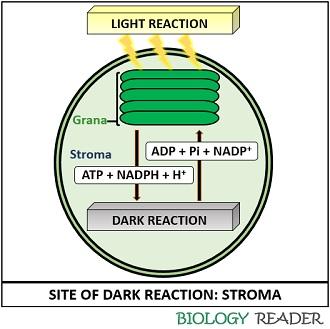 With his co-workers at the University of California, Melvin Calvin used the radioactive isotope of carbon (carbon14) to trace the pathway. In his research, Calvin suspended chlorella first in water and then subjected it to sunlight. Later, he labelled it with carbon-14 (a radioactive carbon).

Then he took individual cells of chlorella and killed them in hot methanol, and examined the series of compounds containing the radioactive carbon at different stages of its photosynthetic pathway. Melvin Calvin described the whole process by publishing a book named “The Path of Carbon in Photosynthesis” in 1957 and The Photosynthesis of Carbon Compounds in 1962.

Calvin concluded that the plants transform light energy to chemical energy via electron excitation through the array of light-harvesting and accessary pigments. Later, his research on carbon compounds formed during photosynthesis was known after his name (Calvin’s cycle). 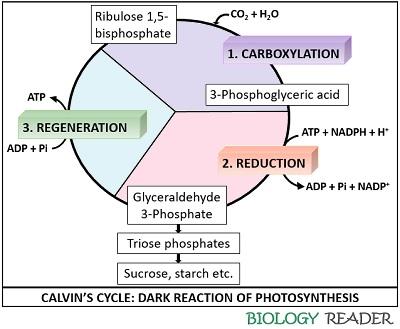 It is the second and the most crucial stage of the Calvin cycle, which uses energy molecules (ATP and NADPH) coming from the light-dependent photosynthetic phase and the specific enzyme system.

The 3-Phosphoglyceric acid goes through a reduction reaction via an enzyme phosphoglycerate kinase, which phosphorylates 3-PGA by using ATP to form glycerate-1, 3-bisphosphate and by-products (ADP and Pi).

Plants use up the glyceraldehyde-3-phosphate during cellular respiration to form glucose and other carbohydrate sources. Glucose being a 6-C compound, requires two G3P molecules to produce one glucose molecule.

It is the last stage of the Calvin cycle, which involves the regeneration of RuBP or allows the cycle to continue. Six molecules of carbon dioxide produce twelve molecules of glyceraldehyde 3-phosphate.

Out of twelve, plant cells use ten molecules of G3P to synthesize ribulose bisphosphate by utilizing six molecules of ATP. Thus, RuBP can again bind to the incoming carbon dioxide and restart the cycle. The hydrolysis of ATP produces six molecules, each of ADP and inorganic phosphate. The remaining two molecules of G3P are necessary for the synthesis of glucose.

A Calvin cycle produces 2 glyceraldehyde-3-phosphate (G3P), 3 ADP, and 2 NADP+ as the products in one turn.

Therefore, the Calvin cycle is the second phase of photosynthesis that mediates the synthesis of bioorganic compounds necessary for cell function and metabolism. Dark reaction utilizes ATP and NADPH energy molecules coming from the light reaction of photosynthesis for the regeneration of RuBP and carbohydrate synthesis.