Chloroplast in a plant cell exists as a membrane-bound cell organelle and contain chlorophyll pigments that are absent in the animal cells. The study of chloroplast was first carried by a scientist named Hugo Von Mohl in the year 1837.

After his study, it was found that the chloroplasts were the type of plastids and named “Chloroplastids” by scientist Schimper in 1883. Then, Eduard Strasburger coined the term “Chloroplast” in 1884.

This evolution of the chloroplast from the endosymbiosis of cyanobacteria was introduced in 1905 by a scientist named Konstantin Mereschkowski. This post discusses the definition, general characteristics, structure, location and functions of the chloroplast.

Chloroplast is a type of plastid, which exists as a double membrane-bound cell organelle that produces energy through photosynthesis. Chloroplasts show “dimorphism” as they can exist in two different forms, namely granal and agranal.

Let us look into some general characteristics of a chloroplast by knowing its size, shape and number.

Chloroplasts possess variable size that differs from one plant to other. The length of the chloroplast ranges 5-10 micrometres, and the diameter ranges 2-4 micrometres.

The number of chloroplasts varies between different photosynthetic organisms.

A chloroplast is a kind of plastid, which is a double membrane-bound organelle and consists of the following structural elements: 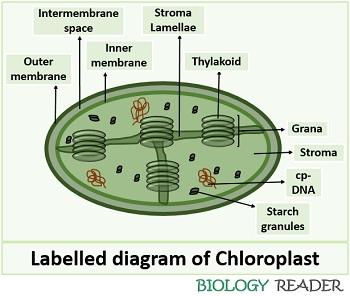 Chloroplasts possess a specialized part (thylakoid) where the chlorophyll pigments are embedded. 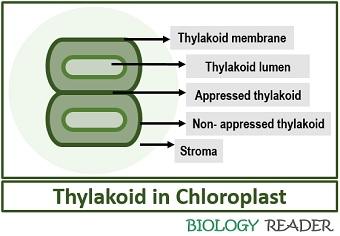 Stroma lamellae: They exist as the tubular structures formed by the invagination of the inner chloroplast membrane. Lamellae act as a skeleton of chloroplast by maintaining a proper distance between thylakoids or protect from overlapping.

Location of chloroplast in plant cell

Chloroplasts are the essential cell organelles in a plant cell located within the leaves’ mesophyll cells. Mesophyll cells consist of: 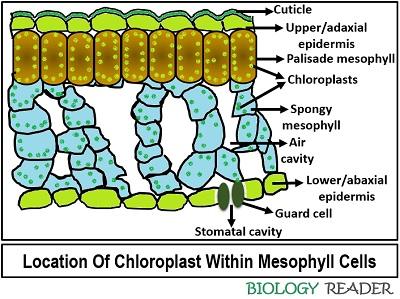 Functions of Chloroplast in plant cell 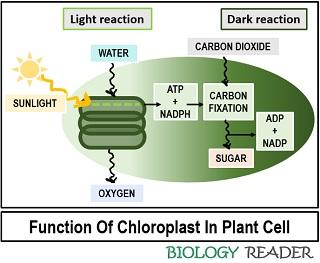 Role in photosynthesis: Chloroplast acts as a location of photosynthetic activity, where the chlorophyll pigments inside it trap the light energy to transform it into chemical energy.

The light reaction of photosynthesis, i.e. conversion of H2O into O2, occurs in the thylakoid by releasing ATP and NADPH. Dark reaction or the fixation of CO2 into sugar takes place in the stroma by producing ADP and NADP.

After reduction of CO2 into sugar, hydrolysis of ATP and NADPH molecules occurs that eventually release ADP and NADP. Thus, chloroplast drives some of the energy to break down carbohydrates and facilitate other cellular processes.

1 thought on “Chloroplast in Plant Cell”