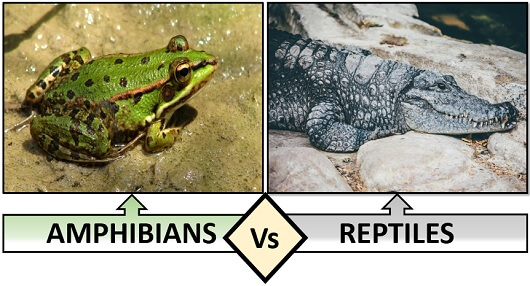 Amphibians have dual existence in their life cycle, whereby getting birth they adapt themselves to the aquatic habitat and by attaining maturity they live in the terrestrial habitat. In contrast to this, reptiles do not exist such dual life cycle.

The type of fertilization is external in amphibians whereas internal in reptiles.

The skin type of amphibians is smooth and moist whereas hard and dry in reptiles.

These are the animals which belong to the phylum “Chordata” and class “Amphibia” which are ectothermic with soft and moist skin. Amphibians exist dual modes in their life cycle, wherein the first phase, i.e. larval stage they dwells in the aquatic habitat and the second phase, i.e. Maturity stage, they dwell in the terrestrial habitat.

Metamorphosis: The larval stage of amphibian have developed gills to respire in the water and on maturity, they have developed lungs to respire. Some of them use skin surface for the exchange of gases like frogs, terrestrial salamanders etc.

Nutrition and digestion: Amphibians have protruded and muscular tongue through which they can catch their prey. The prey then goes through the short oesophagus lined by cilia to the stomach by the help of mucus. The digestive enzyme “Chitinase” present in the stomach, helps in the digestion of chitinous cuticle of the prey.

Circulation: These contain three-chambered heart, i.e. two atria and one ventricle in their circulatory system.

Nervous system: The nervous system consists of a central brain, spinal cord and nerves with a less developed brain.

Excretion: For the excretion, these have two kidneys which excrete uric acid majorly from the cloacal vent.

These are the animals which belong to the phylum “Chordata” and class “Reptilia” which are ectothermic with hard and dry skin. Reptiles do not exhibit dual modes in their life cycle, and they can live in a variety of habitats.

Metamorphosis: Reptiles do not undergo a metamorphosis during their life cycle, i.e. they lack larval stage, unlike amphibians.

Respiration: For the process of breathing, these majorly respire through lungs and for the gaseous exchange, these have permeable skin and modified cloaca.

Shedding: It is another property which distinguishes them from the amphibian, also refers as “Ecdysis” which occurs through their lifetime.

Circulation: Amphibians have three-chambered heart consists of two atria and one ventricle which subdivides into two aortas.

Nervous System: These also contain a central system, spinal cord and nerves. Reptiles are having twelve pairs of cranial nerves.

Similarities between Amphibians and Reptiles

Key Differences Between Amphibians and Reptiles

Therefore amphibian and reptile are the vertebrate animals which are ectothermic or cold-blooded. Both of them share many differences and some similarities, which we have discussed in this content.

We can distinguish both of them based on scale presence and skin type. The examples of amphibians are frogs, salamanders, toads etc. which lacks scales on their body and having moist and soft skin. The examples of reptiles are turtles, snakes, crocodiles, lizards etc. whose body is protected by the presence of scales with hard and dry skin.

1 thought on “Difference Between Amphibians and Reptiles”