Cloud formation can be seen in the earth’s homosphere. Nephology is the science of clouds. Clouds form by the condensation of water vapours into water droplets or ice crystals. Stratus, cirrus, stratocumulus, cumulus and cumulonimbus are common types of clouds in the troposphere, stratosphere and mesosphere.

Clouds in the stratosphere and mesosphere regions appear as sheets, wisps or ripples. Oppositely, clouds in the troposphere are responsible for the climatic changes on earth. Clouds are generally classified as high, mid and low-level clouds based on the distance from the ground surface.

This post mainly explains the definition, some fun facts about clouds and steps involved in cloud formation. You will get to learn the types of clouds based upon their appearance and the kind of weather they produce, along with the diagrams of each type.

They are the visible masses of clumped water droplets or ice crystals in the atmosphere. Earth’s weather and climate are generally monitored by the type of cloud formed in the atmosphere. For the clouds to appear, the evaporation of water vapours is the preliminary step. Later, vapours condense into water droplets or ice crystals. Water molecules possess cohesion property through which they interact with the smoke and dust particles and ultimately form clouds.

Clouds usually appear white, blue or grey, and may also appear brightly coloured. The appearance of white clouds is due to the uniform scattering of all the wavelengths of visible light by the molecules of water droplets or ice crystals, and the mechanism is called Mie scattering. Hence, clouds generally look white against the blue sky.

When direct sunlight is not striking the clouds, i.e. during the morning, they appear blue due to light reflection. Sometimes, haze and dust in the atmosphere are responsible for the yellow, orange and red colouration of clouds. 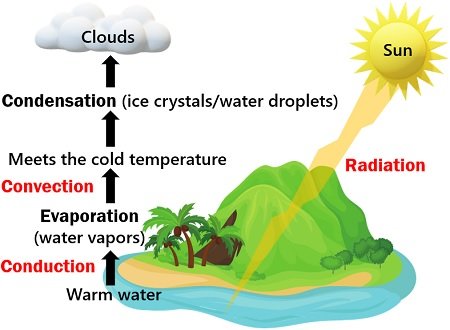 We know that evaporation is the phase transition of water from a liquid to the gaseous phase. Evaporation is very much similar to the vapours produced during the boiling of water.

Likewise, the sun’s radiations heat the water bodies like ponds, lakes, oceans etc., to produce water vapours. Eventually, the water vapours become suspended in the air, and they possess considerable freedom of movement or kinetic energy.

Thus, water molecules in the gaseous state have enough energy to escape due to their lower density than the air surrounding them. As a result, tiny particles or water vapours rise upwards into the air above the surface through evaporation.

The warmer the water is, the particles have more thermal energy and have high tendency to escape into the air. Likewise, the water can evaporate faster as the air with low relative humidity increases. Plants also release water vapours through tiny pores (stomata).

Guard cells regulate the opening and closing of the stomatal apertures to allow gaseous exchange between plant cells and surrounding through a process known as transpiration. Therefore, evaporation and transpiration are the two processes releasing water vapours into the atmosphere. 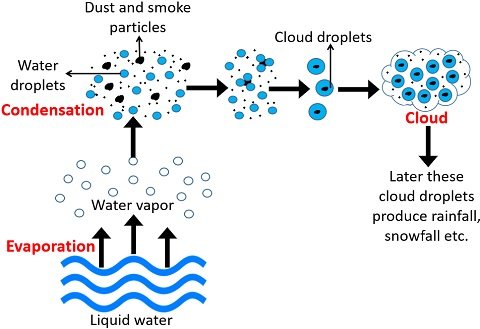 After evaporation, the warm air parcel goes much higher in the sky and reaches a certain height where the temperature and atmospheric pressure drop. At this point, the warm air parcel becomes cool as the surrounding air cools below its dew point or point of saturation.

Clouds are colloids containing water droplets or ice crystals and wastes. They vary in shape and size. Clouds form at the ground surface are called fog or mist. Cirrus, stratus and cumulus are the three common types of clouds. Besides that, you can see some other forms of clouds in the troposphere. Depending upon the distance from the earth surface, clouds generally appear at high, mid and low altitudes. 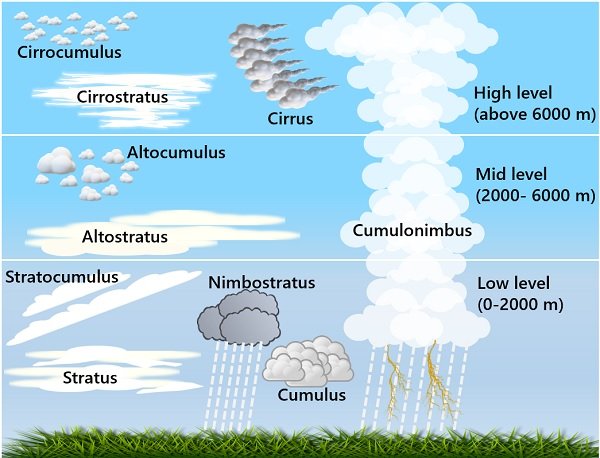 They appear at nearly 5-13 Km above the earth’s ground surface and include cirrus, cirrocumulus and cirrostratus clouds. High-level clouds primarily contain ice crystals.

They appear at nearly 2-7 Km above the earth’s ground surface and include altocumulus, altostratus and nimbostratus clouds. Mid-level clouds may contain a combination of water droplets and ice crystals.

They appear at nearly 0-2 Km above the earth’s ground surface and include stratus, cumulus, cumulonimbus and stratocumulus clouds. Low-level clouds are made of water droplets.

Cloud formation plays a significant role in the water or hydrological cycle, as precipitation of clouds produces rainfall that brings water back into the ground. In addition, clouds play a key role in weather forecasting.