Example: People who face difficulties in reading letters of a newspaper, at the time of cutting vegetables and while operating a mobile device etc. are some examples of hypermetropia. Oppositely, a person who faces difficulties in seeing the distant vehicles while driving and in recognizing the face of a person standing far away etc. are a few examples of myopia.

It is also called Nearsightedness. It is a refractive error, in which a person can only see the nearby objects clearly, but the visibility to the distant object is not clear. It is caused due to the more focusing power of an eye due to the large size of an eyeball. As a result, a myopic person when looks at the distant objects, the light will fall in front of the retina (unlike a normal eye) and the image appears blurred or hazy.

It is also called Farsightedness and hyperopia. It is a refractive error, in which a person can only see the far objects clearly, but the visibility to the near object is not clear. It is caused due to the low focusing power of an eye due to the small size of an eyeball. As a result, a hypermetropic person when looks at the nearby objects, the light will fall far back of the retina (unlike a normal eye) and the object appears blurred.

The characteristic difference between the myopic and hypermetropic eye is in the formation of an image:

There is a diagram given below, which depicts the comparison between the image formation in the normal eye with the myopic and hypermetropic eye. 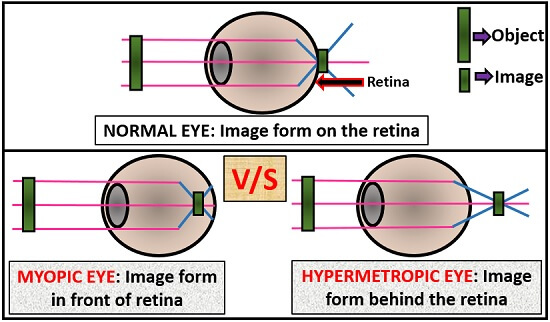 The correction of myopia is through the concave lens (diverging lens), which has a negative refractive power that increases with the severity of myopia.

And the correction of hypermetropia is through the convex lens (converging lens), which has a positive refractive power that also increases with the severity of hypermetropia.

Classification of Myopia and Hypermetropia

Based on the refractive error, myopia and hypermetropia can be classified into the following three types:

Complications of Myopia and Hypermetropia

Terminologies for the complications that are caused by both myopia and hypermetropia are discussed below:

Key Differences Between Myopia and Hypermetropia

Therefore, we can conclude that both myopia and hypermetropia are the refractive errors, i.e. the clinical condition that occurs due to the change in the size of an eyeball and the light or the image not focus on the retina unlike a normal eye (where image focuses on the retina). These two conditions can be caused due to heredity, muscle dysfunctioning of an eye, trauma etc.