Chlorophyll in plants refers to a pigment molecule that imparts a green colour to the leaves and stems by absorbing a red and blue spectrum of light. The term chlorophyll has originated from the Greek terms “Khloros” (green) and “Phyllon” (leaf).

It plays a fundamental role in photosynthesis by allowing plants to absorb light energy and convert it into chemical energy. Besides plants, chlorophyll pigments also exist in the mesosomes of cyanobacteria and chloroplast of algae.

There are two kinds of chlorophyll pigments (type a and b) that predominates in the plant. Both chl-a and chl-b are light-absorbing pigments that absorb a specific wavelength of white light. Chl-a absorbs dark blue and red light, whereas chl-b absorbs light blue and red-orange light within the visible light spectrum.

This post describes the meaning, discovery, structure, types and interesting facts about chlorophyll pigments. You would also get to know the reason behind the green colour of the chlorophylls.

Chlorophyll refers to a light-absorbing pigment molecule that reflects a green colour to the chloroplast containing tissues by absorbing light of longer wavelength (red) and light of shorter wavelength (blue) of the electromagnetic spectrum. Chlorophyll a and b are the two significant forms. These two pigments differ by having different side-chain composition and distinct absorption tendency.


Why is Chlorophyll green?

Chlorophyll is a green pigment, which absorbs the red and blue spectrum of visible light and transmits green light. Due to the reflection of green light, all the chlorophyll-containing tissues or organelles appear green-coloured. The green colour of the leaves and stems is also due to this chlorophyll pigment. 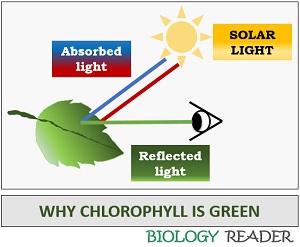 A typical composition of chlorophyll comprises a porphyrin head and a long phytol tail. Chlorophyll is a chelating ligand, which includes a central metal ion attached to the complex organic compound containing a mixture of carbon, nitrogen and hydrogen elements. 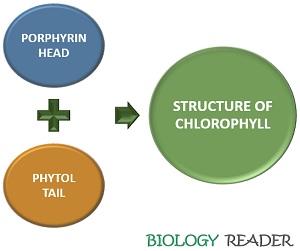 The structure of chlorophyll is characterized by: 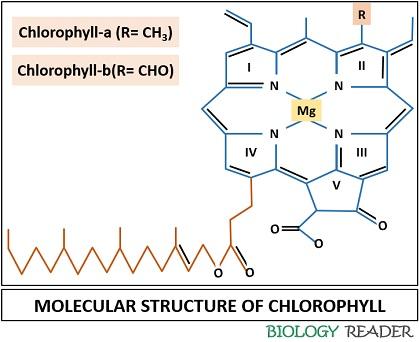 The porphyrin ring has a square planar arrangement, where the four nitrogen atoms join the four pyrrole rings to the central magnesium ion. Besides plants, the porphyrin ring also exists in haemoglobin and vitamin-B12 molecules, and it has different central atom-like iron and cobalt, respectively.

To the base of the porphyrin ring, an extra isocyclic ring is present. A porphyrin ring is a stable ring around which an electron can migrate freely. It results in a high tendency of porphyrin ring to gain or lose electrons.

It associates with the porphyrin head via ester. It refers to the unsaturated hydrocarbon chain that contains 39 H-atoms and 20 C-atoms with two C-C double bonds.

A phytol chain is composed of four isoprene units with a chemical name (2-methyl-1, 3-butadiene). One isoprene unit has a molecular formula C5H8, as it consists of five carbon atoms and eight hydrogen atoms.

Types of Chlorophyll in Plants

Chlorophyll-a and Chlorophyll-b are the two common pigments in plants. 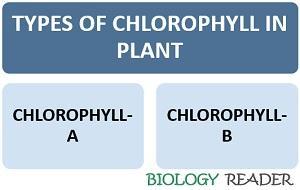 Chl-a serves as the primary light-absorbing pigment. Oppositely, chl-b works as an accessory pigment. Both the pigments absorb light of a certain wavelength from the incoming white light emitted by the sun.

A thylakoid membrane involves many light-absorbing and accessory pigments that collectively form a Photosystem. An antenna or light-harvesting complex plus an active reaction centre constitute a photosystem. Chl-a is a primary pigment that absorbs the light energy (photons) from the sun (carries a bundle of photons) and passes it to the other pigment molecules till it outreaches a reaction centre.

There are some interesting facts about chlorophyll that we must explore.

During plant senescence and fruit ripening

Plants degreen during the senescence stage and at the time of fruit ripening because, during that period, the chlorophyll pigments transform into colourless tetrapyrroles or NCC’s (Non-fluorescent chlorophyll catabolites).

Chlorophyll has the highest absorbing capacity among the plant pigments, due to which it dominates or masks the leaf by its green colour. Once chlorophylls start to decompose, the colour of the leaves turns red, yellow, orange etc. For a plant to appear green, it must continuously replenish the chlorophyll.

Chlorophyll has a wide range of medicinal uses. It serves as a natural body cleanser. Its regular uptake can reduce the faecal and urinary odour. Chlorophyll increases the bone, nail and teeth strength. It also provides immune support by increasing the RBCs count and reduces colon and liver cancer by interfering with the procarcinogens. Chlorophyll also detoxifies the blood by eliminating impurities from our body.