What is muscle?
A muscle is fibrous and dense tissue, which consists of thin and elongated cells refers to “Muscle fibres“. These muscle fibres are the individual cells which are up to 30cm long. The muscle fibres consist of thin filaments or strands which refers to “Myofilaments”.

These are the muscles which attach to the bone. The muscle action is in our control when to use them. “Somatic nervous system” controls its functioning, and therefore voluntary muscle is ‘Dependent‘. A skeletal muscle is a type of voluntary muscle, which appears as elongated and cylindrical muscle fibres.

These are the muscles which attach to the wall of internal organs, and the muscle action is not in our control. “Autonomic nervous system” controls its functioning and therefore it is ‘Independent‘. Smooth and cardiac muscle are the two types of involuntary muscle. Smooth muscles are small, spindle-shaped muscle fibres. Cardiac muscles are small, cylindrical and branched muscle fibres.

The characteristic structural features of voluntary skeletal muscles are: 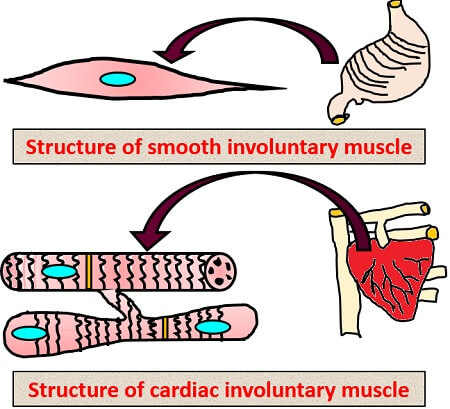 The characteristic structural features of involuntary smooth and cardiac muscles are:

Therefore, we can conclude that both the voluntary and involuntary muscles are the types of muscle tissue, in which a former is dependent and the latter is independent. Thus, both perform different functions like the movement of the body or body organs, muscle contraction and relaxation, and also gives strength to the body to lift the things.