Sclerenchyma tissue refers to one of the types of ground or simple permanent tissues, which possesses both primary and stiff secondary wall. They exist as rigid woody cell with a compact arrangement.

Sclerenchyma tissues aid cell integrity and conduction instead of being a dead cell. During the plant’s secondary, the sclerenchyma cells attain maturity and become dead cells due to lignin deposition.

Lignin restricts the exchange of water and gases, resulting in degeneration of inner protoplasm. This post discusses the definition, characteristics, types and functions of the sclerenchyma tissues.

Sclerenchyma tissue refers to the type of simple-permanent tissue, which initially exists as a living cell but becomes dead during the secondary wall development due to lignin accumulation.

“Lignification” refers to the phenomenon of lignin accumulation in the plant cells, which occurs after the completion of cell growth, and at the time of secondary thickening. Sclerenchymatous tissue predominates in the rigid areas of the plant body like leaf vein, stem, branches, trunk, bark etc.

Based on the function: A sclerenchyma tissue is broadly classified into two classes, namely mechanical and conductive sclerenchyma. 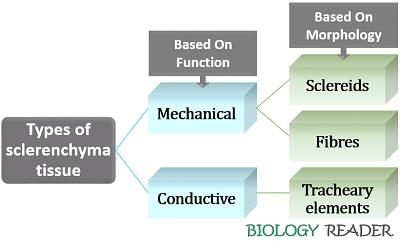 It is a kind of sclerenchymatous tissue that functions as a supportive tissue, which minimizes wilting in plants, maintains plant physiology, and provides strength to withstand the tearing forces of waves and current. Mechanical sclerenchyma comprises sclereids and fibre cells that contribute strength and stiffness to the plant system. 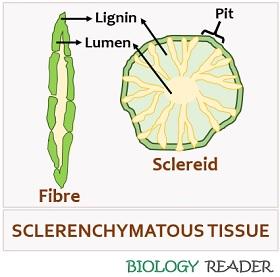 Sclereids refer to the mechanical tissues that occur singly or in groups. They are found associated with the plant’s vascular tissue, namely the xylem and phloem. Cell-wall thickening is non-uniform in sclereids.

They contain several simple pits with round apertures. Sclereids usually possess a narrow lumen. Based on the shape, the sclereid cells subdivides into the following classes: 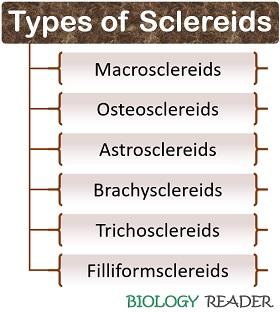 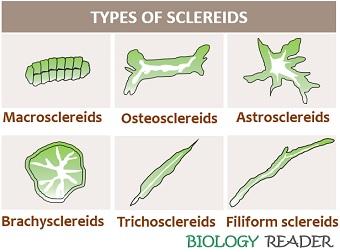 Fibres are other mechanical tissues that appear elongated and thick-walled with a narrow lumen and tapered ends. They generally constitute the plant’s ground and vascular tissues. Fibre sclerenchyma serves as a cell companion to the xylem and phloem tissues. They appear as independent strands or cylinders. Based on the shape, the fibre cells are categorized into the two following groups: 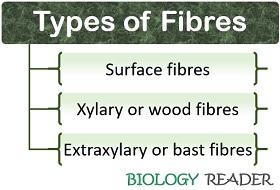 They are associated with the tissues outside the xylem (like phloem, cortex and pith of a plant cell). In monocots, the extraxylary fibre encircles the bundle sheath. They originate partly from the ground meristem and remaining from the procambium.

In dicots, the extraxylary fibres persist as independent bands or cylinders on the peripheral region of the vascular cylinder and innermost cortex layer. They originate wholly through the ground meristem tissues, whose structure, shape and composition are similar to the xylary fibres. The extraxylary fibres have three common types:

They occur in vascular plants and include vessel elements and tracheids. 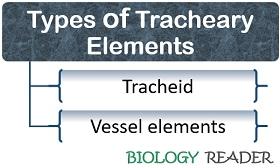 They are a more specialized form of tracheary elements. Vessel elements have a small size than the tracheids. The vessel elements interconnect with the other vessels from one end of the cell to the cell’s other end in vertical rows. 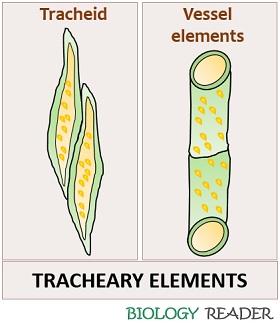 They are the common cells in the xylem, which appear spindle-shaped and elongated with tapered ends. They participate in both water conduction and mechanical support. Tracheids appear elongated compared to the vessel elements and have a common feature in having a secondary wall thickening. They vary in shape (ranges from annular rings, reticulate etc., to pitted form).

Sclereids support the neighbouring tissues and protect the inner cells by forming a concentrating layer towards the periphery.

Tracheary elements or vessel elements solely participate in the water conduction. Tracheids have a high surface to volume ratio, protecting the plant from air embolisms or water stresses.