Based on the factors like temperature, pH, oxygen concentration, nutrients availability etc. the dimorphic fungi exists in two forms or structures, namely filamentous and yeast-like phase. Temperature is the primary factor of phase transition, and based on it, thermal and non-thermal are the two forms of dimorphic fungi.

The thermal and non-thermal dimorphic fungi infect humans, animals, rodents and insects and the latter are mainly phytopathogens. In this context, we will discuss the dimorphic behaviour and the two different phases of dimorphic fungi along with some important pathogens that are included in this group.

The dimorphic fungi exist in two forms at different environment, temperature, oxygen concentration etc. and the property exhibited by them is known as dimorphism. Filamentous and yeast-like phases are seen in their life cycle, which mainly depends upon the temperature and can be thermally dimorphic. Except for Coccidioides immitis, all are thermally dimorphic. 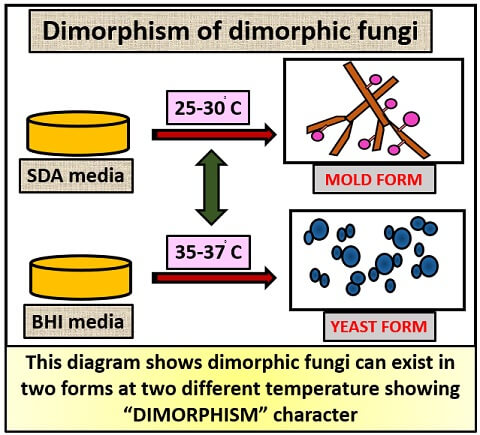 The general growth cycle of mould

It includes the following steps:

The general growth cycle of yeast

It includes the following steps:

But in dimorphic fungi, these two growth cycle occurs one by one in its lifecycle:

In the mould phase :

In the yeast phase:

Therefore, these two phases switch to one another, and the whole diagram is given below that is showing the life cycle of dimorphic fungi: 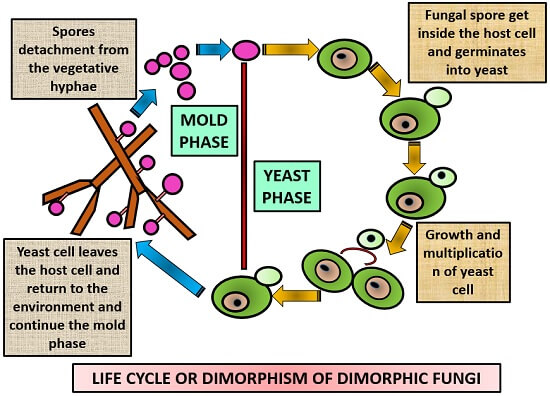 Table showing the growth conditions required in the mould and yeast phase:

Dimorphism of dimorphic fungi can be explained by taking a few examples like: 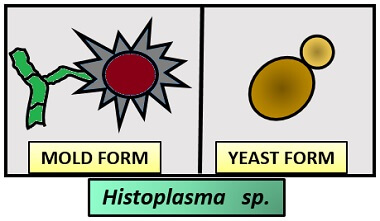 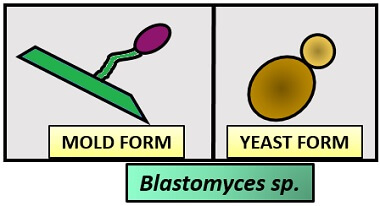 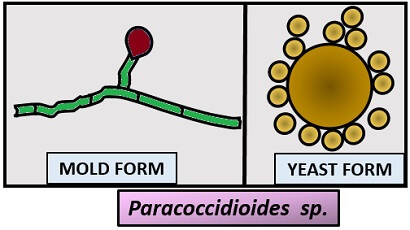 The transmission of diseases by dimorphic fungi can occur through the following ways:

Diseases caused by dimorphic fungi can be diagnosed by:

For the treatment of diseases caused by dimorphic fungi, some antifungal agents like Itraconazole, Fluconazole, Triazoles are being used in mild cases. In severe cases, Amphoterin-B is applicable.