We must have heard that the enzymes are the biocatalysts, but we need to know what biocatalysts do. The participation of enzymes in any biochemical or biological reaction is referred to as “Catalyzed reaction”, and they only speed up the reaction upto 107 to 1020 times.

Therefore, enzymes serve as a biocatalyst that only increases the reaction rate or the conversion of reactants into products. It is important to keep in mind that the enzymes are never used up in the reaction, which means they remain free after the release of products.

Enzymes can catalyze the same chemical pathway several times until they get denatured and associate with the inhibitors. In this context, we will study the mechanism of enzyme action through three popular models (lock and key hypothesis, Induced fit model and Michaelis and Menten’s equation.

You will also get to know the difference between the mechanisms of enzyme-catalyzed and uncatalyzed reaction (without enzyme) along with the meaning of some important terms relative to the study of the enzyme’s mechanism.

Before proceeding to the mechanism of enzyme action, we must have a brief knowledge of the following terms:

Enzymes: These are the 3-D proteinaceous organic compounds, which function as a “biocatalyst” to increase the reaction’s speed. Enzymes are specific due to the presence of a distinct region called an active site of an enzyme.

Enzyme catalysis is necessary for many biological or biochemical pathways to occur or essential for the chemical interconversions that sustain life. Let us look into a few examples of enzyme catalysis:

Substrates: In terms of enzymology, the substrates refers to the reactants molecules, which form a temporary association with an enzyme or turn out to form an enzyme-substrate complex (E-S complex). Various bonds form between the initial contact of the two, i.e. an enzyme and substrate that releases binding energy to create a perfect fit.

Products: In terms of enzymology, the products refer to the species or molecules form by the conformation changes in the enzyme-substrate complex. The enzymes attain their original state after the release of products, and they are available for the substrate molecules to undergo the same pathway.

The mechanism of enzyme action typically depends upon the activation energy. Enzymes participating in any chemical reaction reduce the activation energy and decreasing the time between the substrate’s interconversion into a product. Therefore, to study the enzyme’s mechanism more in detail, we must know the meaning of the following terms:

Activation energy: It refers to the minimum energy required for the substrates to get into the transition state and contort the substrate molecules into the desired products. Reactants can form products by utilizing the heat energy from the surroundings. But, the reactants in association with enzymes release products more rapidly. 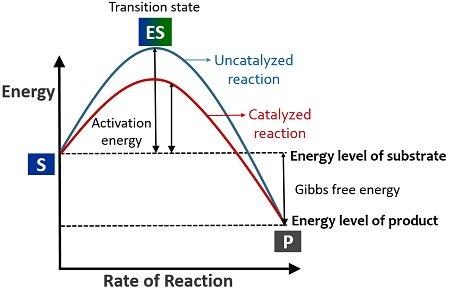 Catalysis: Any chemical reaction, which uses a biocatalyst or heat energy to contort the substrates into products, is the process called catalysis. Substrate transforming into the products solely by the heat energy comes under the category of the uncatalyzed reaction.

Oppositely, substrates contorting into products by the participation of a biocatalyst (enzyme) comes under the category of the catalyzed reaction. Enzymes lower the activation energy or increase the reaction rate (conversion of substrate into a product).

Free energy: In terms of enzymology, free energy or Gibbs free energy is the potential difference between substrates and products’ energy level. It is denoted as ∆G.

It was pioneered by a scientist named Emil Fischer (in 1894), which explains the enzyme’s mechanism. According to this model, an active site is a region of the enzyme, which bears a specific shape or conformation.

Lock and key hypothesis have a simple approach, which says that the particular substrate perfectly fits into the enzyme’s cleft (active site) for the reaction to occur. Similarly, the way one specific key fits into the notch of a lock and unlocks it. 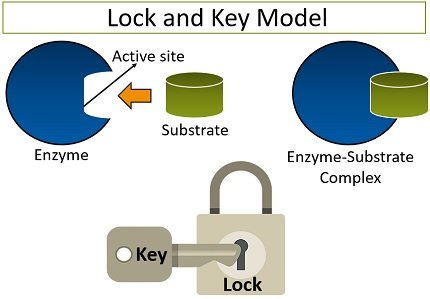 The amino acid residues enable the enzyme’s active site to bind specifically with the substrate. Thus, this model explains an enzyme’s specificity to which only the substrate can bind those with a shape corresponding to an active site’s shape. The lock and key model has many loopholes like:

It is the widely accepted model to study the mechanism of enzyme action and pioneered by the scientist Daniel Koshland (in 1959). According to his theory, an active site is a flexible region of the enzyme, which can undergo conformational changes. It is also popular by the name of the hand in glove model.

The induced-fit model explains that the enzyme’s active site possesses two specific locations (buttressing and catalytic site). The substrate initially attaches to the buttressing region, after which the catalytic site brings some conformational changes in the E-S complex. The conformation changes result in the breaking of various bonds between the two and cause the product’s formation.

After the catalysis, the enzyme becomes free to carry out the new cycle of converting the substrates into the products. Thus, the induced fit model compensates for the lock and key theory’s loopholes by explaining the broad specificity of an enzyme and the catalysis of the reaction.

Leonor Michaelis and Maud Menten gave an equation in 1913 to explain the mechanism of enzyme action. It depends upon the lowering of activation energy. According to Michaelis Menten’s equation, the enzyme-substrate complex can reversibly dissociate into (enzyme plus substrate) and further proceed to give (enzyme plus product). 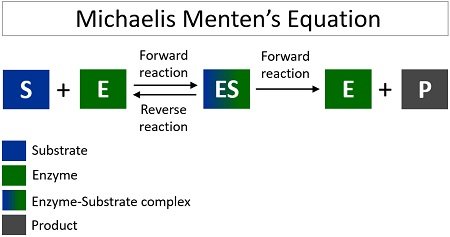 The Gibbs free energy will not change even by the participation of an enzyme. Therefore, the Gibbs energy for both catalyzed and uncatalyzed reactions will remain the same. Thus, this model also explains the speed of the reaction.

We can conclude that the mechanism of enzyme action is to lower the activation energy or speed up the substrate’s interconversion into a product. No chemical reaction does not utilize enzymes, unlike substrates, or the enzymes remain free to carry out more chemical interconversions.