Protein is an element that is required to develop life forms, so a cell must translate specific proteins. Therefore, for proper growth and cell development, gene translation or protein synthesis is necessary.

Messenger RNA is a gene product formed as a result of DNA transcription. It functions as a “Guide” that contains all the information to start the process of translation. In this context, we will discuss the definition, types, structure and functions of the mRNA, and its synthesis pathway.

Messenger RNA refers to an RNA sub-type that carries the specific codons corresponding to the DNA template and helps in the sequencing of amino acids to build various proteins by associating with the transfer RNA and ribosome.

Messenger RNA exists as a short, single-stranded molecule that comprises a sugar-phosphate backbone. Therefore, m-RNA serves as a DNA transcript that contains the information for the gene translation into protein. The formation of prokaryotic m-RNA is less complicated than the eukaryotic m-RNA.

Based on mRNA synthesis, the DNA transcribes into pre- mRNA and later transforms into a mature mRNA. 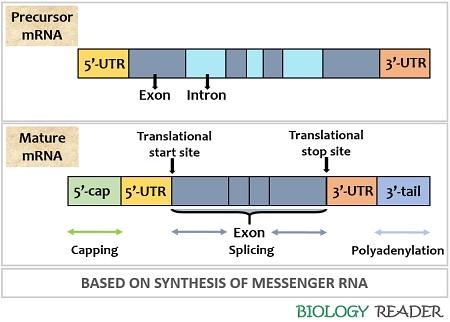 It is an acronym for the term “Precursor mRNA”. Pre- mRNA refers to the primary transcript or immature mRNA, which belongs to the group of heterogeneous nuclear mRNA. Precursor mRNA comprises both coding exon sequences and non-coding intron sequences. During its processing, the unwanted sequences or introns splices out of the mRNA strand in two ways:

Further modifications in the pre- mRNA convert it into a mature mRNA transcript. Therefore, mature mRNA is derived after the maturation of pre- mRNA. Unlike pre- mRNA, it lacks introns.

For the translation of amino acids into proteins, 5’ capping and later tailing at the 3’ prime occurs in the mature mRNA. After processing, the mature mRNA exits the nucleus and enters cytosol.

Then, the t-RNA plus ribosome decodes the information carried by mRNA to build proteins accordingly. Based on protein expression, the mRNA is categorized into the following types: 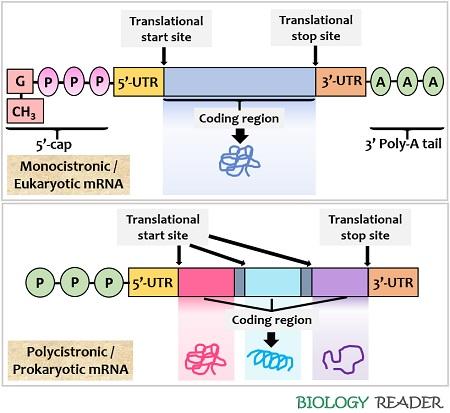 The structure of mature mRNA includes the following elements:

The coding region begins with a “Start codon” (AUG) and ends with the “Termination codon” (UAA, UAG and UGA). Internal base pairs maintain the coding region. The coding region also functions as a regulating sequence, exonic splicing enhancer and inhibitors in the precursor mRNA.

A mature mRNA comprises a polyadenylated tail (up to 150-250 adenine bases) after the 3’ untranslated region. The Poly (A) tail performs the following functions in the mature mRNA:

A mature mRNA also comprises a 5’-cap before the 5’ untranslated region. The 7-methylguanosine cap associates with the 5’ end via 5’-5’ phosphate linkage, and it performs the following functions in mature mRNA:

The messenger RNA performs a functional role in the process of gene expression by participating in the following tasks:

Therefore, the enzymatic activity of RNA polymerase on the DNA strand forms the mRNA (a sub-type of RNA). The messenger RNA transcription occurs from the 5′-3′ end, and its further processing occurs before translation.

The transfer RNA in the cytosol possesses one specific anticodon arm that decodes the coding sequence of mRNA. After appropriate sequencing of amino acids, the transfer RNA loads the amino acids onto the ribosome, which results in protein synthesis.