The anther is a part of the flower’s male reproductive system or stamen. It carries the reproductive structures or the male gametes (pollen grains), which germinate and cause the fertilization of an ovule. A male reproductive part of a flower typically consists of two elements (filament and anther).

A filament appears as a long, slender and stalk-like structure found in the stamen. Anther has a bilobed structure that carry pollen grains in the pollen sacs. A filament of a stamen emerges out from the thalamus or peduncle and gives rise to a knob-like anther.

The number, length and position of a stamen can vary within the different range of flowers. In this context, we will discuss the definition, structure, types, functions and important events related to the anther.

The anther is a structure found in the male reproductory part of the flower refers to as “Stamen” or “Androecium”. It has a knob-like structure, which usually consists of two lobes joined together by the connective tissue. It carry the pollen grains within the microsporangia, which further develops into a pollen sac.

To understand the detailed structure of an anther, we must focus on its external and internal structure as well. Morphologically, an anther is a knob-like, bilobed, where the connective tissue connects both the lobe. 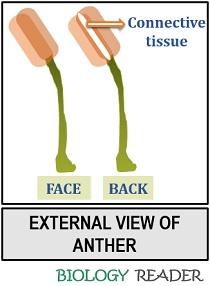 But, if we look at the transverse section of an anther, we will come to know about many of its exciting features. As we could see in the diagram that the anther consists of two lobes and four chambers. The parenchymatous connective tissue separates the two lobes, and each lobe contains two thecae, which means an anther is dithecus. The external longitudinal groove or stromium separates the four chambers. 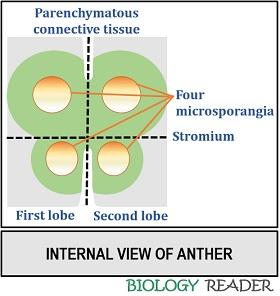 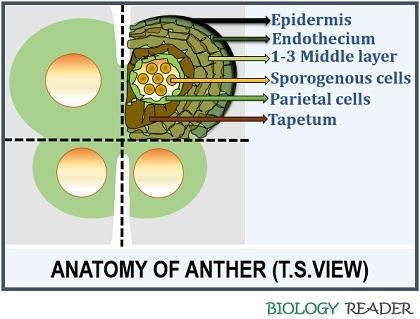 It is classified into many kinds, based on its structure and attachment with the filament. 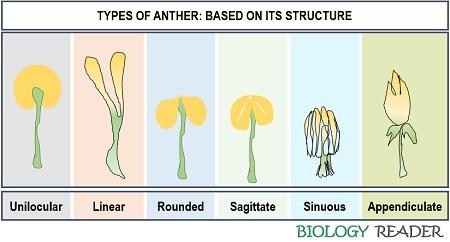 Based on Attachment to the Filament 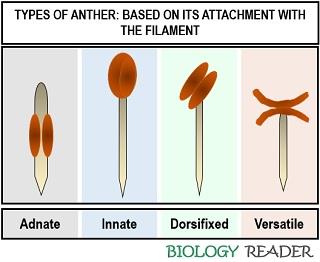 The functional role of an anther can be understood by knowing the distinct role of the individual components:

Anthesis: It refers to the process during which the anthers dangle out from the spikelet of the growing flower. The process of dehiscence occurs during the stage of anthesis when a flower attains maturity.

Dehiscence: On maturation, the anther burst out by discharging pollen grains. Thus, pollen release from an anther is a process that refers to the “Dehiscence”. Based on the direction of dehiscence, anther releases pollen grains in the following ways: 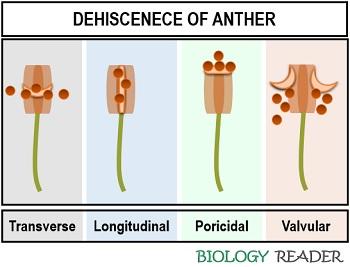 Pollination: It is also involved in the process of pollination, where the pollen grains released due to dehiscence are captured by the stigma via pollinators.

Thus, an anther plays a crucial role in flower fertilization and development.