It uses microorganisms like bacteria, algae and light energy (sunlight) to stabilize the wastewater. The oxidation pond is constructed 1-1.5 m deep inside the soil and provided with inlet and outlet systems.

Earlier, symbiotic algae and bacterial growth were used to treat the wastewater under the act of sunlight. Later on, it was found that not only the algae-bacterial association but also the fungal growth can purify the industrial effluents or raw sewage.

San Antonio Pond was the first oxidation pond used for the land disposal of wastewater. In this context, we will discuss the definition, mechanism, process, advantages and disadvantages of the oxidation pond.

Oxidation pond refers to the stabilization pond stabilizing the domestic, trade, industrial wastes etc., by the microbial interaction (primarily bacteria and algae). It seems like a large shallow pond with 2-6 feet height of water body. Oxidation pond requires the presence of sunlight and oxygen for the secondary treatment of domestic and trade wastes.

The secondary treatment of the organic and inorganic waste coming from raw sewage and industrial effluents is necessary. The direct disposal of the wastewater to the aquatic system can affect the life of water bodies and the quality of water as well.

The mechanism or working of the oxidation pond can be made simple by understanding the following steps: 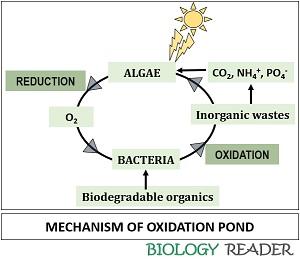 From the above two mechanisms, it is clear that the algae and bacteria work mutually to fulfil each other’s requirement. The bacteria use oxygen released by the algae to oxidize the biodegradable organics. The oxidation of organic waste by the bacteria releases carbon dioxide. Later, algae harness carbon dioxide to reduce inorganic wastes like nitrogen, phosphorus compounds etc.

The process involved in the conversion of industrial and domestic wastewater into simple form includes: 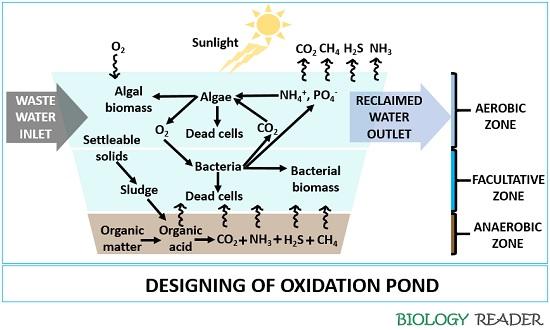 Secondary treatment of wastewater in an oxidation pond requires the following environmental factors:

Sunlight: It is necessary for algal growth that utilizes the inorganic wastes produced by the bacteria. Algae release oxygen only in the presence of sunlight, and the bacteria use this oxygen to oxidize more organic matter.

Among these microorganisms, bacteria and algae dominate and convert organic matter by reduction-oxidation reactions. Some organisms compete in a stabilisation pond, and some live symbiotically to convert the wastewater influent into reclaimed effluent.

Oxygen: For the oxidation of biodegradable organic waste, there must be considerable demand for oxygen. The bacteria need oxygen to convert the organics into simple inorganic compounds. The heterotrophic bacteria fulfil their oxygen requirement through the oxygen released by the algae and the atmospheric oxygen.

Wastewater quality: The quality of wastewater is a factor that decides the type of treatment method that has to be employed. Initially, the stabilization pond treats the strong industrial organic wastes. Domestic wastewater can be subjected to tertiary treatment.

Usually, an oxidation pond can hold water up to 0.3m  and settled sludge up to 0.02m. The decomposition of bio-organics produces a foul smell, due to which the stabilization pond is kept away from the residential areas. The use of sodium nitrate avoids foul odour during wastewater decomposition.