A pedigree analysis chart provides an important tool to study the inheritance of genes. It also gives precise information about the family members through diagrammatic representation. Sometimes, it is also known as the “family or genealogic tree“.

It gives an idea to understand the mode of inheritance of human traits and diseases. This post mainly focuses on the definition, symbols, types, examples and importance of the pedigree chart. You will also get to know the points to read the pedigree chart.

It refers to the genetic representation that depicts the family tree or biological relationship between individuals of the new generation and their ancestors. A pedigree chart also entails information about genetic disorders in the family history. It helps in studying different patterns of inheritance and genetic traits of different individuals.

In other words, we can define that pedigree analysis as an analytical method, displaying data on the heredity of traits and disorders. It uses specific symbols to represent the type of individuals and their relationship with each other. 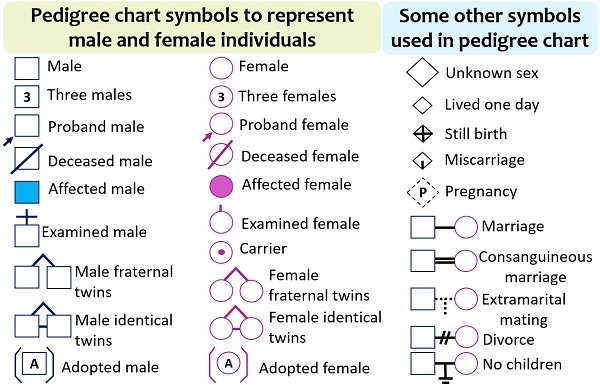 An arrow pointing towards the symbol indicates proband individuals or they usually have the disorder of interest. A slash through the symbol represents deceased individuals.

A line between the two symbols and two arrows merging at the top represents identical twins. A letter ‘A’ within the symbol and double brace indicates an adopted child.

Besides these, other symbols are also illustrated in the above diagram. You can memorize all the symbols given in the diagram above to analyze the heredity of traits and disorders in the family history.

Depending upon the patterns of inheritance, a pedigree chart has four different types. 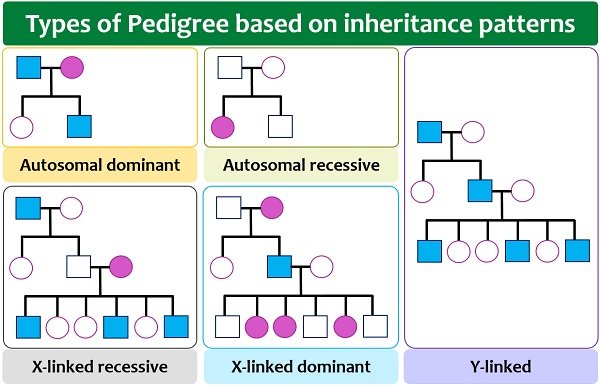 How to Read a Pedigree Chart

To read a pedigree chart, you must follow the given protocol:

General pattern to prepare a pedigree chart: Numbering of individuals is always done from left to right. Roman letters indicate the number of generations. A square depicts the male individual. Circles represent female individuals, and a diamond icon represents an unknown individual.

Let us take some examples to solve the pedigree problems or to identify the type of pedigree. 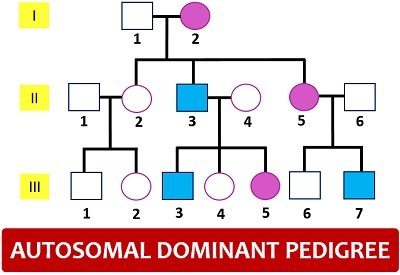 Starting from the left, you can see unaffected parents have unaffected offspring in the F-3 generation, which is also a dominant trait. In the other two relationships, you can see that the ratio of affected males and females is similar, which indicates an autosomal inheritance.

Here, a diagram depicts that parents of the first family are unaffected in the F1 generation, but the daughter acquires the disease in the F-2 generation. For a recessive trait, a parent doesn’t need to have the trait, but they can produce affected children. 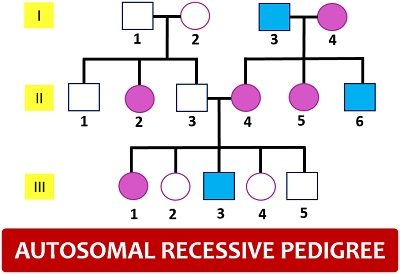 Now, look into the second family in the F-1 generation. All progenies of the F-2 generation acquire the disease due to the affected mother and father, a feature of recessive trait where two affected parents will always produce affected children.

Then, look into the interrelationship between the individuals of the F-2 generation. Individual number 3 and 4 indicates a couple, and they produced infected male and female child in the F-3 generation. Here, in this pedigree, you can see that the ratio of affected males and females is almost the same, which indicates an autosomal inheritance. 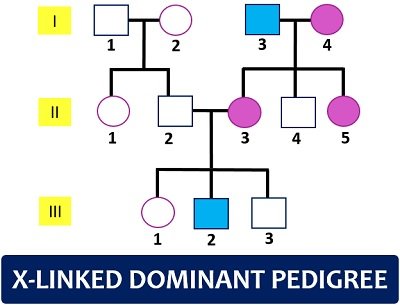 We have already discussed that X-linked dominant traits transfer from an affected father to all daughters, and male to male transmission does not occur. Then, look into the interrelationship between the individuals of the F-2 generation.

Individual number 2 and 3 indicates a couple. Again, recall a dominant trait feature where the affected individuals must have one affected parent. So, this scenario confirms that the pedigree shows the dominant trait, not recessive.

Here, you can see a crisscross pattern between individuals in each generation, indicating a sex-linked inheritance mode in this pedigree chart.

As you can see in the diagram, the infected mother of the first generation has transferred the disease to her sons in the F-2 generation. We have already discussed that X-linked recessive traits inherit from an affected mother to all sons. 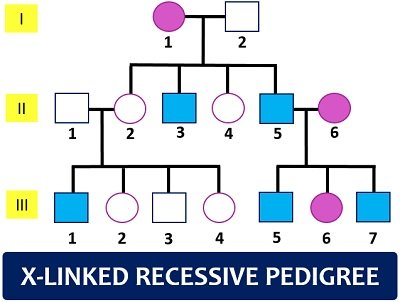 Then, look into the interrelationship between the individuals of the F-2 generation. Individual number 1 and 2 indicates a couple. Both parents are unaffected, but the disease has occurred in the F-3 generation, which shows a recessive pattern.

Then, the affected couple (numbers 5 and 6) transfer the disease to all individuals of the F-3 generation, which is again a feature of the recessive trait. Here, you can see more infected males, indicating a mode of sex-linked recessive inheritance. 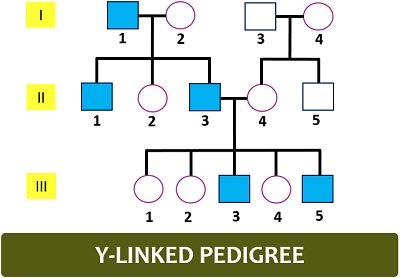 The second family in the F-1 generation has an unaffected father, so the disease will not transfer to the male individual of the next generation. Then, look into the interrelationship between individuals of the F-2 generation.

Individual number 3 and 4 indicates a couple, where an affected father transferred the disease to his sons in the F-3 generation. You can only see the affected males in this pedigree, which indicates a sex-linked inheritance.

Pedigree analysis reveals the family history by studying the inheritance of traits and diseases between family members across generations. It also helps in genetic counselling. Besides, it determines the dominant or recessive nature of the trait.

The pedigree chart also entails the type of chromosome (autosomal or sex). We can also identify genotypes as well as phenotypes of family members. Determining the probabilities of phenotypes in future generations becomes easy through pedigree analysis.