Prions are the sub-viral agents, which function as proteinaceous infectious particles without a genomic RNA or DNA. They are the mysterious pathogens whose accumulation within neurons cause severe fatal and transmissible neurodegenerative diseases in humans and animals.

Prions solely possess PrP proteins. The term prion was coined by a scientist named Stanley Prusiner. Prion diseases are very infrequent but always fatal. Prion cause abnormal folding of the normal cells in the brain.

The symptoms of prion infection progress rapidly, which requires proper medical care to control the dissemination of infection. This post describes the meaning, structure and replication cycle of prions. You will also get to know the diseases associated with prions with diagnosis and control measures.

Prions refer to the misfolded proteins or the infectious particles, transforming the normal cells into infectious variants by some unknown mechanism. They are smaller than viruses (only observed through electron microscopy). Prions cause pores in the tissues of the brain, thereby giving it a spongy architecture. As a result, prions prevalently cause various forms (hereditary, infectious and sporadic) of neurodegenerative diseases in humans and animals.

Prions aggregate into the abnormal proteins known as amyloid fibres. The abnormal protein fibres or amyloid plaques accumulate in the infected site and ultimately cause deterioration of the cell tissues due to entanglement of neurofibrils, leading to cell death. The prion aggregates are structurally stable and resistant to many chemical and physical agents.

It is a cellular, non-infectious and common endogenous prion protein, which primarily affects the central nervous system and various bodily tissues. PrPC is well defined in structure. It mainly possesses an alpha-helical structure and consists of 209 amino acids (in humans) with one disulfide bond.

The normal state of prion has a molecular mass of 35–36 kDa. PrPC protein is non-sedimentable. The normal form of prion is sensitive to cellular enzymes. Proteinase K readily digests the PrPC protein.

PrPC undergoes structural changes and misfolds into a PrPSC state. It possesses a high proportion of β-sheet structures instead of normal α-helices. PrPSC is the infectious state resulting in amyloid plaques formation, which ultimately leads to neurodegeneration.

Here, SC refers to scrapie (the prototypic prion disease). It is certainly polydispersive in structure. The mechanism of changing a normal prion to the misfolded or abnormal state is still unknown.

However, the abnormal state transmits its infectious properties by collapsing with the nearby protein molecules, thereby turning them into the infectious state. The misfolded structure of PrP shows resistance towards the enzymatic activity of proteases that can degrade proteins.

PrPSC protein-fibre ends function as a template, where the free protein molecules may attach, to grow the fibre. The amino acid sequence of the infectious PrPSC incorporates into the normal variants of protein in the growing fibre.

Heterodimer model: It explains how prions replicate via protein only. This hypothesis predicted that an infectious PrPSC molecule interacts with a normal PrPC molecule and mediates its transformation into PrPSC. Then, the two PrPSC molecules segregate to transform more PrPC into the abnormal PrPSC molecules. 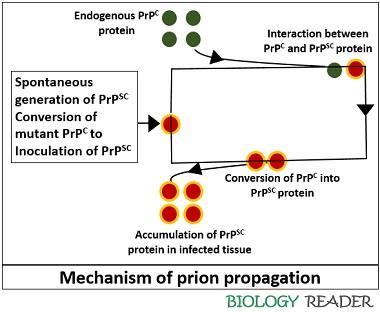 After the conversion and propagation of prions, the aggregated infectious particles form amyloid fibres that accumulate in the infected tissue as amyloid plaques.

Therefore, it is believed that the abnormal form of prion PrPSC originates spontaneously and transmits through various ways like food ingestion and mechanical transmission. It directly interacts with an endogenous PrPC protein and enables its structural distortion.

The mechanism behind the conformational change is still not clear. However, it is believed that the cellular protein (Protein X) is associated with the transformation of PrPC to PrPSC.

The replication mechanism of prions creates implications in drug designing because of its long incubation period. An effective drug can slow down the exponential growth of prions by binding to the fibril ends and blocking them from growing further.

Prions are infectious particles, which primarily cause neurodegenerative disorders in both humans and animals. 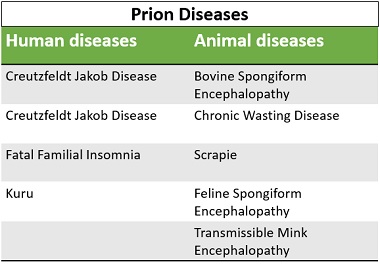 Risk factors for prion disease include:

The diagnosis of prion disease includes:

The products must be labelled that contain rendered cattle or sheep. Manufacturers must prevent ruminant products from being mixed with the rendered products. You should take proper precautions by maintaining proper sanitation. If anyone is dealing with any neurological disorder, that person should not donate his organs or tissue.