Riboflavin or Vitamin B-2 belongs to the Vitamin-B group, which are of eight kinds viz. vitamin B-1, B-2, B-3, B-5, B-6, B-7, B-9, B-12. It plays a crucial role in conversion and breaks down of protein, fats and carbohydrate to produce energy. Vitamin B-2 converts complex carbohydrates, proteins and fat into simple sugar, amino acids and fatty acids by producing an energy molecule ATP, which is known as “Energy currency” of the cells to function.

“Vitamin B-2” is a common name of Riboflavin which helps in the cell growth and function. In the structural moiety of vitamin B-2, the alloxazine tricyclic ring is present. 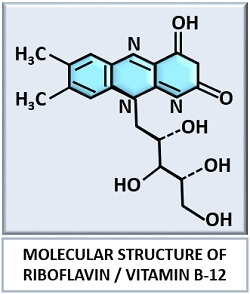 There are certain properties of vitamin B-2, which are mentioned in the table given below:

The functions of riboflavin include:

The symptoms appear just after a few days, according to the Journal of Clinical Nutrition.

Riboflavin is an essential dietary supplement which sufficient intake is necessary for our body. According to Oregon State University, the RDA (Recommended Daily Allowance) provides a reference amount of riboflavin per day, which is given in the table: 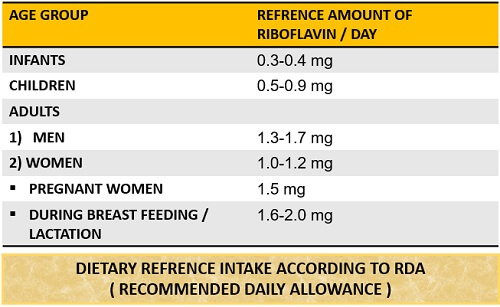 In terms of Estimated Average Requirements (EARs), riboflavin intake for men and women ages 14 are up to 1.1 mg and 0.9 mg per day, respectively.

Thus, RDA and EARs provide an estimated uptake of vitamin B-2 and collectively refers as “Dietary Reference Intakes”. The top five foods which are rich in vitamin B-2 are beef liver, yoghurt, milk, spinach and almonds contains 3mg, 0.6mg, 0.4mg, 0.4mg and 0.3 mg respectively.

Therefore, people with vitamin B-2 deficiency must add vitamin B-2 rich foods to their diet. 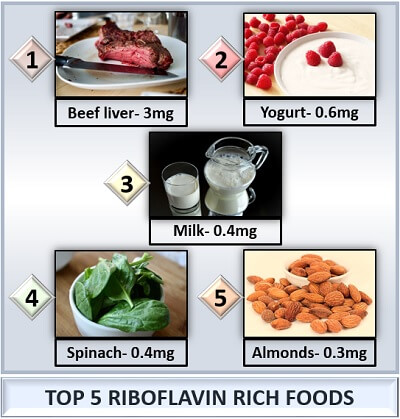 According to the University of Maryland Medical Centre (UMM), Excessive intake of vitamin B-2 can cause the following side effects like:

To maintain the level of vitamin B-2, a physician prescribes to take vitamin-B complex in which Vitamin B-2 is given in combination with other vitamin-B molecules. 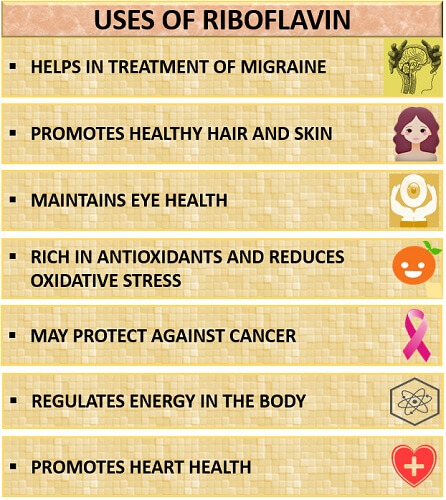 Helps in the treatment of migraine

High dose up to 400mg/day is recommended for the person who experiences severe migraine attacks. Vitamin B-2 reduces the pain and frequency of the migraine.

Nowadays, Vitamin B-2 is used in combination with magnesium and coenzyme Q10 as a remedy or to manage the symptoms of migraine.

Vitamin B-2 maintains the level of collagen in our body, which is necessary to live young with healthy skin and hairs. Its deficiency can make you look aged. Vitamin B-2 also reduce the slow signs of ageing, skin inflammation etc.

Deficiency of Vitamin B-2 can cause eye impairment like glaucoma. Glaucoma is an eye disease in which a person loses his eyesight. In addition to glaucoma, eye cataracts, keratoconus is also common in case of riboflavin deficiency.

Thus, Vitamin B-2 maintains eye health for which riboflavin drops apply to the surface of the cornea. Vitamin B-2 then penetrates through the cornea and increase its strength.

Vitamin B-2 is rich in antioxidants which control the presence of free radical within our body. Vitamin B-2 secretes glutathione which is an antioxidant that detoxes the liver.

Riboflavin also prevents a certain type of cancer like colorectal cancer, oesophageal cancer, cervical cancer etc. It minimizes the effects of carcinogens and the presence of free radicals.

Vitamin B-2 produce energy in the form of ATP as a result of carbohydrate, protein and fat breakdown that are present in the food. Thus, Vitamin B-2 converts nutrients of food into energy that a body can utilize.

In simple words, Vitamin B-2 maintains the metabolism of our body.

Anaemia is a clinical condition that results by a decrease in RBCs production. Vitamin B-2 helps in the steroid and RBCs synthesis. Thus, Vitamin B-2 aids in the treatment of anaemia, which includes symptoms like fatigue, shortness of breath etc. Along with anaemia, Vitamin B-2 also controls the level of homocysteine in the blood.

Vitamin B-2 regulates thyroid and adrenal activity. Along with this, Vitamin B-2 also helps in the recovery of chronic stress.

Recent studies have shown that Vitamin B-2 can also minimize the consequences of neurological disorders like Parkinson’s disease, multiple sclerosis etc.

Therefore, people with high homocysteine should eat as much as fruits and green leafy vegetables, rich in vitamin B content. Hence, Vitamin B-2 prevents heart disease, as they act as an antioxidant, which reduces the oxidative stress or removes free radicals from the body.