SOS repair or “bypass” or “Emergency” repair is one of the DNA repair mechanisms introduced in 1975 by a scientist named Miroslav Radman. SOS repair primarily recovers the DNA damage caused due to environmental stresses. It serves as a regulatory system, which comprises many complex inducer proteins that repair the damaged DNA.

SOS system also includes a repressor protein, namely LexA. The RecA protein floats around the cell, which regulates the activity of LexA protein. The RecA regulatory protein mediates the repression or expression of LexA repressor.

“SOS response system” refers to the mechanism in which an organism initiates the production of activator protein (RecA), which results in the dissociation of  LexA repressor and activates the SOS inducer proteins.

SOS repair system is an error-prone mechanism, as it works without a DNA template. In this context, we will discuss the definition, elements, principle of SOS repair along with the mechanism of SOS inactivation and activation.

SOS repair refers to the DNA repair system, which uses RecA regulatory protein to inhibit the repressor’s activity and activate the SOS inducer genes to recover the DNA damage. It stands for “Save Our Soul”. The SOS system remains repressed until the conversion of RecA protein into RecA protease. It does not repair the DNA damage completely but provides tolerance ability to the affected organism. 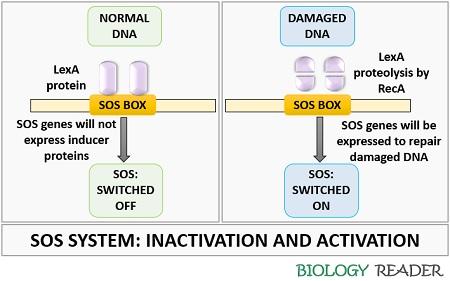 In normal DNA, a bacterial cell does not need DNA repair genes to be activated. Thus, there should be some controller that must control the expression of such genes. LexA acts as a repressor protein that binds to the particular site of DNA or SOS box. The binding will repress the activity of SOS genes.

But in mutated DNA, the inactivation of LexA repressor becomes necessary to induce the expression of SOS genes. RecA acts as an activator of SOS genes in the SOS system, which causes proteolysis of the repressor protein and allows the SOS genes expression into different DNA repairing inducer proteins.

An SOS system composed of the following components:

The mechanism of SOS repair is a complex cellular process mediated by the organism itself. It includes the following steps: 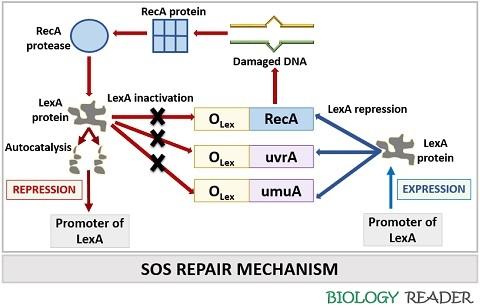 An SOS system always switches off when a DNA is healthy. The LexA promoter produces LexA repressor protein. The association of LexA repressor to the consensus sequence (having 20 base pairs of the SOS-box) suppresses the functioning of the SOS system. Thus, LexA blocks the SOS box, which arrests the activity of SOS genes that participate in the recovery of damaged DNA.

The SOS repair system comes into action when the DNA is not normal, and all the repair system fails. The organisms activate the SOS system by themselves in response to the damage against UV-light or any other factors. 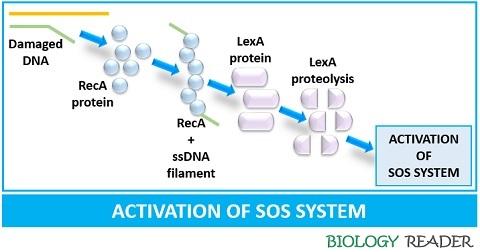 SOS system only activates in case of excessive DNA damage, leading to single-strand breakage at the replication fork. This DNA damage activates the RecA regulatory protein that links with the single stranded DNA through the cellular energy ATP.

Proteolytic cleavage is due to the conversion of RecA protein into protease, which suppresses LexA protein’s activity. The SOS box genes will now express into different inducer proteins to recover the damaged DNA.

The expression of inducer proteins will not occur all at once but express relatively to the type of DNA damage. Therefore, an SOS system switches on and off in the presence and absence of activator RecA protein, respectively.