A floral formula is one of the ways to summarise all the flower characteristics, which makes the use of discrete letters, numbers and symbols. The letters used in the floral formula indicate the members of the perianth and other floral parts.

Specific signs or symbols are also used to denote the properties like parentheses, aestivation, adhesion and cohesion of the flower. The number is the floral formula that indicates the overall number of each member within the floral whorl, starting from the outermost calyx, corolla, androecium to the gynoecium.

A floral formula can define as the numeric and symbolic expression, which reveals the flower morphological characteristics by employing different symbols, letters and figures. It is the conventional method accustomed to formulate the structure of the flower. It elucidates the information about the number of whorls and a relative relationship between each other.

The floral formula uses discrete letters, signs and figures to represent the specific feature of the flower. 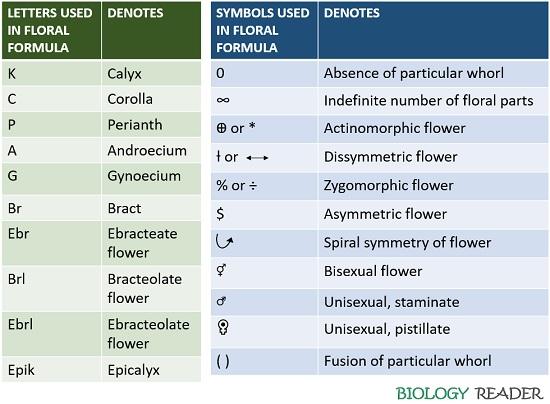 Combination of Letters, Symbols and Numbers 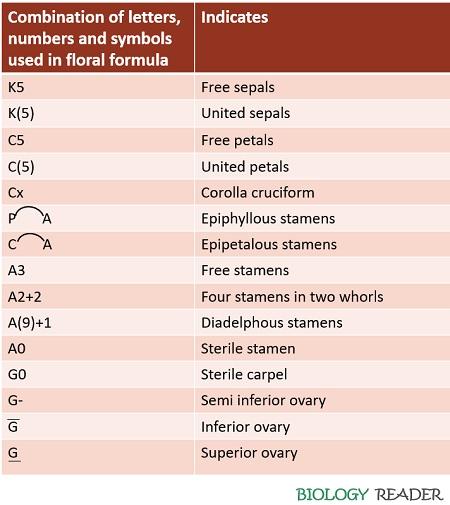 How to Use Floral Formula?

Firstly, the presence or absence of bract and bracteoles in the flowers of different families is observed and noted by using particular letters.

Then the symmetry of the flower is written according to the position of floral whorls relative to the mother axis. Flowers can be polysymmetric (actinomorphic), dissymmetric, monosymmetric (zygomorphic), asymmetric or spirally arranged. Therefore, the flowers showing different symmetry is indicated by specific symbols in the floral formula.

After that, the sex of the flower is written, i.e. whether a plant is hermaphrodite (bisexual) or unisexual. Bisexual flowers possess the male plus female reproductive parts, while the unisexual flowers either contain stamens or carpels.

The number used after the letter is placed inside bracket ( ), If the particular whorl is united. But, if the floral members remain free, then the bracket is not applied. Adnation between the floral whorls is represented by drawing a curve from the top of the letters.

‘C’ indicates the second floral whorl, i.e. corolla or petals and the number after this, i.e. 1+2+(2), represents vexillary aestivation. ‘A’ means the male reproductive part or androecium, and the number after it (9)+1 shows the presence of diadelphous stamens (includes 10 stamens).

In 10 stamens, 9 filaments unite to constitute one bundle, and the remaining one filament makes up another one. The line below the letter ‘G’ indicates the superior position of an ovary, and digit 1 shows the monocarpellary ovary.

Through this floral formula, we can identify many floral characteristics. This formula indicates that the flower is bracteate, bisexual or hermaphrodite. A letter ‘P’ indicates that the sepals and petals are undifferentiated, i.e. there are three tepals in every two whorls.

Letter ‘A’ denotes androecium, and ‘3+3’ suggests there are three free stamens in every two whorls. A line below a letter ‘G’ specifies the hypogynous condition of an ovary, and the number ‘(3)’ represents the presence of three fused carpels.