The difference between axon and dendrite lies in their shape and branching. As well as, they differ in their length and function. Axons and dendrites are the cytoplasmic projections of the nerve cell body. Both play an essential role in the conduction of nerve impulses.

Shape: Axons maintain a constant radius. Whereas, dendrites are thicker near the cell body and taper towards the end.

Branching: Axons tend to branch distally or sometimes may develop side branches. In contrast, dendrites often branch at semi-regular intervals.

Length: Axons are long and their length may vary (one meter or more), while dendrites appear shorter in length.

Function: Axons perform a primary role in nerve impulse transmission. They pass on information from one neuron to different neurons, muscles and glands.

In contrast, dendrites receive the synaptic inputs from the axon terminal. Later, they propagate it throughout the cell body or soma.

This post describes the key differences between the axon and dendrite. Also, we will discuss the definition, comparison chart, structure and similarities between the two.

Axons or nerve fibres are long and slender, located between soma and axon terminals. Group A, B and C are the three types of axon. Group A and B are myelinated, and group C is nonmyelinated.

Axon originates from the initial segment or axon hillock that seems cone-like. The cytoplasm of the axon hillock comprises neurofilaments that cluster into fascicles.

Transmission of the nerve impulse from axon to axon terminals involves the following stages: 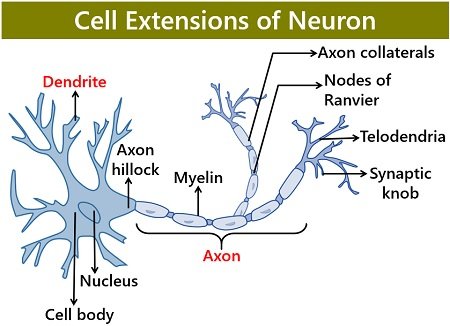 Dendrites or dendrons are highly branched processes of the soma. These lack the myelin sheath. They are shorter in comparison to axons. In uni and bipolar neurons, dendrites resemble axons.

They appear broad near the cell body and taper when extended farther away from the cell body. Dendrite branching is a biological process wherein neurons form a dendritic tree. This facilitates the formation of new synapses.

Transmission of the nerve impulse from dendrites to soma includes:

Axolemma: It is a three-layered bi-lipid cell membrane that encircles the axon. Glia cells constitute the formation of the myelin sheath.

Myelin sheath: is a multilamellar spiral of a cell membrane. It is rich in fatty-acid substances. Axons may or may not have a myelin sheath. 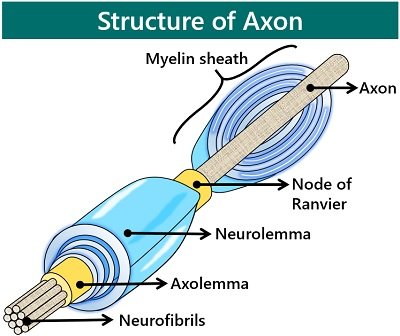 Axoplasm: It makes up the axon’s empty portion or cytoplasmic material. Axoplasm contains a cluster of microtubules and neurofilaments.

Within the cytoplasm, mitochondria are present in dispersed form. Beyond the initial segment, the axoplasm lacks RER and ribosomes.

Microfilament associated proteins (MAP) within the axons are of low molecular weight. Of all the types, tau is the most prominent MAP.

Telodendria: These are the axon’s terminal branches. Each telodendria has swollen ends that we call terminal or synaptic boutons. Axons connect with other cells at junctions known as synapses.

Receptors: The surface of dendrites contains an array of receptor proteins. These receive, process and transfer signals to soma. Receptors react to the neurotransmitters released from the upstream neurons. 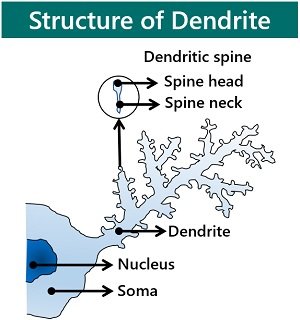 Dendritic spines: Dendrites resemble the main branch of a tree. They have several projections all over the surface that we call dendritic spines.

Dendritic spines appear as thorn-like protuberances. They function as the synaptic connections that contact with the nearby axons.

Dendrite’s cytoplasm: They comprise several microtubules and fewer neurofilaments. The MAP like MAP2 has a high molecular weight and contain positive ends towards the cell body.

Mitochondria are longitudinally arranged in dendrites. Besides that, ribosomes and rough endoplasmic reticulum are also present.

Key Differences Between Axon and Dendrite

Neurons have one cell body and two projections (dendrites and axons). The neuron’s projections contribute to the nerve impulse conduction. Here, dendrites are receiving processes and an axon functions as a transmitting unit.