Involvement in photosynthesis: Chlorophyll mainly absorbs blue and red light energy from the sun and converts it into chemical energy, whereas chloroplast serves as a site where photosynthesis occurs.

To get the idea of chlorophyll and chloroplast involvement in the photosynthetic activity of a plant system, let us suppose:

Chlorophyll refers to the primary pigment produced by the plants, which directs photosynthesis to prepare food. It functions by absorbing the light energy (sunlight) and storing the chemical energy (ATP and NADH) to perform cellular functions. Plants use chlorophyll pigments to convert the absorbed light energy and carbon dioxide into chemical energy as organic food (carbohydrate). Its occurrence is ubiquitous in all photosynthetic organisms like higher plants, protists etc. 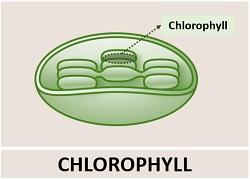 The location of chlorophyll is within the stack-like thylakoids. Generally, there are five kinds of chlorophyll, namely chl-a, chl-b, chl-c, chl-d and chl-f. Among all the types, chl-a and chl-b are the major groups that primarily take part in both light and dark reactions of the plant. The chemical structure of chlorophyll consists of the following elements:

The different groups of chlorophyll vary in their chemical composition in having similar central atom and porphyrin ring but different side chain. Chlorophyll is a fat-soluble organic molecule. Its chemical structure is more or less identical to the chemical structure of haemoglobin (oxygen-carrying pigment). Chlorophylls are also considered magnesium chlorins or tetrapyrrole pigments or chlorin pigments as they have tetrapyrrole ring.

Chloroplasts refer to the membranous structures located within the mesophyll cells and concentrated by the parenchymatous cells in the leaves. Chloroplast occurs as a site of photosynthetic activity by the plants. Its structure looks similar to the mitochondrial membrane by having: 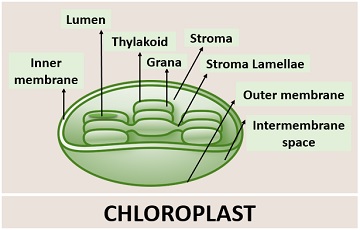 Outer smooth layer: It imports the nuclear-encoded proteins, and acts as a site for the biosynthesis of lipids and provides a physical barrier for the movement of molecules or ions.
Inner smooth membrane: It helps in synthesizing different metabolites and the cell division of cell organelles.
Intermembrane space: It represents the middle space between the chloroplast’s smooth outer and inner layer, whose diameter is about 10-20 nm.

Key Differences Between Chlorophyll and Chloroplast

Therefore, we can conclude that both the chlorophyll and chloroplasts are essential for many reasons, like:

Both play their unique role in a plant cell and works together by helping plant in many ways.