The difference between rod and cone cells is primarily due to the difference in the factors like response to light stimulus, location within the retinal system of an eye, photopigments and the type of vision they form.

Photopigments: Rods possess a single photopigment (rhodopsin), which breaks under the exposure of a wide bandwidth of light, i.e. rod photopigment is achromatic.

In contrast, cones have three distinct photopigments (L-opsins, M-opsins and S-opsins), which break down in a limited or specific bandwidth of light, i.e. cone photopigments are chromatic.

In this post, we will discuss the key differences between the rods cells along with the comparison chart. Also, the definition, structure and similarities between the two have been explained.

Rods refer to the light-sensitive photoreceptor cells in the retina, which are highly concentrated in the outer areas of an eye or outside the foveola, thereby responsible for peripheral or indirect vision. They function best in the low-light intensity and show more sensitivity towards light than the cone cells. 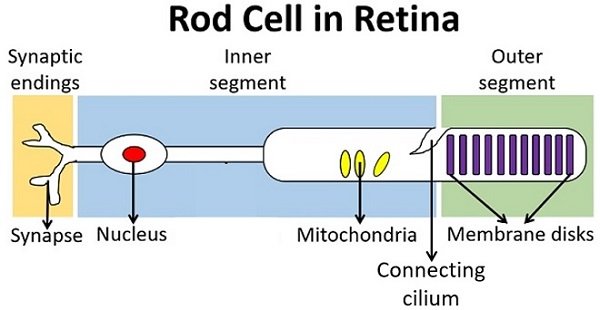 There are 120 million rods that appear cylindrical, elongated and a little leaner. Rods are responsible for the retinal sensitivity through which we can visualize things in dim light. Therefore, they give a scotopic or night vision under which everything seems in a grayscale range or black and white.

Cones refer to the light-sensitive photoreceptor cells in the retina, localized in the central region (fovea centralis) of an eye, thereby responsible for the central vision. They function best in the high-light intensity and show less sensitivity towards light than the rod cells.

There are nearly 7 million cones that appear cone-like (shorter, broader and tapered). Cones are responsible for the visual acuity through which we can perceive colour and other object specifications. Thus, they give photopic or coloured vision. 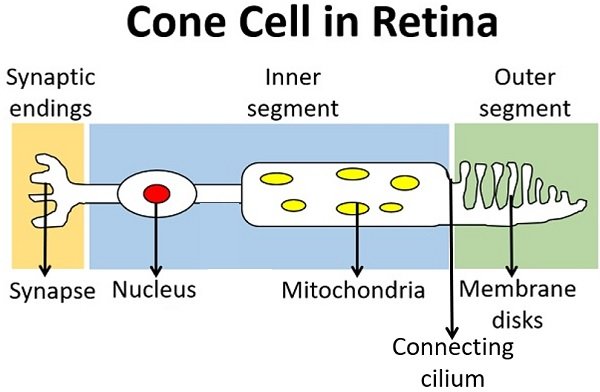 Structure of Rods and Cones

Cones have less stacked membrane disks in the short outer segment, and subsequently contain fewer photopigments. The segment disks of rods contain the photopigments (rhodopsins), which absorb a wide range of light intensities.

The segment disks of cones differ, as the cones are of three types (L, M and S cones) that contain the photopsins pigments, which absorbs a spectrum of red, green and blue light, respectively.

The photopigments in the outer segment mainly perform phototransduction by firing an action potential althrough the neuron after receiving a light stimulus.

It serves as a connecting link between the inner and the outer segment of the rods and cones. Connecting cilium is responsible for the disks morphogenesis in the photoreceptor’s outer segment.

It encompasses the cell’s nucleus and organelles like mitochondria and Golgi bodies. Thus, the inner segment contributes to the cell body of the photoreceptors, and regulates the the membrane potential and energy metabolism. It receives the electrical signals from the photopigments and stimulates the synthesis of chemical signals or neurotransmitters.

It forms a synapse that connects the nerve endings to the axon terminal of the next neuron. The neurotransmitters from the inner segment reach the synaptic terminal of the rods and cones and eventually fuse with the plasma membrane and exit the cell.

Thus, the photoreceptors communicate with the axon terminal of the adjacent neurons (horizontal, bipolar and amacrine neurons) in the second or middle layer of the retina by specific cell receptors and neurotransmitters binding, and the process is called signal transduction.

The nerve impulse goes to the specialized ganglion cells (run along the retina’s surface) that form the optic nerves. Afterwards, the visual message goes to the other parts of the brain by the help of the glial cells (Muller cells, astroglia, and microglia) in the retina.

Key Differences Between the Rod and Cone Cells

Therefore, we can conclude that the rod and cone cells perform the same function. They both are the photoreceptor cells, whose photopigments capture or react to the light stimulus and trigger the phototransduction cascade.

As a result, the photopigments fire an action potential althrough the cell body or soma towards the synaptic terminal. Despite their function, the structure of rod and cone cells is similar, except for the overall shape.