Phloem is a complex tissue of a plant, first introduced by a scientist Nageli in 1853. It is a part of the plant’s vascular system that involves the translocation of organic molecules from the leaves to the different parts of plants like stem, flowers, fruits and roots. Numerous specialized tissues (vascular tissues) contribute to a structure called phloem, which conducts the food supply in the vascular plants.

The food it carries is termed as phloem sap. The photosynthetic food is actively transported from the leaves to the other parts of the vascular plants via turgor pressure and ATP. You will get to know the definition, classification (based on the origination), structural components, important characteristics and facts about phloem.

Phloem is defined as the specialized food conducting tissue of the plant cell, which assist the conductance of food (carbohydrates and amino acids) from the photosynthesized part (leaf) to the non-photosynthesized parts (like stem, flowers, buds, fruits, roots). Therefore, it primarily translocates the soluble organic molecules like amino acids, sugars etc. as sources of food and energy to the plant’s remaining parts. The food translocation is carried out from the source tissues (leaves) to the sink tissues (stem, roots, etc.). 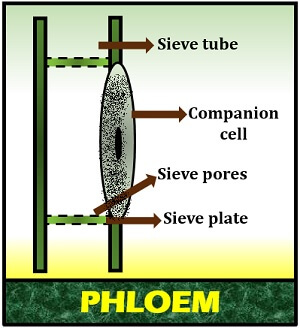 The phloem can be classified into two types, based on its origination and maturation: 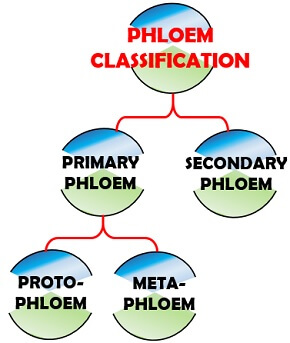 In most plants, the existence of phloem in both stem and roots is found external to the xylem. 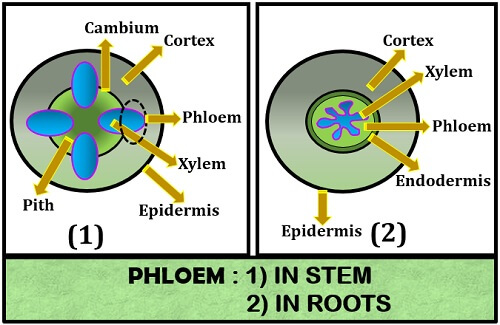 The phloem internal to the secondary xylem is called inter xylary phloem, which generally exists in two forms (either as concentric rings or radial strands).

The structural components of the phloem are as follows: 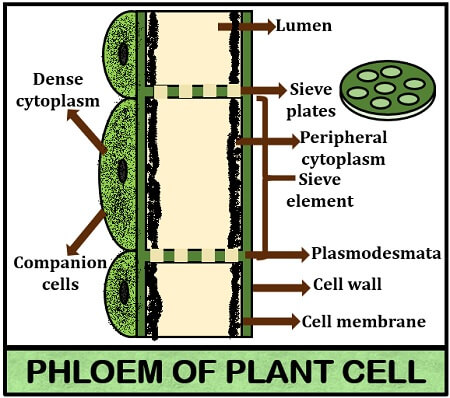 It is an essential element composed of living cells (sieve tube and sieve cells). Sieve tubes conduct food transfer. Cellulose microfibrils function as a major constituent of the sieve tube that provides mechanical strength to the sieve tube. Sieve plate also allows back and forth movement of sap through the holes.

These are also the living components of the plant cell associated with each sieve tubes. Companion cells contain its own nucleus, by which they not only control their own activity but also controls the activity of the neighbouring sieve tubes. They are also called modified parenchyma, which comprises dense cytoplasm and cell organelles. Due to the presence of cell organelles, the companion cells are metabolically very active. Companion cells release ATP for the translocation of food and thereby helps in food conductance.

Therefore, phloem helps in the translocation of food from the source (Leaves) and sinks it to the other parts that are used up for the plant’s growth and other activities.