The difference between simple and compound leaves is due to the factors like attachment of leaves to the leaf blade and the presence of lateral bud on the leaf’s axil. Simple leaves have the undivided or partly incised leaf blade. Conversely, compound leaves possess a variable number of leaflets on a single leaf blade.

Simple leaves bear axillary bud at their base, while leaflets of compound leaves lack axillary or lateral bud on their axil. They both are common forms of leaves in dicot plants.

Leaves constitute an essential part of the shoot system, which facilitate organic food production via photosynthesis. Leafs can modify or adapt themselves to different environments. But, simple and compound leaves are the two significant forms of leaves classified based on incisions in the leaf lamina.

This post describes the key differences between the simple and compound leaves, along with the comparison chart. Also, you would get to know the definition, types and similarities between the two.

They are the types of dicot leaves where a single leaf attaches to the stem’s node via petiole. Each leaf bears an axillary bud at its base or between the junction of the petiole and stem’s node. The leaf margin of simple leaves can be entire, lobed and toothed. As we could see in the diagram below, the leaf lamina has no divisions. 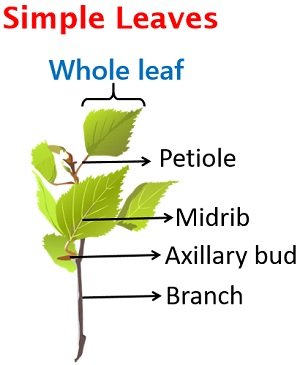 However, a midrib may possess few incisions or depressions on a leaf margin that do not touch the midrib. Mango, banana, Hibiscus and maple leaves are examples of simple leaves.

They are the forms of dicot leaves where clusters of leaves or leaflets connect to the stem’s node via a short stalk or rachis. The base of the leaflets does not bear an axillary bud. However, axillary or lateral bud is allocated between the junction of petiole and stem’s node. The leaf margin of compound leaves can be entire, lobed, parted and rolled. 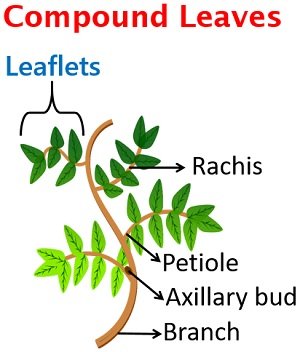 As we could see in the above diagram, the leaf lamina possesses a variable number of leaflets. Thus, a midrib is completely divided due to incisions on a leaf margin upto the midrib. Neem, rose, coriander, buckeye leaves are examples of compound leaves.

By looking into the leaf margins, we could also classify simple leaves. Leaf margin merely refers to the edge of leaves. 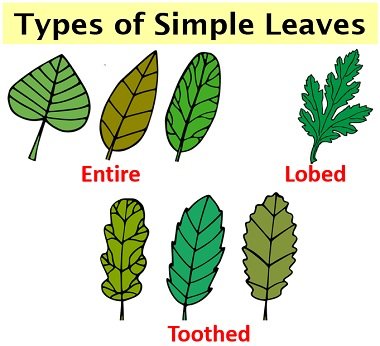 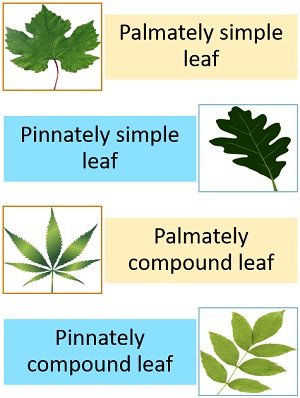 Based on the number of times incision occurs, pinnately compound leaves have the following subtypes: 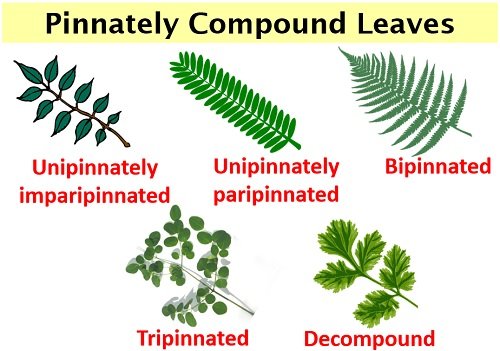 Based on the attachment of leaflets with the petiole, palmately compound leaves have the following subtypes: 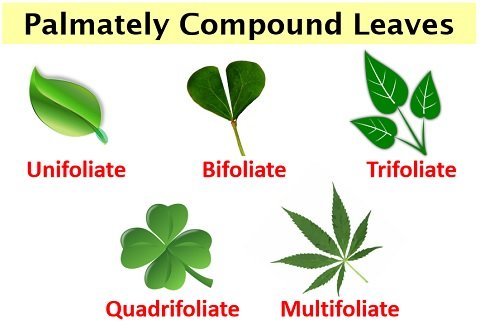 Therefore, we could conclude that simple leaves possess a single leaf blade, either entire or incised (do not touch the mid-rib or petiole). Conversely, a compound leaf has many incisions on a leaf lamina that move down to the rachis or petiole and ultimately break the leaf lamina into several segments or leaflets.