An ovary is affixed to the thalamus, and it appears as a whorl and gives rise to the formation of egg cells after the fertilization process. It contains one or multiple chambers and bears one or more ovules attached to the placenta. After double fertilization, an ovary develops into a fruit, and the wall of an ovary forms a fruit tissue or pericarp.

The ovary protrudes into a long, slender, filamentous structure called style. It connects the stigma with an ovary. Style acts as a transmitting track where it helps in the passage of pollen grains from the stigma to the ovary.

On top of style, sticky stigma is present. It traps the pollen grains and allows them to enter the ovary to facilitate the fertilization of ovules. In this context, we will discuss the definition, types and structure of the gynoecium.

The gynoecium is a term, which represents the flower’s female reproductive structure. It typically possesses three structures (stigma, style and ovary) that colloquially called “Carpel”. A carpel refers to the unit of the gynoecium, which is generally the modified leaf structure. Thus, gynoecium refers to the female reproductive unit because it bears an ovule, which on fusion with the pollen grain (male gamete), forms the egg cells. 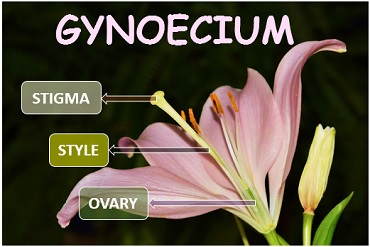 Depending upon the pattern of a carpel, a gynoecium can be of three types:

The gynoecium is the innermost whorl of a typical flower, which mainly bears three components (stigma, style and ovary). 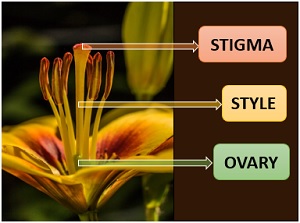 It is the topmost part of the flower’s female reproductive unit. A stigma refers to the head of the pistil, which remains exposed to the air or surroundings. The surface of the stigma can be sticky, hairy, smooth, rough etc. Due to its viscous nature, it can easily imbibe the pollen grains of the male productive system or androecium.

A stigma provides a platform for the attachment of the pollen grains. Thus, it plays a crucial role in pollination. Stigma exists in diverse shapes from simple to lobed, feathery, funnel-shaped, and branched etc. 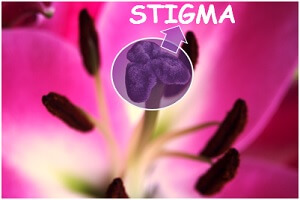 Stigma also consists of a tissue enriched with an extracellular polysaccharide matrix called “Transmitting tissue”. The transmitting tissue assists the growing pollen tube towards an ovule.

Based on location, the stigma can be fused, lobed, branched or free. When a stigma is directly present on the top of the ovary, it is called a sessile stigma. Examples: Sambucus, Berberit, Lotus etc.

Oppositely, a stigma remains free or separated in the syncarpous gynoecium. Sometimes, stigma can be lobed, bilobed/bifid (Compositae family), trifid etc. Some are branched like the begonia species, and a few are funnel-shaped like in crocus species.

It is a stalk-like and filamentous structure that acts as the joining element between the stigma and the ovary. When pollen falls onto the stigma, they start travelling down through the structure called style. A style originates from the basal whorl, i.e. ovary. 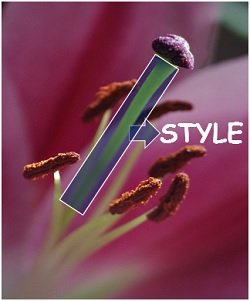 The gynobasic style originates from the central base of the ovary. Sometimes, it may present at the right angle to an ovary axis. Some flowers have stylopodium style, which appears slightly swollen and generally exists in the Umbelliferae family members.

Flowers of the Euphorbiaceae family have a free and branched style. It serves as a transmitting track (made of transmitting tissues) where the pollen tube grows.

It is the most crucial part of the gynoecium, which bears the female gametes or ovules. If a gynoecium lacks an ovary, then it is meant to be sterile or parthenogenic. A pollen grain travels down from the style to the ovary and fuses with the ovules or megasporangia to initiate fertilization. 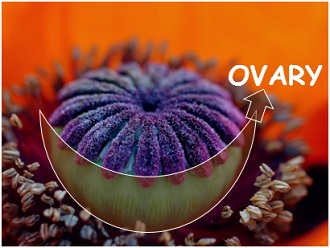 It encloses and protects the megasporangia that carry the megaspores. The ovary also provides nourishment to the developing ovule through the placental wall.

An ovary is classified into the following three types relative to its position in flower.

According to the number of chambers or locules, an ovary is categorized into the following types:

Ovules or megasporangia are located innermost to the ovary and destined to grow into a seed upon fertilization. Ovule attaches to the placenta by the funicle. An ovule is considered sessile when it lacks a funicle and directly connects with the placenta. Nucellus tissues are enclosed by the two integuments (inner and outer), contributing to the ovule structure.